In the case of Mahatma Gandhi, why is our national outrage this pronounced? 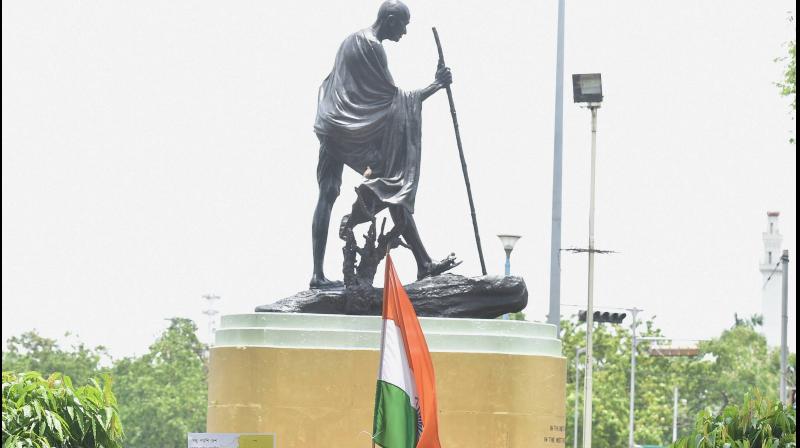 Statues of people long dead, and possibly of zero relevance to our times, should be dismissed, ignored, and removed if they have become painful reminders of something hateful in the past. PTI Photo

As kids, I’m sure most of us have played a game called “Statue”.  It was a meaningless little game that involved participants “freezing” when the word “statue” was yelled out by the group leader. It was my least favourite kiddie game. Standing still? Awful! Being static is no fun at all! Least of all for energetic little kids, rushing around and creating havoc.

Frankly, these days all things “statue” are no fun even for adults.

They are giving grief to so many people across the world. But why?

Statues of people long dead, and possibly of zero relevance to our times, should be dismissed, ignored, and removed if they have become painful reminders of something hateful in the past.

But for that, those vandalising statues with such venom and josh must know the past! I wonder how many of the rowdies rushing around with red or black paint have even heard of the well-known or notorious people whose statues they are busy defacing.

If it’s a case of collective rage finding expression through these acts, shouldn’t we be worrying about what is causing the rage in the first place? Why not expend the time, money, energy getting to the bottom of that emotion – the uncontrollable rage? When hate becomes the driver, it’s the key to understand all that lies beneath the negativity -- and start the process of healing old wounds, calming people down, before doing anything else.

In the case of Mahatma Gandhi, why is our national outrage this pronounced? Why do we flip out so completely?

I have always felt there is an exaggerated sense of touchiness about anything to do with Mahatma Gandhi.

We take it as a personal affront if someone – and more so a foreigner -- expresses anything short of undiluted reverence when it comes to our Father of the Nation. We bristle and take umbrage, and nearly come to blows with whosoever has the temerity to “criticize” Gandhiji.

Now, please, there is a huge difference between meaningless criticism of an iconic figure in history, and an informed critique by respected historians and scholars. In our minds, it is only unadulterated praise and unconditional hero worship that matter. No mid-point. No perspective. No debate. It’s Bapu! We will not “tolerate” a single word that is not adulatory.
Quite forgetting that intolerance by itself is hardly a Gandhian quality. Debate and dissent are essential in a democracy -- no matter how elevated the person under discussion may be.

The job of public intellectuals is to go beyond the popular narratives, to analyse, scrutinise, research multiple sources, and present their views fearlessly.

Those who are open minded and receptive to a fresh way of thinking will get a new insight into the subject -- and that is the whole objective, surely? Gandhiji will not cease to be Gandhiji if someone somewhere does not like him. Or calls him a racist.

We have far too many sacred cows in India and far too little knowledge. Our obsession with erecting statues is comical, to say the least. In most countries the statues of national figures are put up after the person is dead and gone. Pointless! Like giving the posthumous Bharat Ratnas. Who cares?

The person being immortalised has passed on and missed the party in any case. Often, it’s the family members of the deceased great person who push for a statue and lobby hard with the political party in power to get it done.

Most times, the reasons are selfish -- the family wants to stay relevant by perpetuating the dead person’s memory. Most want to cash in on the goodwill. Obscure family members fear that they will be forgotten and ignored without a statue, chowk, road, bridge, culvert or fountain named after the famous relative. Aha… here’s the thing!

The politics of statues has always existed. It is our own need to seek validation for our insecure little selves – “See? That’s my great grandfather’s statue!” Ha! And see… there’s a pigeon sitting on his head, doing what overfed pigeons do.

It’s antithetical and almost absurd that in this day and age, protesters all around the globe are investing time and energy identifying villains from the world’s hoary past and going at them with sledgehammers and axes. Paint and tar.

History will remain history -- regardless of such destruction. So many of the “villains of history” are facing the wrath of irate mobs. Shoving these objectionable statues inside warehouses will not automatically obliterate the “evil deeds” committed in the past.

Mahatma Gandhi falls into a unique category. Much like the Dalai Lama. They are beyond the culture and cult of statues. They represent universal truths respected by all of humanity. Ahimsa is one of the most powerful words ever known to mankind -- but rarely observed. The very act of vandalism goes against the tenets of both their inspiring teachings.

Similarly, blind adulation does not contribute in any way to a better understanding of these personalities. Whether grand statues are erected in their honour or not, makes no difference to their position. Neither can irreverence and open criticism dent their formidable reputations. We should display more confidence and inner strength when acts of disrespect are committed by those who don’t know any better.

By insulting great minds, those minds don’t become any smaller in our eyes. The best and most constructive way to remember those we love, admire and cherish is to take their spiritual legacy forward through institutions dedicated to public service.

Why not focus on utilising the funds that are earmarked for useless statues to build hospitals, schools and colleges? To nurture centres of learning and spiritual growth?

Gandhiji will always be Gandhiji. Statue or no statue.