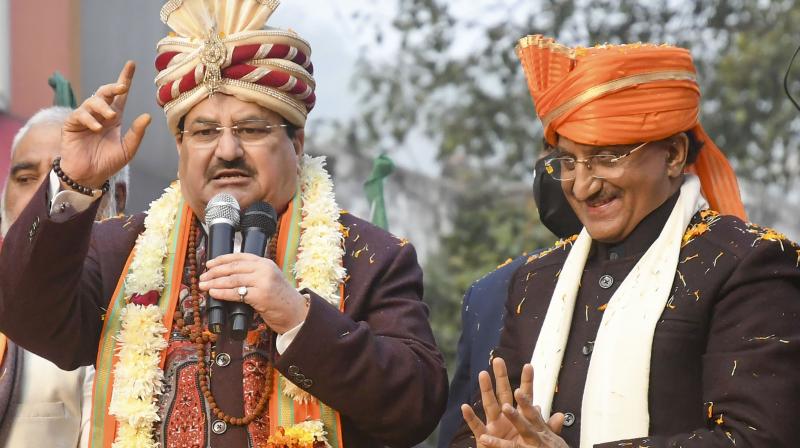 The so-called Dharma Sansad or “Religious Parliament” held at Haridwar over December 17-19 witnessed a level of hate, bigotry and open incitement to violence against Muslims that most Indians will find unbelievable. Prabodhanand Giri, the president of the self-styled Hindu Raksha Sena made a public call for ethnic cleaning of Muslims. “Like Myanmar, our police, our politicians, our Army and every Hindu must pick up weapons and conduct a safai abhiyan (ethnic cleansing). There is no other option left.” Another luminary, Pooja Shakun Pandey aka “Sadhvi Annapurna”, made a direct call for genocide. “If you want to finish them off, then kill them. We need hundred soldiers who can kill 20 lakh of them to win this.”

These are but samples of the extraordinary rant of pure vitriol and venom at this meeting against fellow citizens based entirely on religious hatred. Some facts need to be clearly understood. All these speakers had usurped to themselves the garb of Hindu religious saints. Most — if not all of them — had verifiable connections with top BJP leaders. There are videos and photographs of Yogi Adityanath and the CM of Uttarakhand genuflecting before them. None of them hid their connections with the larger Sangh Parivar. And, BJP leaders themselves — notwithstanding their subsequent claims to innocence — were present at the meeting and even addressed the gathering.

Such a dangerous and revolting display of religious hatred cannot be passed off as a one-off incident. It is a consequence of several years of nurturing and encouragement of precisely such sentiments, for which the BJP-RSS combine must accept responsibility. Much too often the members of these organisations and supporters of their divisive agenda have come out with statements that can only be seen as fuel for such a condemnable hate conflagration. Their MPs have openly expressed their admiration — even veneration — for Nathuram Godse, and their ministers have got away making statements in which they refer to Muslims as haraamzadas or bastards. Around 98 per cent of cattle lynchings since 2010 occurred after 2014; the overwhelming majority of these took place in BJP ruled states; and 86 per cent of the victims were Muslims. The BJP’s policy of blatant religious polarisation for short-term electoral dividends has led it to endorse and encourage the demonisation of Muslims and other minorities. The attempt to consolidate Hindu vote has led the BJP to aggressively conjure the “other”, against whom enmity or ill will has to be fostered. The number of BJP leaders against whom hate speech allegations exist is proof of this. The so-called religious leaders who spoke at Haridwar are a symptom of this organised empowerment over a period of time.

For precisely this reason, the gathering at Haridwar was not of fringe elements. It represented — albeit in a particularly outrageous form — the sentiments of the hard-core followers of the BJP-RSS. For too long Hindus and Indians generally have lulled themselves into complacency with the thought that some of these statements and actions are the monopoly of a few loonies, marginal elements, the odd few who are outside mainstream society. The truth is that over these last seven years the fringe has become the mainstream support of the BJP. It is the section from which the party derives its strength. Such elements are explicitly and implicitly encouraged and nurtured, and when something like Haridwar happens, the BJP makes a tokenistic and unconvincing gesture to somewhat distance itself from it.

It is not surprising then that the BJP government of Uttarakhand took days before it registered a reluctant FIR against one of the perpetrators. There was no condemnation of the event by either the state government or the central high command. An eerie silence, akin to tacit support, was the only response. The perpetrators themselves were publicly unrepentant. They knew that they had the support of the powers that be.

Hindus, in particular, need to be extremely worried by such developments. Vitriol of this nature is not confined to silos. These rabid high priests of the Hindu faith will soon tell all Hindus what to eat, what to wear, what to drink, who to meet, and how to pray. Their illiterate fanaticism will seek to rule your lives. Women will be special targets, and made to conform to what such people think are chaste Hindu naris. Those of us who say “Diwali Mubarak” will be attacked for the use of Urdu in the greeting. Celebrating Christmas will be considered un-Hindu. The self-anointed lumpen writ of such people will play havoc with the way the vast majority of Hindus wish to be Hindus.

Violent hatred of this nature is also a severe distortion of the self-assured, tolerant, dialogic and inclusive nature of Hinduism. This is an attempt to whip our sanatani faith into some kind of Wahabi creed, hysterically bigoted, insecure, and exclusionist. Hinduism is being weaponised before our very eyes only to further the political agenda of a political party. The hugely impractical and outdated goal of a Hindu Rashtra, which animates these saffron dharis, would entail either expelling our large number of minorities, which is unfeasible, or subjugate them as second-class citizens, which is a recipe for disaster. Quite apart from the violent mutilation of the Constitution, it would lead to perennial instability, unmitigated religious strife, endemic community conflict and a state of public volatility that would put an end to the peace and harmony so necessary for progress and prosperity. Is this in the interest of Hindus?

Hate speech emanating from any religious community is condemnable. It directly militates against the delicate filigree of our civilisational heritage, marked by antiquity, continuity, diversity, assimilation and peaks of refinement. The attempt to reduce Hinduism to its lowest common denominator is an assault on the sensibilities of all Hindus, and Indians. The time has come for ordinary Indians to say enough is enough. It is time also for those responsible for such outrages to understand that Indians will not be passive cannon fodder for their cynical political goals.