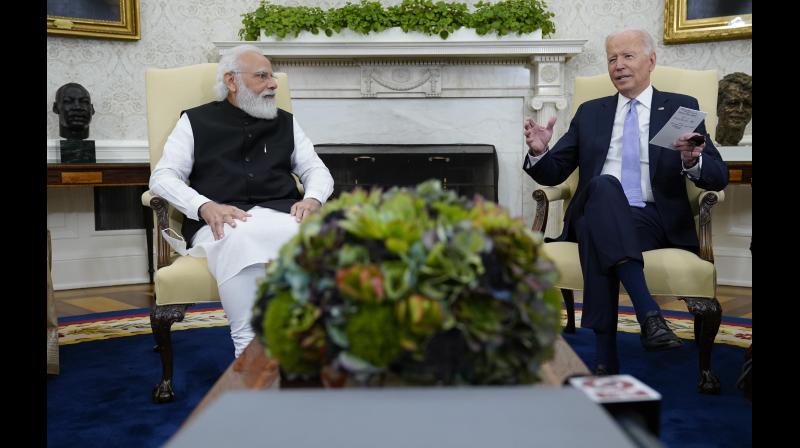 Prime Minister Narendra Modi’s September 22-25 visit to the United States, his first since the outbreak of the Covid-19 pandemic last year, covered a lot of ground. He had bilateral meetings both with US President Joe Biden and his Indian-origin vice-president Kamala Devi Harris, attended the first in-person Quad summit at the White House and also met the two other leaders of the four-nation grouping, the Prime Ministers of Australia and Japan.

The broad themes were already known as hosts United States in its briefings, as indeed President Biden in his UN General Assembly address last week, listed climate change, the Covid-19 pandemic and emerging technologies as the areas of focus for the Quad. A week earlier a new strategic grouping of Australia, Britain and the US — called AUKUS was announced, revealing that technology to make nuclear-powered submarines would be transferred to Australia. This raised the question about its impact on the Quad. It seems that the US is constructing a multi-dimensional wall to contain China. Both these groups constitute different pillars of it. AUKUS introduces a serious naval dimension to upend Chinese missile-based defence of the mainland as the existing US bases in the Pacific, in the first ring of islands, are vulnerable to attack. Australia with its nuclear submarines provides a land mass removed from this menace.

There were no surprises in the Biden-Modi meeting. It only remained to be seen whether India’s concerns over Afghanistan would get addressed. As expected, President Biden ducked the entire issue of the US military withdrawal from Afghanistan as he has a closed mind on its necessity. Both Mr Biden and Ms Harris approached the issue through the role of Pakistan in the region, particularly as an abettor of terror. Only a week earlier US secretary of state Antony Blinken had to face the ire of the members of the House Foreign Relations Committee on the role of Pakistan over the last two decades. Some members sought sanctions, and Mr Blinken promised to look into their charges. Thus, the US line is to help restrain Pakistan without direct involvement in the region, leaving India largely to its own designs.

This subtle handholding aside, both the US President and his deputy raised the need for the defence of democracy, both at home and abroad. President Biden talked of “shared responsibility to uphold democratic values” and a “joint commitment to diversity”. Indian officials dismissed questions about the US sending a strong message to the Narendra Modi government. Surely the world is aware of the Pegasus episode, involving the use of military-level malware to snoop on journalists and other foes of the Indian government.

The fact that India’s Supreme Court has had to dismiss the government’s “danger to national security” defence underscores the danger to liberty and freedom of speech.

Prime Minister Modi’s address to the UN General Assembly was well structured and delivered in the usual hybrid Hindi-English format. Besides the usual narration of Indian domestic achievements in taking banking to the common man and drinkable water to his home, Mr Modi touched on other important themes. He attacked Pakistan directly and China obliquely. He called use of terrorism as a political tool as “regressive thinking”. He warned that Afghanistan must not become a rallying ground for this. He sought open oceans, a dig at China, and a “rules-based order”. He sought reform of the United Nations as 75 years after its founding it no longer represented contemporary global reality. Implied in that is the inequity of India not being a permanent member of the UN Security Council.

Most interesting of all was the great emphasis by the Prime Minister on democracy. India, he asserted, was the “Mother of Democracy” — a claim that Greece may take issue with. In keeping with his penchant for slogans, he added: “Yes Democracy Can Deliver/Yes Democracy Has Delivered”. He chose to ignore the many complaints by the Opposition and liberal opinion in India, as indeed amongst democracy watchers abroad, that in fact India had regressed from its position as a liberal democracy under Mr Modi. He was confusing liberal democracy with electoral democracy. Yes, India has the latter, but has been slowly slipping from the norms of a liberal democracy.

An example of that has been the 10-month-old farmers’ agitation against the three controversial agricultural reform laws passed without proper examination by committees of Parliament or a division called by the Opposition while voting on them. The fact that some members of the diaspora were protesting on behalf of the farmers in Washington and the fact that this wasn’t even shown by main Indian news channels speaks of the slipping independence of the media.

Equally strange was the Prime Minister’s argument that India needs “science-based, rational and progressive thinking”. If anything, he needs to address this message to elements in his party who often go public with non-rational theories about healthcare. But underscored is the yawning gap between what is preached abroad to keep India’s image intact and the politics of the BJP at home. The subtle hints by President Joe Biden about “inclusivity” need to be taken seriously. A body of opinion in the Democratic Party holds liberal values and human rights extremely dear. It would be a mistake to treat the US advice as tokenism undertaken to appease fringe groups.

The conclusion that can be arrived at is that the Prime Minister had a good visit to Washington and New York. The Quad will continue to push back at China using its soft power of democracy and financial/technical wherewithal to supply vaccines to the world. It also needs to roll out an infrastructure development map to counter China’s Belt and Road Initiative. India will have to balance one foot in this boat with another in a Russia-Iran one to counter the Pakistan-Taliban nexus. The latter has China’s blessings, although China would be careful not to get stuck in a fresh Afghan quagmire.

India-US relations naturally got positively reviewed but some problem areas remain. Trade issues cannot be kept in abeyance for much longer. India will have to live with the Afghan mess that the US has left behind. US-Pakistan relations shall always remain an irritant as the US wouldn’t want to completely shut the door on Pakistan. The Gulf and West Asia will keep the Islamic world destabilised in parts. But India needs to fix the Jammu and Kashmir imbroglio, moderate its majoritarian instincts and harden its defences against terrorism – of both the traditional and cyber variety.