Farrukh Dhondy | Mahatma imperfect, but toppling history dooms you to repeat it

Historical outrage against a person, nation, race, religion or caste, can be proved. 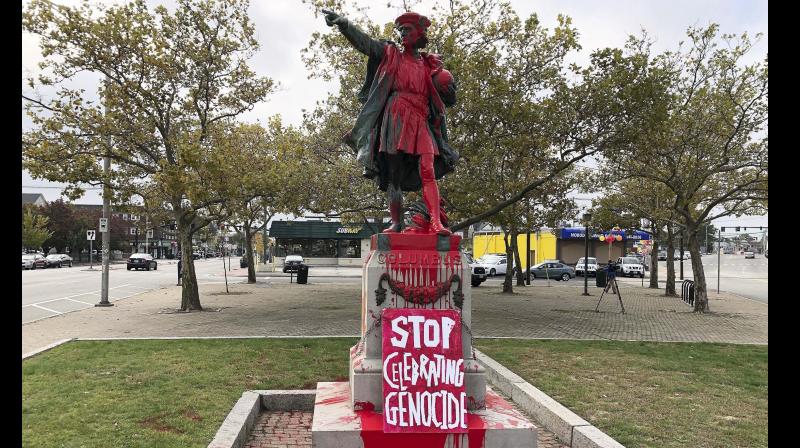 “O come with old Bachchoo and leave the lot
Of Vyas, Homer and Shakespeare forgot
Let triviality and pop lyrics prevail
Let poets spread their insights — heed them not!”
— From The Boobaiyat of Bachchoo

A slogan for the day: “Let those who are without historical fault pull down the first statue.” The living don’t traditionally have statues erected in their honour.

The exceptions are dictators with overbearing egos. Saddam Hussein’s statue was pulled down as Bush and Blair commandeered the invasion of Iraq. His claim to immortality was as vain as that of Percy Shelley’s Ozymandias. Very few in the US and Britain objected to this desecration. Winner takes all, including absolution from the sin of vandalism.

Resentment is in the mind of the resenter. Historical outrage against a person, nation, race, religion or caste, can be proved. That the statue commemorating the life and racially determined philanthropy of Edward Colston in Bristol deserved its depedestalisation (Vocabulary Copyright — fd. Very ugly invention, now get on with it — Ed.)?

He was manifestly responsible for the enslavement of, cruelty towards and untimely murder of hundreds of fellow human beings. As were in the last century, Hitler and Stalin? These were not simply responsible for the deaths of soldiers in war, but for the genocide of millions of citizens of their own country. Show me a statue of Adolf or of Yusuf Yugashvili (Stalin’s real name) and I am ready, comrades, with my pickaxe and rope.

I must admit, gentle reader, that I have been contemplating this mission to topple statues and to rename roads and buildings. Though it may sound paradoxical, I am thinking about what I think.

For instance, my good friend the historian Charles Allen, who has in the past written in praise of Rudyard Kipling and in defence of the benefits that colonialism brought, wrote a letter which the Guardian published regretting his earlier stance.

Not only that, he said he was in favour of removing the statue of M.K. Gandhi because the Mahatma (he didn’t use the word) was, while championing the rights of Indians in South Africa, in favour of certain aspects of apartheid against black people.

In London, the mob which gathered outside the Houses of Parliament to protect the statue of Winston Churchill against people who may want it demolished were right-wing thugs who called themselves ultranationalists.

These would probably be the same people who would seek to demolish the statues of Gandhi in Tavistock Square or in Parliament Square on the grounds that he was not white — or perhaps on the wider ground that he was a leader of the movement that caused the Empire to withdraw from the subcontinent.

I haven’t, as a loyal Indian nationalist, as yet received a request on social media to gather at these spots and defend the Mahatma’s statues there. I suppose one leaves that to the police under the instructions of Sadiq Khan, Mayor of London, who certainly wants Indian votes for a second term next year.

Southall in west London has a large population of Sikhs. On TV and in the news this week I saw and read about several granthis from the local gurdwaras demanding that Havelock Road in Southall be renamed because Henry Havelock was commemorated for his part in 1857-58 of suppressing what some people refer to as the Indian Mutiny and others as our First War of Independence. What seemed ironic abut the demand, coming from Sikh religious leaders, was that the Sikhs, if the several histories of that period are accurate, sided with the British East India Company against that uprising. Havelock was not their oppressor but their ally.

In my boyhood, my family lived in an army bungalow in Kanpur on Havelock Road. That was decades ago and perhaps the road has been renamed as it should be, because what did start as a mutiny of Indian mercenaries in the British army, went on to become a war in which local rulers sought independence from colonial hegemony. Cawnpore, as Kanpur then was, became, with the capital of the province, Lucknow, a centre of this conflict.

I must add that the move to rename Havelock Road may have appealed to the granthis because the suggestion is that the road be renamed Guru Nanak Road. So, what one is enthusiastically for may excuse the error of being what you are mistakenly against.

The call for demolishing the statue of Robert Clive is perhaps more contentious. He was undoubtedly a rogue and made his fortune through realising that the East India Company couldn’t sell British woollies to India and the only way to make money was to rent out their army as mercenaries to different Indian claimants to the various thrones.

He deployed British troops to fight and defeat Siraj, but he did it to champion Mir Jaffar, who was very much a Bengali himself. And so with Warren Hastings who looted the Begums of Oudh. But where did the princelings and therefore the Begums get their wealth? Didn’t they loot it from their citizens and were they on their best behaviour with their Hindu subjects?

And for that matter were the sanctimonious upper castes of India great humanitarian benefactors of the castes now known as “scheduled” from the Appendices of the Indian democratic constitution — or as Dalits?

And now that Aurangzeb Road in New Delhi has been renamed, what of the road next to it named after Man Singh, a prominent Mughal general who did a lot of their dirty work?

Gentle reader, I won’t leave you with just that question, but with another one closer to my heart.

Somewhere in the world, in some Macedonian city perhaps, there must be statues of that SOB, Alexander the Vandal, who committed genocide against the Zoroastrian population of Persia, demolished its cities and monuments, as savages often do, and is commemorated by the idiots and apologists of this world. Zoroastrian Lives Matter! Alexander must go!