The Indian polity has changed in a great many ways, and dalits can’t be used as political pawns any longer. 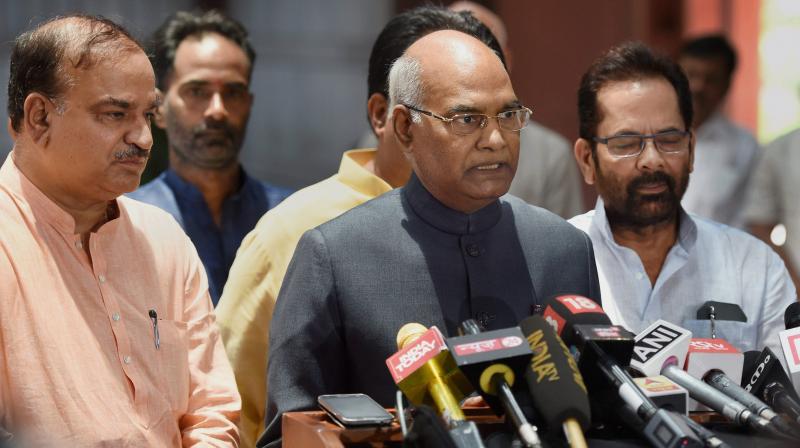 The BJP central parliamentary board’s choice of Ram Nath Kovind as the nominee of the party and of the National Democratic Alliance for the presidential election next month, and the rump Opposition choosing the Congress’ Meira Kumar as its candidate to counter Mr Kovind, is seen for what it is — a battle of symbolism at many levels. It is obvious that the two main political formations decided to field dalit candidates as they believe the office of the President of India is not politically crucial, and that they can afford to appear to be liberal and inclusive and generous in choosing a member from the most oppressed segment of Indian society.

There is a temptation to dismiss this as mere tokenism, but that would be inaccurate. The Indian polity has changed in a great many ways, and dalits can’t be used as political pawns any longer. Dalits, thanks to Bhim Rao Ambedkar, and in the last quarter-century Kanshi Ram and Mayawati, have become the bishops, knights and rooks on the Indian chessboard. They have become strategically important. Dalits now have a rightful place in the Indian polity despite the persisting discrimination and oppression.

It’s not hard to guess that neither the BJP nor the Congress will ever choose a dalit as Prime Minister of India, at least not yet. But these parties and the others recognise that dalits are important in the electoral arithmetic and they cannot be ignored, and that they need to be offered something substantial. The President’s office seems to be substantial enough, without giving away the key post of Prime Minister. Congress-baiters are sure to argue that the choice of both P.V. Narasimha Rao in 1991 and Manmohan Singh in 2004 was based on the perception that they were politically weak and that the need of the hour from the Congress’ point of view was a weak Prime Minister. But Rao did not follow the script and Dr Singh held his own contrary to perceptions and insinuations.

And it has to be said in favour of the BJP that it chose the strongest person they could find at the time — Atal Behari Vajpayee in 1996 and Narendra Modi in 2014. It means there is a possibility that the BJP could choose a dalit Prime Minister if someone with the energy and ambition and flair of a Vajpayee or a Modi were to emerge, and who was able to carry the other sections with him or her.

Ambedkarites are sure to ask was not Ambedkar the man who could have carried the others with him? The harsh fact is no, he could not have and no one saw it more clearly than Dr Ambedkar himself. The Catch-22 situation for the dalit leader is this: Once you identify yourself as a dalit leader, you lose out on the support of others, and if you take the position of an unaffiliated leader — like Jawaharlal Nehru, and to a great extent Indira Gandhi — you will lose out on the support of the core group.

There is little doubt that Indian democracy will throw up a dalit leader who will not be identified only as a leader of dalits. We must remember that Barack Obama would not have become President of the United States if he was seen only as a black leader.

For now, dalit leaders must settle for the second-best post in the political arena: that of President. The apparently tangential and hypothetical question needs to be asked: would the Congress leaders in the 1950s have chosen Ambedkar for President? The answer is a clear no. There are two reasons for this. The competition was immense, and there is little doubt that Ambedkar ranked high among his peers though they strongly disagreed with his unambiguous political stances. Rajendra Prasad was not really a backbencher who was pushed into the front row to be President. Again, to be fair to Nehru, he wanted C. Rajagopalachari to be the first President, and Rajagopalachari was no second-ranking leader by any stretch of the imagination. Second, Ambedkar was not a member of the Congress, despite the many efforts the party makes to appropriate him, though again only symbolically and not substantially. Ambedkar, Prasad and Rajagopalachari would have made for a great contest.

By 1957, Nehru preferred S. Radhakrishnan as President, but Prasad held his own because he had strong backing in the generally conservative Congress. Nehru, the liberal and socialist, was in a minority in his own party, a fact that is often overlooked by historians as well as political commentators. But Nehru seemed to have felt that the President’s office should not become another political centre. He wanted it to remain a ceremonial, constitutional office, without much pomp and much less power. Radhakrishnan was seen as an eminent, non-political person.

The BJP, then, has chosen a weak political leader, Ram Nath Kovind, to be President, and the Congress has reciprocated, by zeroing in on the second-ranking Meira Kumar. The two parties share the view that the President shouldn’t be a force to reckon with politically. It will be argued that in a parliamentary democracy, there’s no room for a politically assertive President. It seems to make sense, but it’s not true. The Constitution has vested the President with enormous discretionary powers, and political parties are aware it’s not safe to trust the powerful office with a powerful leader. Thus everyone talks of how the President of India is the symbol of the republic, which is inane and platitudinous talk.