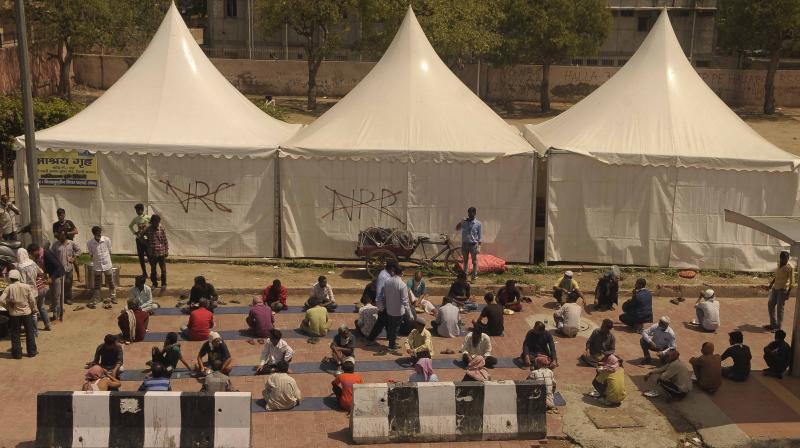 People living in the streets sit down to receive food at a soup kitchen set up at a temporary shelter in the Nizamuddin area of New Delhi. (DC Photo: Pritam Bandyopadhyay)

The Covid-19 pandemic has exposed the uncertainties of major world economies, but in India it has laid bare many of our pretensions. The reality is sinking in slowly as hundreds of thousands of Indians have been forced, in the absence of governmental support, to make do with short-term charity from private individuals and voluntary agencies to stave off hunger in the past 30-plus days.

The central government has proved itself unwilling (and is quite possibly also incapable) to extend them succor even in an hour such as this. On the ground -- in the districts and in the villages -- it is the state governments that must deal with the unprecedented situation. And they are struggling.

The state of their finances is far from satisfactory. It’s been made worse by the central government's unexplained delay in paying the Rs 32,000 crore owed to them as GST backlog, and that’s just one of the issues on the table. If things turn out poorly, it is the states that will be made the fall guy, politically speaking, while the good and the great at the Centre will probably busy themselves with theatrics.

Such is the state of affairs in the world’s ninth largest economy in nominal GDP terms, and the fifth largest in terms of purchasing power parity, a notional landmark reached last year when India pushed ahead of Britain and France.

In recent years, official propaganda has sought to play up these facts to give ordinary Indians a sense of achievement, and to buoy them with the false feeling that while they may be a developing country they have also “arrived” and may now be counted alongside those in the big league whose wealth we had so far envied from afar.

The contrived gratification took a beating when thousands upon thousands of the poorest Indians and their families fled India’s big cities on foot for destinations hundreds of kilometres away. They aimed to head back to their villages (in Rajasthan, Uttar Pradesh, Bihar, Chhattisgarh, Jharkhand, Madhya Pradesh) from New Delhi, Mumbai, Surat, Ahmedabad, and many places in Kerala and Karnataka.

These were daily income earners. When the lockdown came, they knew they didn’t stand a chance in the big city (to which they had fled from their impoverished village homes to eke out a living). Dick Whittington was not wanted in London anymore!

For our poorest citizens, life is lived at the most basic level. If they don’t have earnings at the end of the day, they are forced to starve. And when the exodus began, it was clear to them that they didn’t have money for rent either. They were better off on the road, marching in the hot sun, than in staying back in the city. Not since the Partition of India over 70 years ago have such images of mass migration been seen. At least then there may have been hope in some bosoms; now there was only trepidation.

No tabulation is yet available of how many people ran away from the cities and headed home on hearing prime minister Narendra Modi’s flash announcement of a national lockdown. But it is reasonable to assume that they were from the vast pool variously referred to (with small definitional differences) as informal sector workers, migrant labourers, or casual (non-agriculture sector) workers. According to an ILO estimate of 2011-12, of the total labour force in India of 495 million, the overwhelming bulk (90.7 per cent) is from this category. Ten years on, as a rule of thumb, it seems plausible that around 500 million Indians live day-to-day, which means that they pretty much go hungry on days they cannot earn.

If this means that close to half the population (taken to be around 1.3 billion) is on the brink of anytime starvation, then it is an indictment. It is also an index of the serious structural infirmity of India’s economy, no matter how much we have begun to praise its presumed strengths.

Whatever our finance ministers since Manmohan Singh may have said to shore up morale, and to assure foreign investors that budget deficits will be tightly managed so that the country remains in investment grade, “the fundamentals” of our economy cannot be considered “sound” if there are serious structural limitations. India’s GDP per capita (the share of GDP notionally available to each individual) gives the game away. It mocks the self-adulation summoned by citing total GDP figures or pointing to the economy in terms of purchasing power parity.

World Bank data for 2018 suggests that India ranks a lowly 139th in the world in terms of GDP per capita, which stood at a measly $2,010. In contrast, China was around $9,000, Indonesia $3,900 (to say nothing of the major Western economies, many of which rank behind India in PPP or total GDP terms). For perspective, the India-China gap (one is to 4.5 approximately) is similar to the India-Afghanistan gap since the latter’s GDP per capita stood at a meager $500 in 2018.

While many of India’s poorest left for their village homes on hearing the PM’s instruction for an immediate lockdown, a very large number (again, no data exists) stayed behind because the government, having now turned wise, blocked them from leaving. In very large measure, these poorer than poor people have been sustained for the past month or so mostly through personal donations from thousands of good samaritans and the heroic voluntary efforts of many.

Having been associated with this effort in a trifling way for a while, this writer can attest from personal experience that a week’s pack of the most basic foodstuffs for a week for a family of six or seven persons can cost anywhere between Rs 750 to around Rs 940. (And we speak of zero cash transfers.) That’s the scale of the most basic effort the Centre ought to have made. What it did, instead, was to transfer a total of Rs 500 to every Jan Dhan account when the storm broke. How does this look for the world’s fifth largest economy in PPP terms?