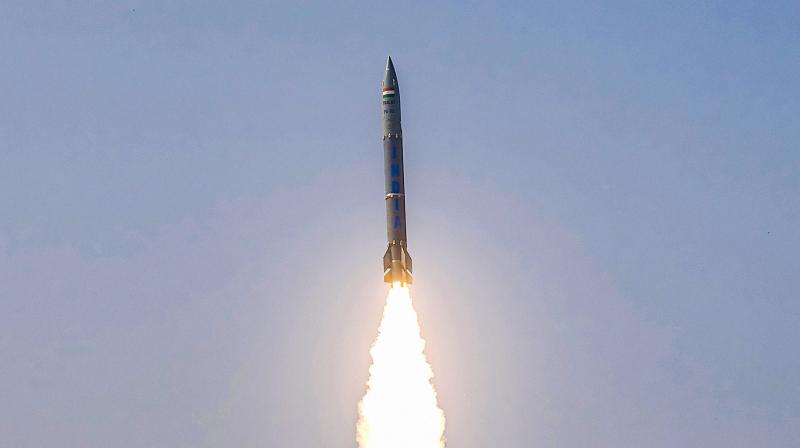 The Pakistani officials further accused India of endangering both international and domestic air craft that ostensibly were in close vicinity of the missile. (Representational Image/ PTI)

On March 10, 2022, the director-general of Pakistan’s Inter Service Public Relations (DGISPR) Major General Babar Iftikhar and Air Vice Marshall Tariq Zia held a rather unusual Press conference. In that briefing they said that on March 9 at 1843 hrs a high speed flying object originating from somewhere around Sirsa in India and travelling at a height of close to 40,000 feet and at an estimated speed of 2.5-3.0 Mach (thrice the speed of sound) crossed the international border between India and Pakistan landing 124 kilometres inside Pakistani territory at a place called Mian Channu.

The object in all probability a supersonic missile was in Pakistani airspace for three minutes and forty four seconds before fading away, i.e., hitting the ground.

The total travel time of the missile was six minutes and forty six seconds out of which it spent approximately three minutes and two seconds in Indian airspace.
The Pakistani officials further accused India of endangering both international and domestic air craft that ostensibly were in close vicinity of the missile.

Almost a week later on March 15, 2022, defence minister Rajnath Singh acknowledged in Parliament, “I’d like to tell this House about an incident that occurred on March 9, 2022. It’s related to an accidental missile release during the inspection. During routine maintenance and inspection of the missile unit, around 7 pm, one missile got accidentally released. While this incident is regretted, we are relieved that nobody was hurt due to the accident.”

He further went on to add and reassure the house that “[I can assure the House that] the missile system is very reliable and safe. Moreover, our safety procedures and protocols are of the highest order and are reviewed from time to time. Our Armed Forces are well-trained and disciplined and are well-experienced in handling such systems.”

Earlier, on March 11, 2022, the ministry of defence in a statement had stated that “in a statement, the MoD said, ‘On March 9, 2022, in the course of a routine maintenance, a technical malfunction led to the accidental firing of a missile. The Government of India has taken a serious view and ordered a high-level court of inquiry. It is learnt that the missile landed in an area of Pakistan. While the incident is deeply regrettable, it is also a matter of relief that there has been no loss of life due to the accident.’”

Writing on the online platform, The Wire, Rahul Bedi picked up the discrepancy in the two statements and opined that “They said that while Singh’s account essentially duplicated what his ministry said two days after the March 9 incident, it ‘revealingly’ differed in one respect which could provide a clue to what led to the projectile’s chance launch into Pakistan. In his statement, the defence minister omitted any reference to the ‘technical malfunction’ of the missile in the course of ‘routine maintenance’, which his ministry claimed had led to the missile’s inadvertent liftoff.”

Instead, Singh specifically told the Lok Sabha on March 15 that the Indian military’s standard operating procedures (SOPs) with regard to missile handling, though unmatched and of high calibre, would be revised — if needed — following the ensuing court of inquiry (CoI) into the incident. Senior service officers and defence analysts interpreted this to indicate that the government is suggesting “human error” — and not some technical inefficiency or shortcoming in the missile system — may well have precipitated the mishap, the first ever of its kind between two nuclear weapon states (NWS).

He further added “industry officials also pointed out that the authorities were 'commercially conscious’ of the fact that any hint of a ‘technical malfunction’ in the BrahMos triggering its chance flight could adversely impact the $375 million deal which Delhi signed with the Philippines in January for three of its land-attack batteries”.

“Several planes passed through the direct trajectory of the missile that day, which flew from the Indian garrison town of Ambala and ended up in Mian Channu in Eastern Pakistan. They included a Fly Dubai jet heading to Dubai from Sialkot, an Indigo plane from Srinagar to Mumbai and an Air Blue Ltd. flight from Lahore to Riyadh. All crossed the missile’s trajectory within an hour of its accidental launch, data from flight-tracking application Flight radar24 show. Other international flights in the vicinity of the missile’s trajectory — and within its range — included a Kuwait Airways Co. jet heading to Guangzhou from Kuwait City, a Saudi Arabian Airlines flight to Riyadh from New Delhi, and a Qatar Airways service from Kathmandu to Doha, the data show. No advisory to pilots operating in the vicinity — known as a notice to airmen or NOTAM — was issued. A time-lapse video of the airspace — prepared by Flight radar24 on request from Bloomberg News — showed busy activity in the skies within an hour-and-half of both sides of pm local time on March 9, which India said was the approximate time of the accidental launch.”

Thirty years ago, on September 26, 1983, the world was saved from probable nuclear misadventure. At the threshold of morning Soviet Union's early-warning systems identified an incoming missile strike from the United States. Computer readouts indicated several missiles had been launched. Standard Operating Procedure for the Soviet military would have been to respond with a nuclear attack of its own. The officer on duty Stanislav Petrov — whose job it was to catalog ostensible enemy missile launches took a considered call not to report them to his superiors dismissing the flashing screens as a false alarm. Petrov’s judgement probably averted a third world war that day.

Had the Pakistanis reacted to the missile launch with a retaliatory strike of their own it would have been game and match over in three to seven minutes — that is the missile flying time between India and Pakistan. Both countries could have been nuclear toast.

Given the various ominous implications of this missile launch whether due to a technical malfunction or during routine maintenance and inspection it presents a very strong case for an institutionalised dialogue between India-Pakistan on nuclear issues and a regular exchange of strategic force commanders.