India is becoming an intolerant nation

The police did precious little to prevent the violence of ABVP members. 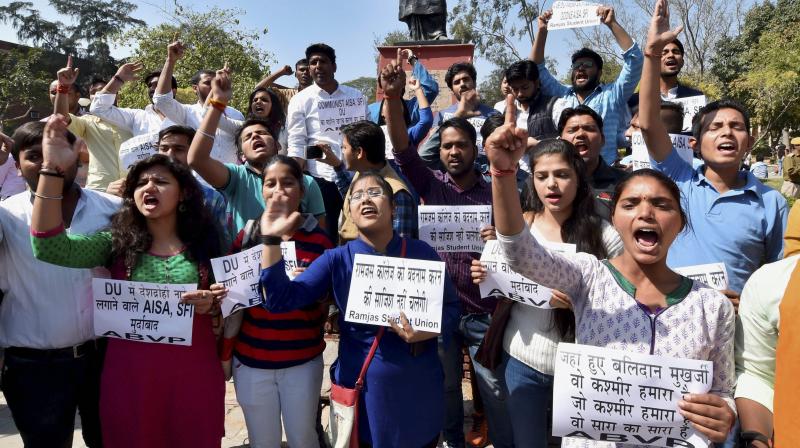 ABVP activists shout slogans as they hold a protest against AISA at DU campus in New Delhi. (Photo: AP)

I can understand that some people in our country don’t agree with Umar Khalid. I can also accept that, according to some people, the views he holds are anti-national. But, what I cannot understand is that because such people disagree with him they will not allow him to speak. Nor can I accept that the definition of being patriotic can be held hostage to some people’s notion of what nationalism should be.

The RSS did not participate in the freedom movement. It was a conscious choice its leaders made on the basis of ideological differences with Gandhiji and the Congress leadership in the freedom struggle. In fact, the British gave the RSS a certificate for “good” behaviour. But, even though I disagree with the decision the RSS made then, and have deep reservations even today on some aspects of its ideology, I will not consider them anti-national. Their views must be fought politically, including through discussion and debate and argumentation, and in the arena of democratic discourse. For all my differences with the RSS, I will not say that it should be denied a public platform, or be dubbed seditious. It is for the same reason that I condemned the attempt by the JNU students association to prevent Baba Ramdev, or other speakers of the same ideological hue, including from the RSS, to speak in JNU.

Within the political spectrum, differences between the left and the right have existed ever since 1947. Liberals have questioned the fundamentalisms of the right, and the rightists have condemned the accommodative — and sometimes expedient — flexibilities of the liberals. But it is precisely the nature of a democratic State to allow both views to find expression. Article 19(a) of our Constitution guarantees freedom of speech and expression, with such “reasonable” restrictions “in the interests of the sovereignty and integrity of India, the security of the State, friendly relations with foreign states, public order, decency or morality, or in relation to contempt of court, defamation or incitement to an offence”. The prerogative to decide what is an infringement of the fundamental right to freedom of speech and expression lies with the judiciary. Mr Khalid has not yet been convicted under the law. His matter is sub-judice, and he is out on bail. But, when he was invited to speak at Ramjas College last week, on a subject entirely different to the controversy in JNU, the goons of BJP’s student wing, the Akhil Bharatiya Vidyarthi Parishad (ABVP), decided that they were prosecutor, judge and jury, and declared that since Mr Khalid, in their view, is anti-national he will not be allowed to speak, and that if this firman is not adhered they will violently enforce it.

The tragedy is that they succeeded. Ramjas College withdrew its invitation. The police did precious little to prevent the violence of ABVP members. In fact, it colluded with them, and beat up not only those students who opposed the ABVP but also the media. It is reported that some policemen hid their identifications in order to reinforce the hooliganism of the ABVP. The impunity with which the ABVP broke the law is directly linked to the fact that as the youth wing of the ruling BJP government at the Centre it believes that it has immunity from the law. And, although three policemen have been suspended, the truth is that, in general, the police is influenced by its own loyalties — not to the Constitution of India, but the political masters whom it serves. The net result was that Mr Khalid could not speak, and nor could his colleague from JNU, Shehla Rashid Shora. The undemocratic, illegal and condemnable tactics of threat and intimidation worked. Now, we hear reports that Khalsa College in Delhi University has also cancelled its street theatre festival because of repeated threats from the ABVP over the “anti-national” content of some of these plays.

The danger is that every time such acts of vandalism, violence and intimidation in the name of nationalism succeed they set a precedent that reinforces the possibility of their recurrence in the future. If the culprits are not punished — and those who are supposed to enforce the rule of law collude with them — they are likely to act in the same lawless manner with even greater impunity the next time round. In a concrete sense, we saw this demonstrated at Ramjas. The hooligans who beat up journalists and those opposed to their views when Kanhaiya Kumar was to be produced before the court at Patiala House in New Delhi — and remained both unpunished and unrepentant — are the role models for those who took the law into their own hands at Ramjas College a few months later.

In this increasingly brittle milieu, what is being forgotten is that our civilisation had never shown such aversion to dialogue and debate. On the contrary, we can with some pride claim that, in many respects, the foundation of our civilisational ethos was dialogic. Lord Buddha, who founded Buddhism, repudiated the Vedas, which most Hindus considered to be revealed text. Jainism did the same. Even within Hinduism, the Carvaka school of materialism went so far as to say that the Vedas are nothing but a compilation of untruths. But, the response of those who opposed them was not to beat them up, or to say that their voice cannot be heard. Their response was to resort to vigorous debate and intellectual refutation, wherein the critique of their opponents was clinically analysed and refuted on the basis of reasoning and discussion.

Democracy is not only about the number of elections we hold. Democracy is about fostering the democratic temper, where people are free to disagree, and can debate the reasons why. Unfortunately, a new kind of Indian is being provided all the encouragement to proliferate. This Indian believes that only what I say is right, and all those who disagree with me must be shut up or beaten up in the name of a new kind of insular anti-nationalism. This is certainly not what the Constitution guaranteed to the Indian Republic.