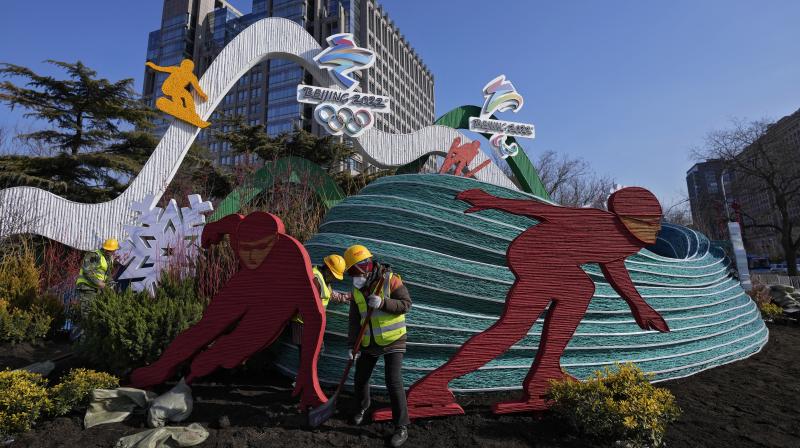 Workers wearing face masks to help protect from the coronavirus set up a decoration for the Winter Olympic Games in Beijing, Sunday, Jan. 16, 2022. (AP)

It strains reason to think that the Communist Party of China has crippled the entire planet with its bioweapon, is committing genocide in Xinjiang, threatening war with Taiwan and India, but on February 4, it will be hosting the world’s biggest party — the 2022 Winter Olympic Games in Beijing. And the mighty Western corporate sponsors are all on board.

Chamath Palihapitiya, a Woke social justice billionaire, former Facebook executive and major US Democratic Party donor who gave $1 million to Joe Biden, part owner of an NBA sports franchise, made global headlines with appalling remarks on his podcast entitled “All In”, saying: “Let’s be honest; nobody cares about the Uyghur genocide, okay? I’m just telling you a very hard ugly truth.” He then dismissed human rights as a “luxury value”, trashed the United States and said that China wasn’t a dictatorship. Chamath, a Sri Lankan immigrant who escaped a bloody civil war and prospered in America, is refreshingly honest saying what his billionaire partners really feel: Give China an easy pass, the Uyghur prisoners provide cheap slave labour for Western brands, who are the biggest sponsors of the 2022 Beijing Winter Games.

The Chinese were awarded the 2008 Summer Olympic Games with the promise of “improved human rights”. The Tibetan protests disrupted the CPC’s global Olympic torch relay, shamed the Chinese Communists, and Tibet paid a fearful price. At a media conference in Honolulu held shortly after the Games, the CPC claimed that Beijing 2008 was a great success. “Those troublesome Tibetans will be dealt with because we got a massive technology transfer from Western security firms to ensure a ‘terror free’ Olympics”, it indicated. The CCP was quick to deploy that high tech gear to expand their concentration camps in Tibet and Xinjiang and to impose digital monitoring of its 1.5 billion subjects. The International Olympic Committee and Western corporations gave the CPC’s totalitarian dictatorship a victory as stunning as Hitler’s at the 1936 Berlin Games.

WION’s Palki Sharma noted: “The Games are how the IOC helps the CPC sports-wash its crimes.”

And where are the Woke athletes, who bend the knee for racism, but not for genocide? NBA stars Enes Kanter Freedom and Royce White have called out the crimes of the CPC, true, but they are lone voices. The IOC’s Rule 50 forbids political gestures or demonstrations. This rule was routinely flouted at the 2021 Tokyo Games by leftist American athletes protesting against their homeland, and who faced no penalty. The CPC has already warned that Olympians who “violate the Olympic spirit or Chinese laws” will be punished by the Chinese authorities. I suspect that elite American athletes and their virtue-signalling corporate sponsors wouldn’t last five minutes in a CPC prison, where the Party has absolute power to torture and detain anyone deemed to be a “threat to national security”.

The CPC will enforce strict surveillance and medical tests for all Olympians. US Senator Tom Cotton has warned: “Thousands of world class athletes will gather to compete in China. Their DNA will present an irresistible target for the CPC.

They will attempt to collet genetic samples disguised as testing for drugs or Covid-19.” The athletes are advised to only use burner phones while they are in Beijing for their own security. Will the athletes buckle, or will their encounter with the CPC’s vicious police state summon courage? Or a revelation that life in a democracy, with free speech and the rule of law, isn’t so monstrous after all?

NBC paid $8 billion for broadcast rights and is airing cheerful promos about China’s “Covid Success” as the Games approach. They are not reporting that huge cities in China are under strict lockdowns. Just recently in Xi’an, a city of 13 million people, starving citizens who went outside for food were beaten by the police. Large parts of Beijing are under lockdown. Plus, there’s a problem with the snow, as photos from Beijing show fleets of machines pouring artificial ice on the ski slopes, whilst the adjacent mountainsides are bare.

The backstory of Xi Jinping’s Olympic gambit is the duel between the rival factions of the CPC: Xi’s White Hands vs Jiang Zemin’s Black Hands. Both cabals are comprised of evil men, guilty of foul deeds. In 1999, Jiang launched the persecution of millions of Falun Gong practitioners as “evil cultists” who threatened the CPC’s “modern socialist culture”. Xi launched the Uyghur genocide and crushed Hong Kong, while both continued the slaughter of Tibetans and the plunder of Tibet’s land and water. Xi’s plan to seal his status as Mao Zedong’s heir at December’s party congress is now imperilled by his catastrophic plague, his failed “Zero Covid” lockdown strategy, and a property debt crisis spreading like a virus. Cryptic posts in the Chinese social media say that “Xi is bad for business” and that Jiang’s Black Hands, the Shanghai Gang, headed by the 95-year-old strongman and run by his sons and grandsons, is prepared to strike.

Xi and his corporate allies are struggling to present Beijing as a glorious Potemkin village for the two weeks of the Winter Games as his nation and the world reels under his calamitous misrule. It’s Xi’s Olympics, and he will just have to win gold. Let the War Games begin.