A robust paradigm for real diversity

JLF this year has also been witness to the rise of the new bilingual Indian writer in the persons of Upadhyay, Kunal Basu and Aaruni Kashyap. 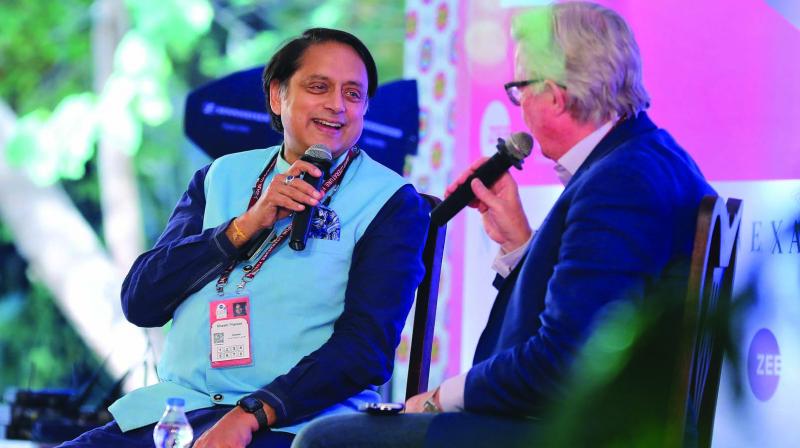 Women participating in the nationwide anti-Citizenship (Amendment) Act protests rightly took offence when Kanhaiya Kumar took recourse to a familiar Hindi metaphor involving bangles during a recent debate. However, their rush to reclaim the ornament as a symbol of female power rather than compromise was facetious and, at best, an argument for vulnerability. A certain kind of butch aesthetic is also erased when we make bangles a symbol of our resistance.

But how much make up is too much make up and what indeed is too little? Young women in the corporate space have consistently faced elitist bias for not dressing the part, which also includes adopting the femme aesthetic of wearing ornaments. When they don’t, they are suspected of being social climbers, misjudged for having ostensibly been unable to absorb the manners of the class to which they purportedly aspire to belong.

It is the same judgement faced by women who do not necessarily assert but simply decline to lose their cultural identity in the public space, a realisation brought to fore with the La illaha illallaha debate sparked off by a tweet from none other than the redoubtable Shashi Tharoor. While his tweet might well have been a warning against fundamentalism, Mr Tharoor has nevertheless opened up a Pandora’s box of questions.

At the ongoing Jaipur Literature Festival, bilingual writer, Anukriti Upadhyay, said, “Due to our colonial past, there is a perception of class associated with the use of English which often leads one to abandon one’s native language.”

Forrest Gander, American geologist-poet and 2019 Pulitzer awardee attending the fest, who is one of the pioneers of international regionalism, has described in his works how geography shapes the sensibility and personality of a race, and with its ecological and linguistic multiplicity, India is a country where religion is hardly the only marker of identity. Identity is real and, at the bottom of it, a cultural question.

At the festival on Friday, Mr Tharoor felt it important for his audience to know how the sense of history of the present government differs from the southern Indian’s sense of history. “Contrary to its perception, for instance, Islam came peacefully in our state in the lifetime of the Prophet through the hands of traders who had been operating for thousands of years,” he said. The same dissonance is at play when it comes to mythology. Mr Tharoor went on to regale his listeners with the legend of Onam — a battle of wits between Vamana and the egalitarian king, Mahabali, which the latter lost, honourably — and then cited the home minister’s infamous tweet on the eve of Onam — “Happy Vamana Jayanti”.

But the cultural is also political, and more so in the present times. This came through when Mr Tharoor, who is against the government’s directive to the finance commission to move away from the 1971 Census to the 2011 Census, said: “And soon, we will have the 2021 Census in which some southern states will actually lose population. The result is that about 40 Lok Sabha seats from the south will disappear and be reborn in the north, and you can imagine what political consequence that’s going to have. There is the real danger of your voice not being heard in the government because now there are too few of you to be heard.”

JLF this year has also been witness to the rise of the new bilingual Indian writer in the persons of Upadhyay, Kunal Basu and Aaruni Kashyap. Asked how he decides what language to write a story in, Kashyap said, “It is the story that actually chooses the language.” Does he see himself as an Indo-Anglian, an Assamese or an Indian? “I see myself as an Assamese just the way a Bengali and a Tamilian sees themselves as a Bengali and a Tamilian. I see the world primarily through an Assamese lens. That said, we are not one thing, right? We are so much richer than any one identity.”

Kashyap agrees that if one is a sub-national in the best sense, one is automatically an Indian. Yet it is this subnational identity that has so far been suppressed in favour of promoting an artificially syncretic Indian identity. It is artificial because it is actually realised in its absence — in the missing of its critical components.

Perhaps, this is why despite having 22 official languages, India, which should offer unique language learning opportunities, has surprisingly few options available to its residents — its Central Institute of Indian Languages is located in Mysuru, not Delhi, and has only a few branches, each of which teaches a select few languages.

Still, “it is the multiplicity of languages available to us that is one of the gifts of being Indian,” Kunal Basu says. He avers that English is as much an Indian language as any other tongue. Basu traces his intellectual roots to the 19th century Young Bengal movement which eschewed any form of bigotry, communal hubris or provincial exceptionalism.

“Don’t be too hard on the Indian experiment,” Basu tells this writer. “While it has failed in many respects, it has also worked in so many others, sometimes defying expectation. What I am worried about these days is that what is still holding us together will now be dismantled and this is finally going to fall apart.”

Still, the questions remain. Are various regional, bilingual writers coming to the fore today not only because of their undeniable talent but also as a form of response to the increased visibility of a new and confident, if imperfect, Hindi-Hindu identity? And will the evolution of a robust paradigm for defining Indianness and greater federalism be ultimately the unwitting gifts of this government?