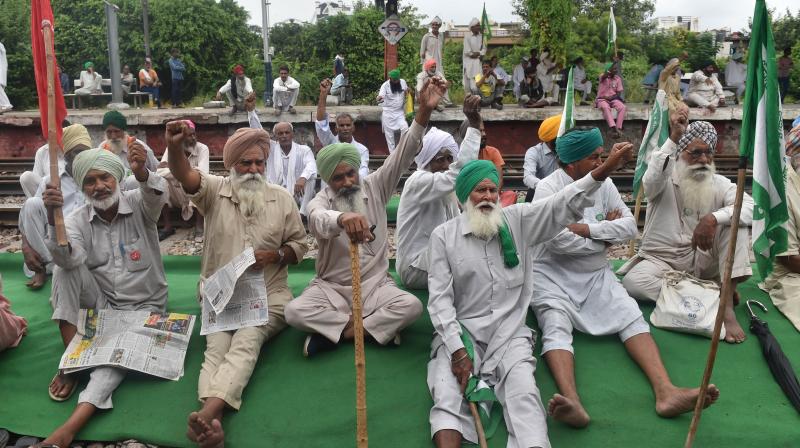 The farmers are hard-nosed realists and they are not sentimental romantic fools like their urban supporters and urban opponents. Representational Image. (PTI)

The general impression gaining ground is that Prime Minister Narendra Modi’s announcement on November 19, which also marked Gurupurab, or Guru Nanak’s birth anniversary, to repeal the three controversial agricultural reform laws that were brought in last year was a generous political gesture and that the protesting farmers should now respond to it in kind. The farmers’ refusal to be won over with the laws’ repeal, and the demand that the Minimum Support Price (MSP) should be placed on the statute book, is seen as partisan and therefore not good politics. Most of the so-called “experts” believe that the farm laws loosening the hold of the government-controlled grain markets was a necessary reform. The Prime Minister also did not say that the laws enacted by his government had been wrongly conceived. He argued that he and his government had only failed to convince the protesting farmers about the “good” laws.

The farmers who are now demanding a law which assures MSP are not taking advantage of Mr Modi’s goodwill gesture. They are acting with alacrity. Despite the assurances from everyone in the Narendra Modi government that the MSP would remain despite the laws that were brought in, the farmers have seen through the rhetorical smokescreen of the government. They have realised that in the long run the MSP would be made irrelevant because the intention was to create a market dynamic where the prices would be higher, and farmers would not need the floor price assured by the MSP. In this game of strategic thinking, the farmers have shown that they have anticipated such future developments and are guarding themselves against it. They want to make the MSP a legal requirement. The farmers’ demand then is a rational one. They are not peevish. It is the government that has been less than honest. It has sought to lead the farmers up the garden path and leave them to tackle the open market on their own.

Many of the experts who had supported the laws argued that they would benefit the farmers and that they are misled by the Opposition parties in rejecting the laws. The government too tried to defame the protesters by invoking the ghost of “Khalistan”. The entire Khalistan issue has been simmering in the background for several other reasons, but it was short-sighted of the government to delegitimise the protests by pointing a finger at the so-called “Khalistanis”. It was not just bad politics. It was a dangerous game to alienate and antagonise an important section of society. It was an attempt communalise the protests of the Punjab farmers, who are all Sikhs. But when the Jat farmers from Haryana and western Uttar Pradesh joined forces, it became difficult to sustain the “Khalistani” charge.

Prime Minister Modi did not emerge as a democratic leader who sensed the mood of the people and yielded to their demand. He exposed himself as a tactician who made the move because state Assembly elections in Punjab and Uttar Pradesh are around the corner. That is why neither the Prime Minister nor anyone else in the government have spoken so far about the “alternate farm policy” that will bring market benefits and the farmers will embrace them wholeheartedly. Their eyes are glued towards the elections. Even the agricultural experts, including those appointed to the committee by the Supreme Court, did not have the courage and honesty to explain that the intent behind the laws was to remove the State from the farm scene because that is the logical premise of economic reforms. All that the experts chanted unthinkingly in a chorus was that farm reforms are necessary if India is to move into the high growth orbit. Those who opposed the laws did not have intelligent arguments or meaningful alternatives. The opponents were discredited socialists in disguise, and they wanted agriculture to remain under State tutelage. They were less than honest because they did not declare their intent.

Agriculture as we have known it for the last 10,000 years has to change because of the looming climate crisis. There is a dire need for long-term thinking and not so much of a utopian vision which the experts and politicians want to implement. The farmers are hard-nosed realists. They are not sentimental romantic fools like their urban supporters and urban opponents. So, the farmers will change their practices without being prodded by the laws to do so. Policies and advisories can prod them. It will be a long-drawn affair.

Changes on the field cannot be introduced in the manner of bills brought before legislatures with all the clauses and sub-clauses written in black and white. And it will be necessary for the State to move out because the state institutions know only to bring about total change and nothing else. The agricultural scientists and farmers must come into closer contact and look for ways and means to move forward. The bureaucrats must be kept out from this process. There will be those who will argue that there is no time for long-term changes, and that change must happen here and now.

Prime Minister Narendra Modi aspires to be a visionary leader and he mistakenly believes, as all aspiring visionary leaders do, that the changes have to be guided from the top so the leader can claim the credit. But in the real world, as well as inside scientific laboratories, things move through too many hits and misses, of what is known as trial and error. This also tends to take a long time. Elected governments with a five-year term or governments winning consecutive elections for two or three or even four times cannot bring about permanent changes in the economy and society. All the industrial revolutions, from the first to the fourth, have happened outside the sphere of the State. Farmers can’t be treated as subjects and diktats cannot be issued asking them to change. They must become part of the climate change dialogue. Agriculture is a key factor in climate change. Unfortunately, even the climate activists and warriors have acquired the bad habits of the State. They want to dictate what everyone needs to do. The challenge before Narendra Modi is both a simple and a hard one. It is to take the farmers along and make them real partners.