With no signs of abatement, most of us are now resigned to a bleak future with dark clouds on the horizon 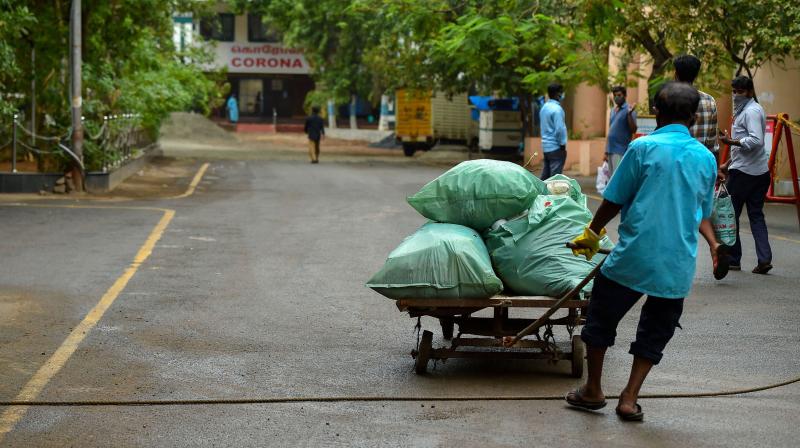 One stoically reads about the saddest tales of grit, survival, defeat and loss during these terrible times of unprecedented suffering across the world. PTI Photo

Our state of mind has reached the point where anything and everything goes. Call it some kind of collective “numbing down”, along with “dumbing down”. We have virtually stopped reacting to stories that six months ago would have rattled us.

Today, those are met with a philosophical shrug and a wry twist of the mouth. “C’est la vie”, we sigh and plod on, one listless day leading into another, with a bizarre suspension of time and place.

One stoically reads about the saddest tales of grit, survival, defeat and loss during these terrible times of unprecedented suffering across the world. And then, the tendency is to blank out all the details.

Despite these self-preservation strategies, a story that broke my heart all over again involved a report which talked about the desperation of young women  confronted with a grim future selling the one asset that is still under their sole control — their eggs. Yes, you read that right.

The going rate for eggs is Rs 50,000 —which is enough to feed a family for a few months. There are other women who are willing to hire out their wombs and take on the role of surrogate mothers for a lakh of rupees. This arrangement comes with a bonus — the package includes food, medical care and a place to stay, if the woman conceives.

Unlike in the past, these women are not from our poorest economic segments, but from middle class backgrounds. They say they have taken informed decisions on the selling of eggs and the hiring of wombs based on nothing more than dire need.
Their dependents are in the know and support the women as they go about finding the right doctors and agents for such “transactions”.

The viciousness of the pandemic has hit women in more ways than are accurately chronicled. Some of the egg donors have lost their regular jobs and are facing an economic crisis which is adversely impacting every aspect of their fragile lives.

In Mumbai, millions of women are rapidly rejigging their priorities to generate an income, regardless of what it takes. I felt intensely sorry for those 25-year-old to 35-year-old females who are lining up at fertility clinics to donate their eggs and offer wombs. It cannot possibly get more poignant than that.
Drastic survival measures during dismal times.
An inescapable home truth — a woman has only her body to trade as the last resort.

The other woman-centric story worth sharing is about the video that went viral this week, featuring a woman named Raisa Ansari, a vegetable vendor from Indore.

She was protesting in fluent English, on camera, about the harassment faced by her and other vendors from municipal officers who kept chasing them away, cruelly preventing them from earning their livelihood. Asked about her impressive English language skills, she claimed to be a research scholar from the Devi Ahilya University, with a PhD in Material Science. What was she doing pushing a vegetable cart?

Raisa said she had very little option, given that she was jobless and had a family of 20 to feed. “Because of my Muslim name, no college or research institute is willing to employ me,” she explained.

If it is true, her story underlines so many social ills all in one go — deprived of getting gainful employment given her education, also stigmatised because of her religion, and helpless in the face of the pandemic, Raisa’s lot is as miserable as it can get.

Women are fighting heroic battles during the coronavirus crisis, not just here in India, but all across the world.

With no signs of abatement, most of us are now resigned to a bleak future with dark clouds on the horizon.

But despite the pessimism, there are a few upbeat voices out there, like those of Mizga and Faiyaz Shaikh, a young couple from Malwani, Mumbai, who have been feeding families in their densely populated neighbourhood for the past four months.

Mizga, the principal of a small school in the area, first waived fees for three months, and then woke up to a far more serious issue — lack of food! The parents of her students barely managed to feed their families a single daily meal.

Mizga spoke to her husband, who works in a perfume factory and they launched a scheme to provide food to the needy. But now, so many months down the line, they have exhausted their savings of `4 lakhs, and bravely say: “We will continue to help people.” They had saved up to buy a home, but as Faiyaz admitted: “Allah will help us save for our home again.”

Market watchers paint a cheery picture of the economic bounceback, as they follow the listed stocks and quote Dalal Street pundits who insist that we will be celebrating Diwali with a bang as industry aggressively pushes ahead, harnessing and embracing innovations, while cutting flab.

The same flab that should have been trimmed years ago. The pay cuts, staggered payouts, heavily discounted offerings and many other such tough measures are forcing all of us to press the “pause” button and, if possible, go back to the drawing board and starting from scratch. With silver and gold prices shooting skywards, the festival season has been robbed of all enthusiasm.

Mumbai will have to make do with a severely curtailed Ganesh Utsav, while Raksha Bandhan next week will see far too many bare wrists as sisters struggle to get rakhis across to their brothers.

Most will settle for a virtual celebration — just like we will all get accustomed to all things virtual, marriages included. Though, honestly speaking — how does a young couple celebrate a virtual suhaag raat? For that matter, even a non-virtual one? What happens to social distancing when the bride and groom get between the sheets?

Readers can send feedback to www.shobhaade.blogspot.com