Farrukh Dhondy | Is ‘Islamism’ unjustified? It is, but so is ‘women’ 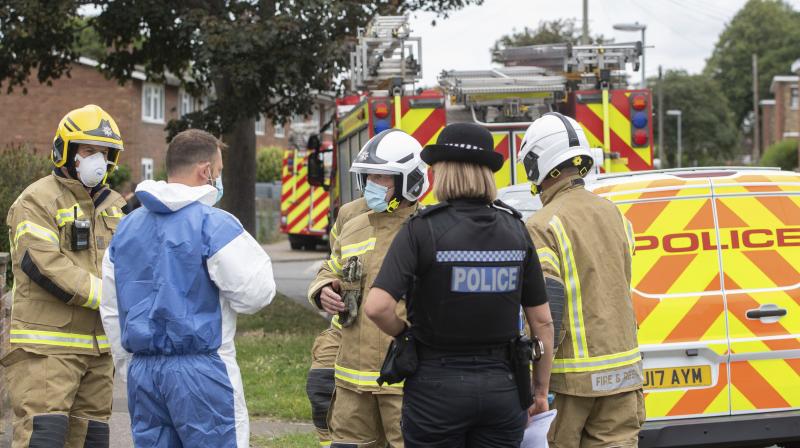 The “Islamist” attacks in India were, in all instances, politically motivated – spreading terror in the name of a neighbouring state. AFP Photo

“You worship the sun —
A mass of nuclear explosions?
Your Moon is just a lump of mud
So Bachchoo, rid yourself of notions
— there are no pictures in the sky
Only Bundles of burning gases
They don’t determine human fates
Only the fates of asses.
— From Lady Chatterjee’s Lover by Bachchoo

The UK police are contemplating dropping their descriptions of the acts of terrorists who shout slogans such as “Allah hoo Akbar” as they perpetrate them as “Islamist”. They have been urged by the Muslim Police Organisation to drop the term “jihadi” when describing these criminals.

Over the years, after any such outrage is perpetrated — as in the stabbings near London bridge, the suicide bomb attack on a concert in Manchester, the vehicle driven to kill people on Westminster bridge — the police have classified it as Islamist terror.

The objection is that the terms associate mass murder with Islam and that gives rise to Islamophobia and racism.

I must admit that I have used the terms “Islamist” and “Islamicist” myself in writing about terror incidents perpetrated by individuals who profess to be following the dictates of Islam and aim at martyrdom through mass murder.

In recent days attention has focussed on these terms as the trial of a Jamaican convert-turned-preacher from East London who calls himself Abdul Al-Faisal is accused of lecturing to 11-year-old Muslim boys that they should devote themselves to acquire Kalashnikovs to “fight for Islam” and become “Jihadis”. He is accused in court of attempting to convince children that they should die in the cause by killing infidels and that would buy them a pass to paradise.

Even last week Mohiussunnath Chowdhury, a 39-year-old who worked as a chicken-shop salesman, was jailed for 25 years for plotting attacks on potential targets that included a gay pride parade and the wax-figure museum Madame Tussauds.

This same fellow had in August 2017 slashed police officers with a sword outside Buckingham Palace, but British justice at a retrial acquitted him of a terror offence after his lawyers claimed he was depressed and wanted to be shot dead. His sentence was shortened.

Police found charts pinned to his bedroom door of his plans for when he arrived in heaven — including meeting wives and decorating his “main palace”. He said in his notes that he would keep two of the 72 “houris” in the first place with him and the other 70 would presumably be kept in reserve.

Calling this fantasist a “jihadi” or indeed an “Islamist terrorist” is an offence against all notation. The poor fellow is obviously a dangerous lunatic and should have been treated as such under British law.

When I used the term “Islamist”, gentle reader, I sincerely thought of the adjective setting the subject apart from any connotation of the word “Islamic”. I am no theologian and have no acquaintance with the eschatology of Islam but am assured by every decent scholar of Islam that nowhere in the Quran or in the Hadith is there any injunction to seek martyrdom through the random murder of innocent people.

Yes, we have seen terrorist activity in several continents, from even before 9-11, which has claimed the lives of people, some of them Muslims, going about their business with no taint of ‘infidelity’ or enmity towards Islam.

The “Islamist” attacks in India were, in all instances, politically motivated – spreading terror in the name of a neighbouring state. In Britain, America and Europe, they are acts of death-cultists who follow the ideology of Osama (Fish be upon him!) or Big Daddy Baghdadi, the founder of Daesh.

I am proud to say that in writing about these murderers I haven’t used any allusion to Islam. I referred to them as the brain-dead “death-cultists” deliberately dissociating them from Islam. Calling them mentally challenged in any legal forum would afford them, in British law, the status of not being responsible for their actions and that would give their lawyers a loophole to plead for clemency.

History makes us aware that no religions, or the followers of religions, are free from the taint of violence. The Romans and Greeks had Gods of war; Christians and Muslims fought crusades for territory; Hindus certainly used religious slogans in their wars; Zoroastrians, in the imperial eras, conquered in the name of Ahura Mazda and only very recently the Buddhists of Myanmar perpetrated genocide against the Rohingya Muslims.

In the theological urgings of most religions (with the exception of Buddhism) there can be found injunctions to spread the word of God or the particular faith to which the believer belongs. But there is no justification, I am assured, in any interpretation of Islam, for the random murder of masses of innocent people (or even a single such person) as a ticket to paradise and 72 virgins.

So there is, gentle reader, a strong argument, not in grammar but in sentiment, for dropping the word Islam from an association with such perpetrators.

Having said that, I remain sceptical about the efficacy of the change of words and spellings as effective radical action.

Some, whom I would refer to as “linguistic revolutionaries” don’t, in my humble view, further their own cause by devoting their time to outlawing words.

Changing the spelling of “women” to “wimmin” has achieved less for feminism than those who demanded and won votes for women in Britain.
Having said that, I am in no way against the purging of offensive references and nomenclature from, say, children’s literature.

That sensitivity is justified as safeguarding infant minds from racial insult.

In Britain the suggested alternative to Islamist is “faith-claimed terrorism”. It’s a clumsy phrase and even if it’s implemented in the UK, the sensitivity that brought about the change won’t spread to, say, the USA.

As far as the Indian police are concerned, I doubt if they use the phrase ‘Islamist’ at all. Their description of terrorists probably involves adjectives which refer to the terrorist’s mothers and sisters.