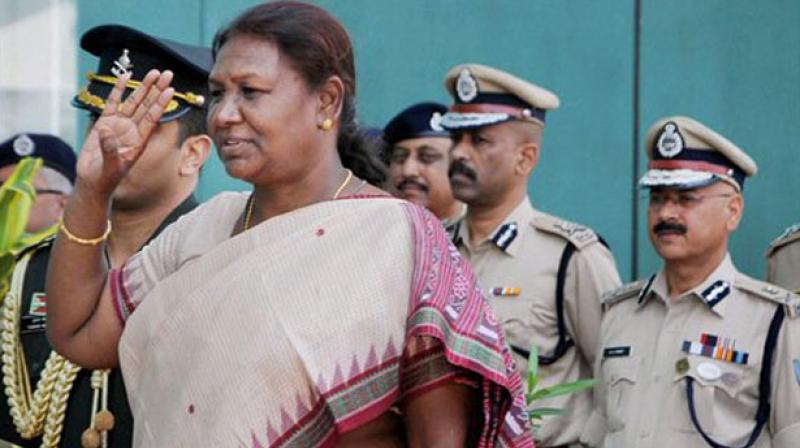 Gopalkrishna Gandhi, 77, onetime diplomat, former West Bengal governor and a grandson of the Mahatma, has sensibly said “No!” to accepting the most prestigious post in India — President of the Republic. Congratulations, Sir. Like sex, accepting a presidential nomination has to be consensual. An act between adults who are on the same page, chasing the same objective. Or else, it is not pleasurable. Sex under pressure does not always add up to rape, per se, but becoming the President of India under pressure is equally repulsive. How many public figures would have the moral courage to refuse such an honour? Well… Gopal Gandhi is one. There have been others in the past, as well. These individuals are rare. And very smart. They know what comes with the territory, and they aren’t interested. Simple. There’s no such thing as a free lunch, as the cliché goes, and there’s no such thing as being chosen for the highest office in the land without strings attached.

Our Presidents are no longer the Presidents of an earlier era — who also had their share of dirty politics to deal with back then. But the blatant and very cunning choice of a few during the past 20 years has devalued the most glorified position in India, reducing it to a rubber-stamp job, more ceremonial than worthwhile. Unless, of course, the chance to occupy a residence that is bigger and grander than Mukesh Ambani’s Antilia becomes the ultimate perk worth compromising all else for. The grandeur of Rashtrapati Bhavan, with all the pomp and show that goes with the job, is nothing short of awe inspiring. It was designed to dazzle the peasants, and it continues to dazzle the peasants — us! An invitation to Rashtrapati Bhavan is undoubtedly thrilling, no matter how cynical and blasé one might be. I got a huge kick being there during my sole visit a few years ago, when Pranab Mukherjee was the privileged occupant in that gigantic space. Since Pranabda was a pretty tiny and compact man, watching him arrive for that brief and far from impressive encounter was an amusing sight. A diminutive figure, flanked by strapping guards and handsome ADCs, walked slowly towards the assembled guests, who had been instructed to line up and behave themselves. Feeling like a delinquent schoolgirl, I was tempted to disobey and flirt outrageously with Pranabda, perhaps try and impress him with my far-from-impeccable Bangla. Well… I tried. The only line our worthy President uttered was: “It is bery bery hot today.” Understatement! That was it. And he was gone after posing for an official portrait with our motley group.

We know why Pranabda opted to become President of India — it was a consolation prize for not fighting for the prime ministership and shrewdly shifting the goalpost, leaving Dr Manmohan Singh to play footsie with Sonia Gandhi as her obedient colleague. Given Pranabda’s extraordinary political trajectory — from an upper division clerk to election manager, powerful minister, seven-time MP and finally the country’s President, here was a highly cerebral man who knew how to keep his emotions out of the political equation. Indira Gandhi said about him (according to Prithviraj Chavan): “Whenever Pranab is given any confidential information, it never comes out of his belly. What comes out is only the smoke from his pipe.” She should know — Indira Gandhi’s exaggeratedly secretive nature cost us plenty!

Even while Pranabda continued as President, after Narendra Modi became India’s Prime Minister, it is interesting to read his comments during the turbulent time when India faced widespread protests against the citizenship law and the proposed National Register of Citizens. Said Pranabda: “Democracy thrives on listening, arguing and even dissent.” He followed that up with: “The present wave of largely peaceful protests will once again help to deepen India’s democratic rules.” Well, India is facing waves of protests right now.

With the government bringing in the “Agnipath” scheme, the protests have turned violent and ugly. Let’s see how this crisis pans out, as we anoint the next President. Citizens are busy sharing their opinions in chatrooms. Said one: “Agniveer should be introduced for our MPs and MLAs in Karamveers and Savaveers categories respectively. No pension or other privileges/benefits should paid at the end of five years. Only 25 per cent would be considered eligible for re-election at the end of the period. Citations like ‘Maha Sevaveer’ to be given to those who make it as Cabinet ministers…”  It’s a super suggestion.  Till then, we’ll have to keep up with the games that Presidents and governments play.

Draupadi Murmu’s credentials cannot be doubted or questioned. In one stroke, the BJP-NDA government has once again established its shrewd political acumen. The former Jharkhand governor comes with the right “signalling” material, being a tribal Santhal woman, who has bravely coped with enormous personal tragedies after losing her husband and two sons. She is mother to a daughter, and has the respect of the entire nation for her service to society. The BJP can flash both cards proudly and legitimately — her appointment will successfully court Adivasi and women voters, and show the world how progressive India is, if one can only overlook the obvious conflicts.

Gopalkrishna Gandhi’s stated reasons for opting out are significant. It is also important to note that Sharad Pawar (“always the bridesmaid, never the bride”) and Farooq Abdullah (“Motorcycle Diaries”) both said “no, thank you!” to the Opposition bloc’s offer. For one, the Opposition candidate does not stand any chance, given the numbers game. Poor Yashwant Sinha was a goner from the word go. But more than just that, read what Gopal Gandhi said before turning down the proposal: “Having considered the matter deeply, I see that the Opposition’s candidate should be one who will generate a national consensus and a national atmosphere, besides Opposition unity. I feel there will be others who will do this far better than I.” It was a graceful and dignified slap in the face which cannot be ignored. There is a much deeper and bigger message that needs to be understood in the right context — the obligations and critical role played by the President of India in a democracy during a national crisis that demands fair play and not lip service.