The sin of hubris has been a continuing theme that has captured the imagination of historians, philosophers and theologians alike 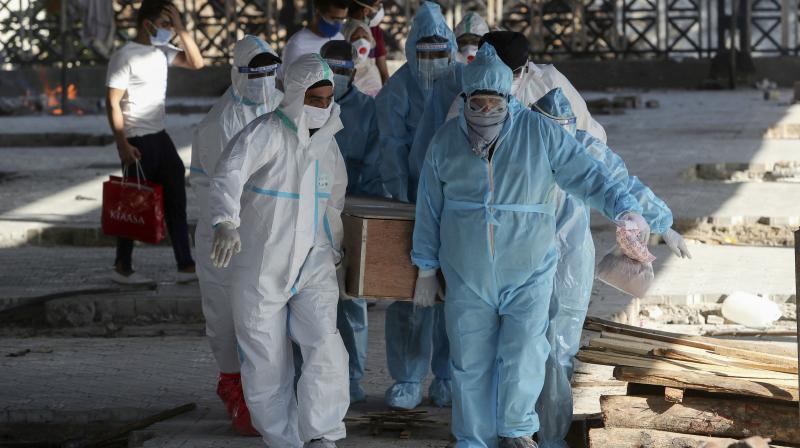 Prime Minister Narendra Modi, on January 28 this year, had declared India as one of the countries that had successfully controlled the coronavirus. (Photo: AP)

The Greeks had words for every personality frailty. In the present case three of these words are of relevance to us: (1) Hubris; (2) Hamartia; and (3) Narcissim. Hubris is described in the dictionary to simply mean “excessive pride or self-confidence; arrogance”. Hamartia is usually an artifice in Greek drama as the inner quality that initiates a “movement of spirit” within the protagonist to commit actions which drive the plot towards its tragic end. Narcissism is the pursuit of gratification from vanity or egotistic admiration of one’s idealised self-image and attributes. The term originated from Greek mythology, where a young man named Narcissus fell in love with his own image reflected in a pool of water. In the drama of Narendra Modi today, we see quite a bit of the hubris and overweening narcissism, both fatal flaws. The question before us now is whether this is the moment of hamartia which will drive the plot to its tragic end?

The sin of hubris has been a continuing theme that has captured the imagination of historians, philosophers and theologians alike. The Biblical saying “pride cometh before the fall” applies equally well to Ravan, the great king of the Rakshasas whose long years of penance secured him the favor of Brahma, who rendered him invulnerable to the gods and demons alike. We know what happened to him. We, the lesser Hindus, also know that it’s not necessary to be a tyrant in order to attract the malefic attentions of the gods. Bali, the celebrated Daitya, rose to such an eminence that Indra and the other gods had to seek the intervention of Vishnu, who once again obliged the devas by consigning Bali to patala, or the netherworld.

On April 19, 1959, Cuba’s Fidel Castro paid his first post-revolution visit to Washington and met then vice-president Richard M. Nixon for three and a half hours. Following this meeting Nixon appraised him thus: “The one fact we can be sure of is that he has those indefinable qualities that make him a leader of men. Whatever we may think of him, he is going to be a great factor in the development of Cuba and possibly in Latin American affairs generally.” In October that year, President Dwight D. Eisenhower authorised a plan to overthrow Castro.

The plan called for the landing in Cuba of a force of Cuban émigré fighters armed and trained by the CIA. This force was then meant to storm its way inland, releasing in its wake a popular upsurge that would topple Castro, just like he did the dictator Fulgencio Batista. Fortunately for Castro, Bay of Pigs, the place chosen for the landing, suffered from two crucial disadvantages. The beach was close to Castro’s favorite holiday home and hence had a Cuban military unit garrisoned on it. The shallow waters of the bay also concealed shoals that required the landing force to wade ashore from a great distance, making them sitting ducks. That is precisely what happened. As US warships watched helplessly, President John F. Kennedy realised that he was led up the path and the CIA’s urgent pleas for US air strikes would strip whatever was left of the fig leaf of innocence donned by the United States. He abandoned the landing force to its fate. The few who survived ended up in Cuban jails. When asked what went wrong, JFK’s national security adviser McGeorge Bundy replied: “Hubris!”

In February 1961, Robert McNamara, a brilliant Harvard MBA and a former head of Ford Motor Company, took over as the US defence secretary. He took with him an equally brilliant team of systems analysts who were to transform the way the US fought its wars in the future.

The systems analysts quantified everything. Every weapons system ordered was subject to a cost-benefit analysis. Even military results were quantified in terms of “area pacified” and “body count”.

When Clark Clifford, who took over from McNamara as defence secretary, toted up all the “body count” figures of the war, he found it had exceeded all intelligence estimates of enemy combatants by over half! When he asked: “Why are we then still fighting?”, President Lyndon Johnson knew that he too was led up the path. Some years ago I met Robert McNamara at a seminar on the Cuban missile crisis organised by Harvard’s John F. Kennedy School of Government. I asked him how he had got it so wrong. He replied with one word: “Hubris”.

In 1987, Indian troops went into Sri Lanka at the invitation of the two warring parties to impose an agreement midwifed by then Prime Minister Rajiv Gandhi. When the LTTE reneged on it, the then Indian Army Chief, Gen. Krishnaswamy Sundarji, assured the government that he would be able to eliminate or disarm the LTTE in just a few weeks. We know what happened. It continues to be sad chapter in the Indian Army’s history. It even cost Rajiv Gandhi his life. The question that baffles is how is it that the Indian Army ended up fighting a group that was fostered and supported by the Indian government? And what made the Indian Army think that it would be able to wipe out its onetime protégé in just weeks, if not days? Hubris?

Prime Minister Narendra Modi, on January 28 this year, virtually addressing the World Economic Forum’s Davos Dialogue, had declared India as one of the countries that had successfully controlled the coronavirus. He said: “India took a proactive public participation approach and developed a Covid-specific health infrastructure and trained its resources to fight Covid.” He went on to declare ‘mission accomplished”, very much like President George W. Bush had declared atop an aircraft-carrier off the coast of Iraq. He then went on the push his luck a bit further by claiming that India, as the world’s largest vaccine producer, would now assume the charge of saving the world! He even announced that this was a turning point in India’s economic history and that India was once again poised for greatness.

Was this his moment of “hamartia”? Will this take us to the denouement or the final part of a play, film or narrative in which the strands of the plot are drawn together and matters are resolved and the theatre ends?