Opinion   Columnists  25 May 2020  Manish Tewari: Locked down in India, a view from the ground
Opinion, Columnists 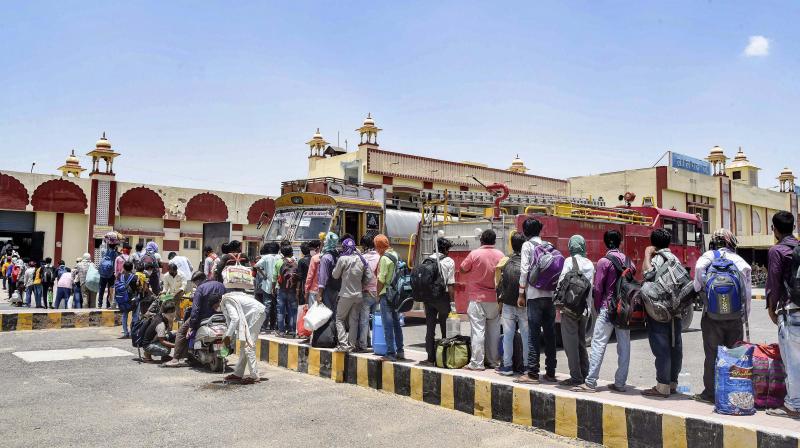 Migrants stand in a queue on a hot sunny day at Lalgarh Junction to board a special train to Bihar, during the ongoing COVID-19 lockdown, in Bikaner. PTI Photo

Like most other Members of Parliament, I was also stuck in Delhi as the Parliament was in session when the Janata Curfew followed by the lockdown was announced. It was only after the mandatory 14/21-day quarantine requirement and the attendant curfew was relaxed in Punjab that I was able to travel back to my parliamentary constituency Sri Anandpur Sahib.

During the lockdown most public representatives worked their phones and the Zoom conferences to keep in touch with their constituents and the administrations in their respective districts but most of us without exception were like fish out of the water as we were not on the ground. Some MPs did drive thousands of kilometres to reach back and then “endure” the mandatory quarantine. Those who violated it faced the ire of the people and a backlash from the media for all the right reasons.

My parliamentary constituency is spread over four districts of Mohali, Rupnagar, Shaheed Bhagat Singh Nagar and Hoshairpur. In addition to meeting my constituents I was keen to learn from the district administrations, doctors and other frontline workers their experiences and learnings in handling the pandemic.

I personally travelled to each district headquarter to thank the respective district administration and interact with them. All of them independently told me that while a lockdown did help in sensitising people but the abrupt manner in which it was announced at a four-hour notice was completely and absolutely counterproductive. It created avoidable problems for those who were charged with implementing the lockdown in every village and ward of India. None of them could understand as to how the coronavirus was not a threat till the 21st of March and overnight became a national emergency? Had they got a week’s lead time to prepare for the lockdown even the lockdown would have been far, far more effective in achieving its objectives.

The first thing they flagged was that physical distancing in densely packed urban agglomerations is a physical impossibility. A glaring example is Nayagaon, a Nagar Panchayat in my constituency, not even 500 metres as the crow flies from the residence of both the chief ministers of Punjab and Haryana in Chandigarh. It is a shame as to how our working class whom we pejoratively call migrants live. At times there are 12 people to a room — six sleep during the day and work at night and the remaining six sleep during the night and work during the day, sharing one bathroom and maybe a small cooking space. Suddenly, the government ordered a lockdown. Now all these 12 people were confined to one room with no place to even sit properly what to talk of sleep. How can there ever be any physical distancing in such a situation? Obviously people would have to come out of their hovels and, therefore, there would be inevitable curfew violations and altercations with the police. The bottomline being that a lockdown of this rigor and elongated period of time is unsustainable in India.

The second was the panic that the Prime Minister’s back-to-back addresses on March 22 and 23, 2020, caused especially among the illiterate and thereby vulnerable sections of people. The reason why crores of people broke the lockdown by March 27 and 28 was that they were convinced that they would die of the disease that had come from oversees if they stayed in the city. The economic uncertainty was subsequent. What the Prime Minister overlooked is that 93 per cent of India’s labour is in the unorganised sector and a substantial number of them are daily wagers.

The television media is equally culpable in the scaremongering. The 24X7 saturation coverage of the spiky virus and the casualties around the world spooked people. While the middle classes and the rich retreated under their beds the poor baulked and decided to get home to the safety of their villages and communities. A refrain that our young frontline administrators told me that they heard over and over again is “Marna to hai to kyon na apne ghar pe maren — We would rather die at home”. Nothing that they did could stem the exodus that followed.

Then the task of setting up quarantine camps, arranging food for the guest workers, and later trains to transport them back home taxed their limited resources — both human and material — to the extreme. Contrary to popular perception the Indian administrative footprint per capita of population is very light.

Most of the senior staff in the district virtually worked around the clock. Most left their little children with their parents and have still not seen them for over two months. Coupled with that was the insecurity of the frontline workers. One of my deputy commissioners narrated the story of one of their frontline microbiologists who went everywhere collecting samples personally. She told him, “if anything happens to me do not abandon me”, for most of the state service employees have virtually no health cover worth the name. One thing every state must do is to provide the best health insurance cover possible for all their employees. This would be the best way of expressing our gratitude to them.

The third problem that they flagged is that this notion of running India from Delhi via NDMA guidelines is not only obtuse but downright silly. One police officer told me that it is bright daylight at 7 pm and asking people to get back into their homes is impractical. That is the time when heat recedes and people venture out of their homes for a breath of fresh air. They said every district should have had the leverage to customise the implementation of the lockdown within a broad framework.

Another officer told me jocularly that when milk booths should be open we open liquor shops. He said most liquor sale takes place between 7 pm and 9 pm when people pick up their stock. In summers the curfew could easily be from 6 am to 9 pm. As a senior political leader in the district told me it seems corona is some nightly apparition that only emerges after 7 pm and stays till 7 am in the morning.

However, what struck me was the utter fearlessness of the officers and frontline workers as one senior superintendent of police put it in a matter-of-fact manner — I must have had Covid twice in the past two months. They did not even have the luxury of falling unwell.