Clearly, the size of India’s health budget is far from satisfactory 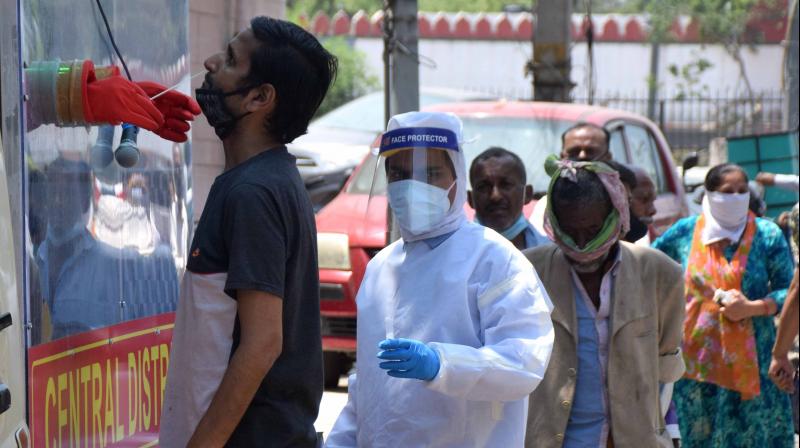 People line up to get tested for the novel coronavirus at Sadar Bazar Idgah Road in New Delhi the wake of the Covid-19 pandemic, on Friday, April 24, 2020. (Asian Age Photo)

In the ongoing battle against the coronavirus pandemic, both central and state governments have shown great commitment in meeting the medical needs of Indians. Medical facilities and capacities across the country are being enhanced almost by the hour, mainly with regard to enhancing the capacity for testing, admitting and treating patients affected by the coronavirus. More and more ventilators are being arranged to support patients. The government must be complimented for responding quickly, whether by taking decisions on the lockdown or expanding the medical facilities necessary to fight the coronavirus. But the question is: have we really paid enough attention to building a proper public healthcare system?

While other countries worldwide may not be doing much better than India in handling this crisis, it is important to note that many of them spend a much bigger proportion of their GDP on healthcare compared to India. China, the country from where the coronavirus is said to have spread to various parts of the world, spends 2.9 per cent of its GDP on building public healthcare facilities, while Brazil spends about 4.4 per cent. The United States, which has emerged as the hardest-hit country going by the number of infections and fatalities, spends more than 8 per cent of its GDP on public healthcare. Even Iran spends about 4.4 per cent. Our next-door neighbour, Pakistan, is a ready reference point for us on various counts, and we boast, rightly so, that India stands far ahead on various fronts. But sadly, on the issue of healthcare, India is doing only marginally better than Pakistan. While Pakistan spends 0.9 per cent of its GDP on its public health system, India spends just a little bit more (1.1 per cent). This, unfortunately, has not changed over the past two decades.

The problem of poor public healthcare in India is not limited to the government spending too little on it, but also affects what the money is actually spent for. Most of the country’s health budget is spent to create facilities for providing treatment to patients, and very little on creating facilities for preventive healthcare – such as developing facilities for immunisation, screening for diseases and similar systems. Even if a large proportion of the health budget is spent on creating healthcare facilities with the main focus on providing adequate and better treatment, unfortunately we have not been able to achieve satisfactory results. No wonder that in a survey of IAS officers across 410 districts to assess their preparedness for handling the coronavirus crisis, a large number of them mentioned the shortage of even very basic healthcare facilities like beds and ambulances in many district hospitals.

It is not unexpected for IAS officers to paint a grim picture of the available heathcare facilities at the district level during this crisis as many of them would have anticipated a crisis looming large and may have sought to be better prepared. But there is other evidence too which suggests that even in normal times, the public healthcare system is far from satisfactory. The situation is so dismal that large numbers of our citizens prefer to go to private hospitals for treatment even if it is very expensive. Some lower middle class and poorer patients also prefer to go to private hospitals if they are able to afford the expense.

Clearly, the size of India’s health budget is far from satisfactory. Hopefully the country will get over the current coronavirus crisis sooner than later, but in the long run it is vitally important that the government pays a lot more attention to building a more stable healthcare system. The CSDS study indicated that while 32 per cent of Indians are ready to pay more for better care in government hospitals, an overwhelming majority (62 per cent) of Indians look forward to the government arranging for improved healthcare facilities. There is also hope. A majority of Indians (52 per cent) report some improvements in public healthcare facilities and government hospitals in the past few years, but a lot more still needs to be done. We must draw the right lessons from the coronavirus crisis.