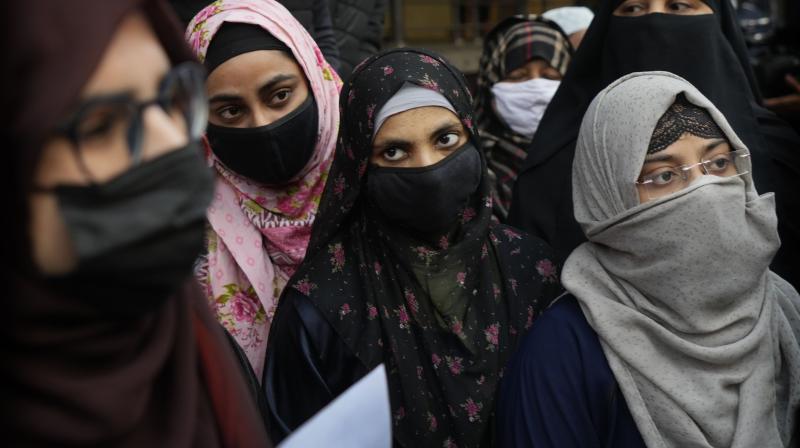 Two hundred million Indian Muslims are no small number and of them burqa and hijab wearers are a minuscule number. (Representational Image/ AP)

Sometime in the early 1960s, Rajanish Chandra Mohan Jain — who would later evolve into Bhagwan Shri Rajneesh and still later into a cult guru as Osho — taught philosophy in a college in Jabalpur. Even by then, he had launched on his journey to gurudom and was unconventional in some ways. One of them concerned his sartorial choice. He would wear a south Indian mundu and go to the college. The principal sent for him and advised him to dress decently and change over to Western or Indian national dress.

The rebel that he was, Rajanish insisted that he wouldn’t do that and if compelled, he would exercise his fundamental right to ‘freedom of religion’ and would adopt the attire of the “digambar” Jain, the faith to which he belonged! The principal realised the possibility of the desperado carrying out the threat, relented and permitted him to wear the mundu. The issue was resolved!

The BJP would have done well if they had the imagination of the principal and declared that they would pass a law doing away with hijab and burqa for Muslim women, if they were returned to power in UP. That would have done wonders as most Muslim women would have voted for them as they had done when triple talaq was made illegal. Instead, the ruling party kicked up an avoidable fracas, played into the hands of misogynist Muslim clerics and exploitative religion-ridden political parties that made it appear what was at stake was the Muslim identity! The non-Indian cultural baggage of Islam passes for Muslim Identity!

Our former ambassador to the US and a distinguished Hyderabadi, Abid Hussain, on an occasion summarised the predicament of our Muslims and said they would have no problems if they considered themselves Indian Muslims and not Muslim Indians! He allowed his Hindu wife to keep her faith and named his daughter Visakha, after the place where she was born! Statistics suggest almost 90 per cent of Indian Muslims are local converts, many of them Buddhists-turned-Muslims — Kandahar, Kashmir and East Bengal are obvious examples — and about ten per cent came with the invaders and made this country their home.

Islam imposed its non-Indian names and culture on the new converts. This is a later day parallel to the pastoral central Asian herders imposing their so-called Vedic culture on the native Indian population which led to the pernicious caste system which plagues the Indian society even now. Historically, culturally deluded Muslim leaders in British India promoted a two-nation theory with the covert support of the colonials and sowed the seeds of the two-nation myth that finally led to the partition of the country!

Indian Muslims have a lesson to learn from the Syrian Christians of Kerala. This group of proud Christians are as old as Christianity itself and its practitioners, in culture, attire, and the spoken language, are as Indian as any other. Their unique Christian identity is sustained by its Indianness. Two hundred million Indian Muslims are no small number and of them burqa and hijab wearers are a minuscule number. It is almost foolish to think that giving them up would affect the cultural identity of Muslims! In fact, they had an historic opportunity in Independent India to build a uniquely Indian Islamic culture shaking off the non-native cultural burdens!

As that brave rebel, Taslima Nasrin, often says, where religious practices or customs offend human rights, the former should not be sustained in the name of secularism or culture. Widow burning and infanticide were considered religious practices by the Hindu community in British India. Thanks to enlightened Indian reformers and responsible British administrators, not only these two, but many other abominable customs were abolished or abandoned! These reforms have not weakened the Hindu identity! Educated women among Muslims should question why they should be shrouded in a black burqa or veil hiding their elegant clothes while their men go around smartly dressed! A vibrant society would evaluate its cultural practices and customs from time to time to cope with a fast-changing society. Stubbornly holding on to them would not only retard its cultural evolution but would show it up as an anachronism!

Has not Kalidasa said that all that is old is not necessarily good? Isn’t it time for us to revisit our Constitutional provisions governing the freedom of religion? Art 25 guarantees the “freedom of conscience” and “the freedom to profess, practise and propagate to all citizens”. While we should value freedom to profess and practise one’s religion, one fails to see why there should be the freedom to “propagate” one’s religion in a secular State! It is the propagation that disturbs my sleep in the early hours of the morning through the amplified singing at the temple or the muezzin’s raucous call for prayer! Why should one’s religion intrude into another’s home? Other irritants include gaining converts for a price, and unsolicited praying for the sick with the hidden agenda of inducing them out their faith. In marriages across religions, the hideous practice of forcing people to change their religion and name may bring a spouse but cost the bride or groom their identity! Very often the victim is the girl in our male-dominated society!

It is time our Muslims give thought to liberalising and Indianising Islam; and it should start with their names. If Christians could retain both Indian and Christian names, like Christopher Kishore or Hemima Rani, why cannot there be cross-cultural names like Kamala Khan or Vempalle Sharif, or Akhila Ayesha! This would make the names more integral to our culture!