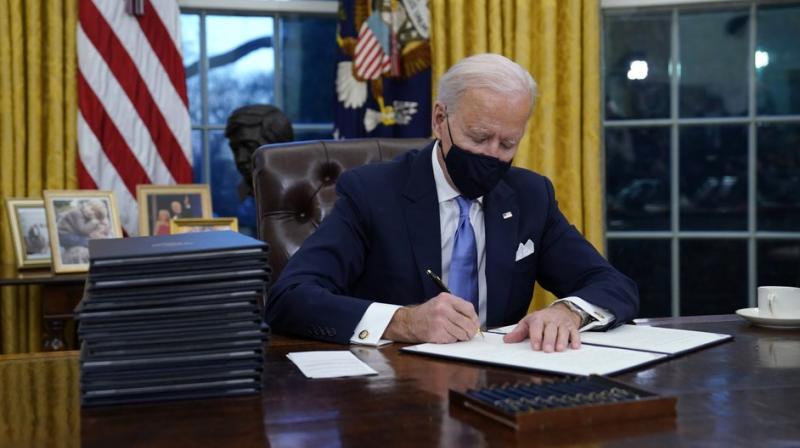 Given the domestic economic pressures and promises made, Mr Biden may well not be able to ease up on the demands being made on India on the trade and economic side (AP)

The India-US relationship has waxed and waned depending on how this mix between values, defined by principles, and interests, based on pragmatism, has worked out. As a new administration with a very different and well-defined ideological orientation takes charge in Washington D.C., diplomats and observers in both countries will wait to see what kind of a balance would be struck between the two considerations in taking the India-US relationship forward.

For a long time, when leaders of both countries met, they could only speak about their shared democratic values because their interests were so wide apart. The simultaneous occurrence in 1991 of India’s economic opening up and the end of the Cold War added the ballast of shared interests to the relationship. India's desire to secure new markets, new technologies and foreign investment as well as its need to diversify the country’s sourcing of defence equipment and bolster its national security, at a time when China was rising and jihadi terrorism had come closer home, created a powerful and potent mix of values and interests.

Long-term and durable bilateral relations between nations do require a balance between values and interests. The principles by which nations define themselves constitute their values, but a purely values-defined relationship cannot endure unless it also addresses the individual needs of both partners. While political and intellectual leaders define values, it is left to diplomats to identify and secure the pragmatic foundations of a relationship.

Several developments at home and around the world over the three decades, from 1990 to 2020, ensured that the bilateral relationship grew from strength to strength. However, even as global developments continued to favour closer India-US relations, domestic political and economic developments during the tenures of President Donald Trump and Prime Minister Narendra Modi did emerge as potential problems for the durability of the relationship.

Mr Trump’s “America First” policies created new uncertainties for India’s “interests”, in areas such as trade and immigration policy, while Prime Minister Modi’s “Atma Nirbhar Bharat” trade and industrial policies and India’s desire to maintain its good equations with Russia and Iran, raised concerns in Washington. However, the weakening of the “interests” side of the equation was balanced by greater emphasis on the “values” side, with Mr Trump hailing India’s democracy while turning a blind eye to Mr Modi’s majoritarian communal politics, in his campaign against non-democratic China. If Mr Trump had been re-elected it remains to be seen how this equation would have worked out. President Trump may well have continued to ignore the BJP’s politics, but would perhaps have demanded his pound of flesh on the trade and market access side.

What now with the Joe Biden-Kamala Harris duo? Clearly, their values are very different from Mr Trump’s, and in a world where domestic politics increasingly influences foreign policy no country can ignore the influence of these “new values” at home on US foreign policy. At the same time, given the domestic economic pressures and promises made, Mr Biden may well not be able to ease up on the demands being made on India on the trade and economic side.

Consider then the emerging balance between principles and pragmatism -- the “principles” dear to the new Democratic administration in the US may favour Mr Modi’s India less than the principles that defined Mr Trump’s attitude; and domestic policy pragmatism may require Mr Biden to stay the course on the economic demands the United States has been making on India.

On the Indian side, Mr Modi has weakened India’s global standing as a multicultural, pluralistic, liberal and secular democracy, especially in his second term in office, while at the same time pursuing insular trade policies that raise hackles in Washington D.C. How Mr Modi intends to redefine and rework his approach to the new America of Mr Biden and Ms Harris remains to be seen.

The fact that vice-president Kamala Devi Harris is partly of Indian origin and that several Indian Americans have been nominated to serve the Biden administration is no guarantee of a smooth ride for India in the US capital. While the interest groups that lobby for good relations between India and the US may have better access to the Biden-Harris team, the team itself may have many whose values clash with the BJP’s majoritarianism. Listen carefully to Mr Biden’s speech.

In the past it used to be assumed all too easily that Indian Americans are India’s diplomatic asset. Indeed, they were. Their role in ensuring congressional support for the India-US civil nuclear agreement cannot be underestimated. Prime Minister Modi’s rallies in New York and Houston, attended by enthusiastic Indian Americans, also helped Indian diplomats build bridges with Mr Trump’s people. However, those Indian Americans lost out in this election.  The Indian Americans now in office are the ones who may well have disliked external affairs minister S. Jaishankar refusing to meet US Congresswoman Premila Jayapal and her delegation, or his quoting Donald Trump approvingly in his book.

Among senior Biden administration officials there are many from the Obama administration who know India and Indians well, including the new CIA director William Burns and the pointman for Asia, Kurt Campbell.  They may well wish to strengthen relations with India. It remains to be seen if their diplomatic “pragmatism” in the pursuit of “interests”, is able to score over the assertion of “principle” by those who seek to defend the liberal, democratic “values” of the Democratic Party. Clearly, Prime Minister Modi will have to undertake some reset in his domestic politics and policies to ensure that he gets as warm a reception in Joe Biden’s America as he did in Donald Trump’s.