Sanjeev Ahluwalia | As bells toll for 2021, an end is also a beginning

At present, for around 37 per cent of jobs in developed countries and 10 per cent in developing countries, working from home is possible 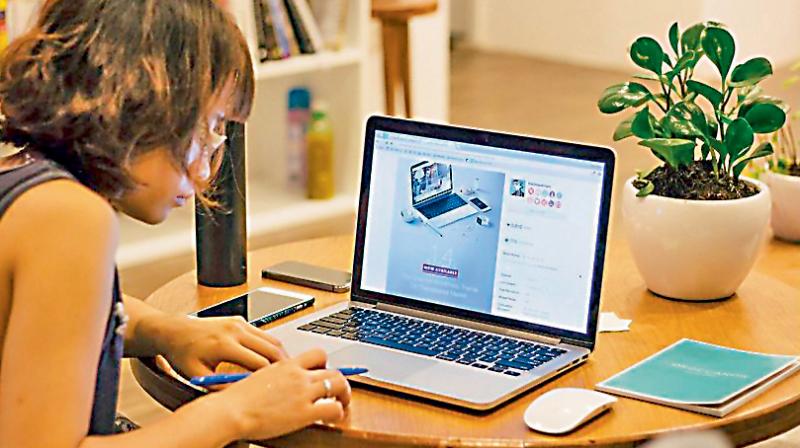 The Covid-19 pandemic which inspired the new normal of “work from home” also questions an individual-centric world. (DC file photo)

An end is also a beginning! As hopeful as this may sound, there is a sting in its tail, quite like the viral variants of Covid-19 which rise and strike just when our masks are down. Jobs continue to shrink in an economy that is shackled by fear and uncertainty — with holidays cancelled, work trips aborted, and the nature of work transmutes into only what is possible from home.

And yet there is hope for adaptive change. Is it time to rethink the open economy, “industrial organisation” construct which puts the individual at the centre, spawning a society where families — yesterday’s appendages, have been replaced by other social groups?

The Covid-19 pandemic which inspired the new normal of “work from home” also questions an individual-centric world. At present, for around 37 per cent of jobs in developed countries and 10 per cent in developing countries, working from home is possible. With enhanced global digitalisation, this proportion can only grow. Will the future then bring back the family front and centre?

A family-centric social vision appears to be regressive because of the unpalatable associations with institutionalised privilege and the overweight role played by family wealth in deciding one’s future. A future populated by pre-industrial “cottage industry” enterprises and trade guilds does not go down well with the fabulous wealth of the unicorns who embody present-day meritocratic growth aided by unblemished investor greed.

In India, family enterprises thrive. More than two-thirds of Indian business enterprises, and not just the small ones, adhere to the family-first motto — a model long junked in the West.

Incidentally, additive manufacturing or 3D printing was all the rage two decades ago as the hottest new tech innovation. It was supposed to alter supply chains and encourage everyone to decentralise production, closer to consumers and workers, reducing the incentive to migrate for work. Joining pre-industrial family-based organisational structures at the hip to post-modern corporate architecture has one advantage. High achievers and winners of industry awards would finally be able to say, truthfully, that this award really belongs to their families who made it all happen!

Families have traditionally played an outsize role in choice of profession, place of residence, generic preferences, and habits. Assessing local job applicants as an organic part of their family was common in the colonial period to keep cultural tensions from the intermixing of races to a minimum. You had to seem to belong.

Access to Western education favoured men, who thereafter became Janus faced — au fait with formal Western culture at work but with deeply Indian traits at home, like — not doing the dishes after dinner or abandoning the formal Western-style dining table for a hearty wazwan while lolling on a richly embellished, Kashmiri carpet or abandoning the formality of Western classical music forms for more mellifluous local tunes whilst smoking a cheroot or a hookah — pursuits to which even the British succumbed occasionally.

Assessing the family, whilst evaluating a job aspirant, is still not dead, though frowned on by corporate good governance norms and progressive social policy. But despite what matrimonial advertisements espouse, marriage, in India, is still a bond which spreads beyond the two persons going through the formalities. Subtle attempts to prove the “compatibility” of the two families include paid services by specialised intermediaries, who produce a family history dossier, as easily as any corporate, talking up its product. Of course, one woman’s grief is another’s joy, as a mother-in-law once told her newly-minted daughter-in-law, notably, without clarifying which end of the spectrum she herself was at.

The government should consider ramping up formal social insurance cover at more generous terms and on a larger scale to communities and families.

We are accustomed to wealth and income inequality as a formidable social handicap. But flashpoints are more likely amongst volatile, urban youth, frustrated by abandoned education plans or cruelly ended dreams for non-existent jobs. This seems like a suitable time for a government initiative to increase youth employment — an urban NREGA tailored to urban aspirations.

Jean Dreze, the naturalised Indian economist with a heart and purposefully one-handed solutions, favours the use of government-financed job stamps, given to government entities in lieu of funds for the labour part of maintenance jobs, redeemable for workers at authorised placement sites.

The generic idea to subsidise employment is sound. But adding one more hoop, before government entities get to spend their fiscal allocations, could slow down the glacial pace at which budgets are used.

Other options could be new private sector employment partly paid for by the government for three years, as an incentive for using labour rather than capital (which is heavily subsidised through investment incentives), especially in sunrise sectors like renewable energy maintenance services, IT, e-commerce, or in decarbonisation schemes to deepen green cover and blue (water bodies) areas in cities. Gender targeted government intervention to bolster the urban job market makes sense considering the rock bottom level of seven per cent participation by women in the urban workforce (CMIE May-August 2021) versus 64 per cent by men.

Here too, a community approach would be preferable over individual employment, with batches of young people from contiguous locations, collectively employed at the same site, to ease the pain of travel and the unfamiliar, rigorous routine of a workday. Families, communities, and urban local governments are related urban social and economic entities. All three suffer from fiscal neglect and low prioritisation in government schemes.

Even as a globalised world was coasting towards a glossy, future metaverse of empowered individuals, the pandemic has awakened interest in the economic benefits of a sputtering, near-forgotten, social model of family first.

This is heart-warming. Family and community are the glue which binds the archipelago of humankind, though ancient gender and authority related family role models are unfit for a more equal, more egalitarian world.

So even as the bell tolls for 2021, let it also toll for past inequities and injustices and herald their replacements — honest collaborations, good intentions, bottom upwards development and supportive technological solutions. There is light at the end of this tunnel. We must keep going, and long enough, to see it.