Supersession: All have right to ask questions

Whenever it has happened in the past it has left the institution deeply wounded. 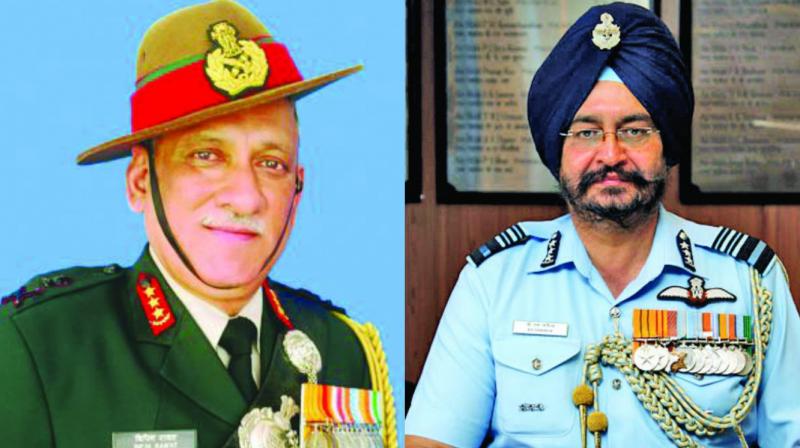 As the newsbreak flashed across television screens last Saturday evening, December 17, that the Indian Army and the Air Force would have new Chiefs, Lt. Gen. Bipin Rawat and Air Marshal B.S. Dhanoa respectively, I immediately tweeted asking the Prime Minister as to why two or, perhaps, even three officers senior to Gen. Rawat had been superseded by his government. Even a week later, there are no answers forthcoming from the government, much less the Prime Minister.

The first question is: Whether this “deep selection” or supersession was necessary? Whenever it has happened in the past it has left the institution deeply wounded. In 1957, Gen. K.S. Thimayya was selected over two senior lieutenant-generals — Sant Singh and Kulwant Singh. While the former put in his papers the latter stayed on. Again in 1983, Gen. Arun Kumar Vaidya was promoted over Lt. Gen. S.K. Sinha, who promptly put in his papers. After that for a good 33 years the seniority principle held the field and perhaps for good reason.

Without casting even a whisper of an insinuation on the professionalism or the brilliance of Lt. Gen. Rawat as either a commander or a solider, the source-based reasoning that has been put out by the government for its action have not been accepted by retired service officers.

Lt. Gen. Ike Singha (Retd) put out a Facebook post entitled “Surgical strike on the Indian Army”, where he critiqued the rationale of the government. It may be pertinent to point out that Gen. Singha was head of the peacekeeping mission in Golan Heights in Syria and Israel from 2012 to 2015. Similarly, Lt. Gen. Harwant Singh, the former deputy chief of Army Staff, concluded a piece in a national daily with the following lines: “In the present case, the government has simply failed to come up with any compelling reasons to break the chain of seniority and has, in fact, politicised the appointment of the Army Chief”. In a tweet Lt. Gen. Tej Sapru put it as follows: “Violation of norms of seniority by the govt. in selection of COAS, a sad day for the armed forces. Not good for the system”. Lt. Gen. Panag in a piece concludes with the following advice to the government: “Last but not the least, to partially undo the damage done to the Indian Army, the government should make use of the two eminent, superseded generals either in the proposed higher defence management structure or at any other appropriate level. It would be unfair to make them serve under a junior. Their loss of honour because of an ambiguous selection process, if not restored, will have an adverse effect on the morale of the Indian Army”.

However, the profoundest rationale for not bypassing the seniority principle came from the former Vice-Chief of the Army, Lt. Gen. Vijay Oberoi. In an article he wrote: “I need to narrate a discussion held on the sidelines of a seminar at the College of Defence Management Secunderabad, many years back. During a discussion I had with two cerebral military intellectuals — Gen. Raghavan and Air Vice Marshal Kak, the three of us discussed the pros and cons of selecting a service chief on the basis of seniority, as was the norm vis-à-vis an open-ended selection from the C’s-in-C. After weighing the issue with great deliberation, we came to the conclusion that there were more negatives in the latter, as chances of selection based on political, sycophantic and non-professional reasons may become predominant in due course, with professional and character qualities being sacrificed on account of extraneous issues. With such precedences, even appointments of Army and corps commanders may meet such a fate later, throwing professionalism to the winds”.

It is, therefore, apparent that the logic of deep selection has not cut any ice with the retired top brass of the armed forces though it may be only fair to point out that some retired officials have also supported the selection/supersession. These are all grizzled military men, and not some politicos tilting at windmills.

That brings us to the second question that the government and the BJP have been harping about and that is are political parties entitled to ask questions if the selection processes in the armed forces are a tad strange, if not irregular. This question becomes all the more germane because the government has been trying to run this gauntlet for a while that it is anti-national to question the BJP, seditious to question the government and, in fact, treasonous to even ask legitimate questions of the defence establishment whether they pertain to operations along the LoC or senior appointments in the three services.

This argument is not only insidious but also ludicrous, to say the least. In all democracies around the world, the principle of civilian supremacy in civil-military relations is well established, if not cast in stone. While the civilian leadership defers or should defer too the armed forces on operational imperatives, the broader trajectory of higher defence management is something that falls squarely to the remit of the civilian leadership. The strategic philosophy that should guide the defence leadership depends on a host of geo-political and geo-economic imperatives as well as relationships or the lack of it with other countries.

In furtherance of this dictum, even Parliament has both standing and consultative committees that exercise oversight on the functioning of the defence establishment that is not limited to policy and budgetary matters. It is, therefore, imperative that both parliamentarians and political parties must ask the hard questions when required on matters that impinge on national security.