Barbies have hardly been symbols of either feminism or modesty or female achievement. 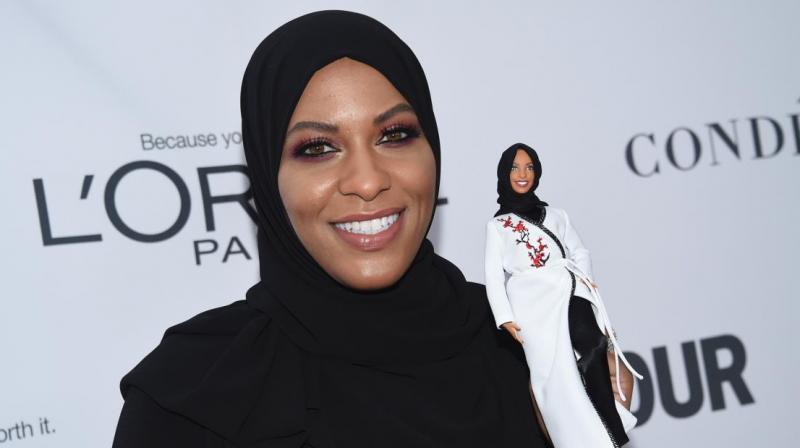 Ibtihaj herself talked about how the doll made her feel included given the fact that she had felt excluded in so many ways before. (Photo: AP)

A new Barbie was recently introduced to the world. Part of the Barbie “Shero” series, the new doll is designed to honour US Olympic fencer Ibtihaj Muhammad. Like Ibtihaj, who is Muslim, the doll sports a hijab. She also comes with an épée and is dressed in fencing gear. Unlike other Barbies, such as the Hollywood and Broadway stars also released as part of the series, this new doll has received extra attention in an America whose suspicions of Muslims are routinely whetted by the Trump administration. Ann Coulter, conservative talk show host and avid Trump supporter, wasted no time labelling hijabi Barbie “Jihadi Barbie”, drawing, like many others in the Trump camp, an indelible connection between all and any aspects of Muslim religious identity. As Per that political calculation, all hijabi women and frankly all Muslims are jihadis bent on eliminating American freedoms. Predictably, the other side of America, the millions more that oppose Trump and the politics of Islamphobia that have led to his election, were quick to celebrate the latest Barbie “shero” and her hijab.

With Americans squabbling over who gets to be a “shero” and if a “shero” can ever wear a hijab, and whether everyone who wears a hijab is interested in violent jihad, it is easy to forget that in Muslim-majority countries the debate may have different parameters. The complexities on that end are whether Muslim women have the freedom to forego the hijab, whether it is possible to be a good Muslim woman and not cover one’s hair or, conversely, whether all women who cover their hair are automatically good and moral Muslim women. The pressure — and in some countries the actual law — pushes in the other direction, requiring and enforcing modesty and punishing detractors with social and sexual harassment and public ostracism.

Within this environment, yet another nudge that being Muslim requires wearing the hijab can be somewhat onerous, empowering all those men and women who tell everyone what to believe and in particular what to wear. Here is fencing of another kind, and only those who have been subjected to it, made to feel like lesser Muslims, have had their character and their faith questioned and judged by unknown and strange others, can know how hurtful it can be.

But none of the people in the Muslim world, not the evangelists prescribing the hijab nor the non-wearing faithful who have irked them, are particularly important to the debate as it pertains to a Barbie doll. First of all, in a world wracked by war and displacement, where children starve and wash ashore dead, the promise of a doll, let alone a very expensive one, whether or not she wears a hijab, is not anything within the realm of possibility. Where these millions are concerned, American corporations are known for many things — their drilling for oil, their manufacture of bombs, their on-again off-again donations of humanitarian supplies — but not really for their plastic dolls.

Among Muslims in the West, the beleaguered minorities watching with horror as the lone wolves among them drive vans and buses into crowds, and with dismay as xenophobic right-wing politicians demand Muslim bans, celebrate the doll. Ibtihaj herself talked about how the doll made her feel included given the fact that she had felt excluded in so many ways before. Real life, even where Barbies are concerned, is far more complicated. Barbies have hardly been symbols of either feminism or modesty or female achievement. For decades after the first Barbie hit the shelves, the dolls’ bodily dimensions represented a grotesque exaggeration of female dimensions, one that feminist critics noted inculcated very negative ideas about female bodies among the girls who played with them.

In recent years, Mattel, the corporation behind Barbie, has wised up to these criticisms, producing Barbies that are brown and black and play sports and go to work. Even Ibtihaj herself is sensitive to these realities, emphasising in her statement how she had worked with Mattel to ensure that the Hijabi Barbie’s legs were thicker because as an athlete her legs are stronger than the usual.

As many Muslim feminists (some who wear the hijab and others who don’t) have pointed out, the hijab can be feminist; it is, after all, a fabric that takes on the morals and beliefs of the woman who wears it. The case of Barbie is more complicated: can a corporation’s efforts to rebrand a product that promoted narrow concepts of beauty and what women could do, to bolster its profits, be considered a feminist act? Are Muslim women in such desperate need to be acknowledged as strong and beautiful that they must clamour to congratulate Mattel? Like whether or not to wear the hijab, it is a question every woman must answer for herself.