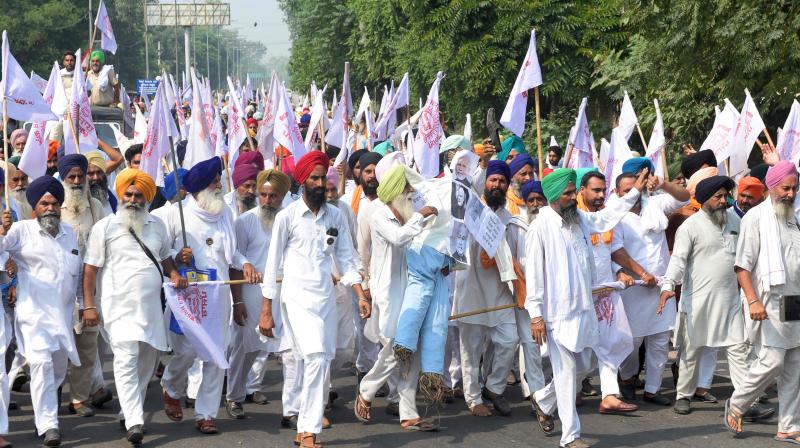 Farmers shout slogans as they march to protest against the Union government's agriculture reforms in Amritsar. (AFP)

Rajya Sabha chairman M Venkaiah Naidu and Lok Sabha speaker Om Birla worked diligently with Parliament staff to work out Covid-19 protocol-compliant arrangements for the monsoon session. Normally, it should have begun in the middle of July and wrapped up a little before Independence Day. But then these are not normal times: Covid-19 numbers have shot up from about 200,000 in June to more than 5 million in September. So, Venkaiah Naidu and Birla deserve praise for working out the logistics to hold the session between September 14 and October 1, inclusive of the weekends.

Doing away with Question Hour was sought to be justified on the grounds that officials could not be present to help the ministers answer the questions. In the hallowed House of Commons in Britain, the prime minister and all other ministers were left to fend for themselves when parrying questions from the opposition. But in India ministers cannot stand without the help of bureaucrats.

There was also a compulsion. The government had been working through the ordinance raj and it now had the perfect alibi to do so because of the raging pandemic. Finance minister Nirmala Sitharaman had explained the rationale of amending the law on GST payments on the dates specified and said that the need to defer the payments also meant changing the due dates specified in the law. The ordinance was inevitable and the bill to replace the ordinance was a necessity. But not all the bills arose out of the exigencies of running the government, and that is where the rub lies. This was a government business session, and that is why so many bills were pushed through in order to avert a governmental breakdown.

But there was a difference. Making his customary statement to the media -- where of course he does not take any questions -- prime minister Narendra Modi talked about the need for a robust discussion and the expression of diverse views as the flavour of democracy. But this time around he got plenty of it from a decimated but loud and assertive opposition, which pushed the government on to the backfoot as it were. The minister who held his own was Rajnath Singh, who made a comprehensive and clear statement on the India-China standoff in eastern Ladakh, and he included external affairs minister S Jaishankar’s meeting with Chinese foreign minister Wang Yi in Moscow on the sidelines of the Shanghai Cooperation Organisation (SCO), as also his own meeting with Chinese defence minister Wei Fenghe, and all this without taking vulgar potshots at Jawaharlal Nehru. He seems to have felt that on a matter of national importance, partisan grudges should be laid aside. The other person from the government who conveyed a sense of gravitas was health minister Harsh Vardhan.

But this spirit did not always hold. Finance minister Nirmala Sitharaman, instead of explaining the rationale of the PM Cares fund, indulged in a belligerent tirade on the amendments that the Manmohan Singh government brought in to deprive the states of the advantages of corporate social responsibility (CSR) contributions to chief ministers’ relief funds. And her junior colleague, Anurag Singh Thakur, did what most BJP members know how to -- mount an undignified personal attack on the Congress’ Nehru-Gandhi family. It put the Lok Sabha speaker in a tight spot, but the members of the Lower House from all sides expressed their confidence in his sense of fair play.

This did not work in the Rajya Sabha, when members clashed with deputy chairman Harivansh, who was re-elected to the post and prime minister Modi commended his ability to run the House, over putting two of the three agriculture reforms bills to vote. Trinamul Congress’ leader in the Upper House Derek O’Brien and several others rushed to the Well of the House and insisted that there should be a division instead of going by voice vote. O’Brien and the others were shown crowding around the seat of the presiding officer on the Rajya Sabha TV channel. Congress’ Rajiv Satav, among others, was said to have danced on the table of the House, where the House officials sit. This was as ugly as it could be.

Beyond the unjustifiable unruliness, unbecoming of the Upper House, there is the issue of procedure on one hand, and that of the intent of the legislation. Harivansh’s silence over whether he would have allowed for a division and electronic voting remains puzzling and law minister Ravi Shankar Prasad’s argument that the government had enough numbers to win the vote does not solve the puzzle. This also points to the other troubling factor that presiding officers, in their bid to improve the so-called “productivity” of the legislature, might be cutting into deliberations, even protracted ones, on many important matters.

The other aspect is that of the prime minister initiating reforms through ordinances. We know that the government finds itself beleaguered through no fault of its own -- Covid-19, the pre-Covid sluggish economy and the military standoff with China in Ladakh -- and it wants to be seen to be doing something positive. It has been the strategy of governments pushing necessarily unpopular reforms, from the days of P.V. Narasimha Rao, to push them through without too much discussion and to face pointed criticism from the Opposition. But unlike in the times of Narasimha Rao and Manmohan Singh, the BJP has sufficient strength in both Houses to push through any legislation.

There is no need for Modi and his Cabinet colleagues to fight shy of an open debate. But it seems that Modi seems to be realising that despite an unassailable parliamentary majority, unpopular measures do not go down well with the people. The farmers in Punjab and Haryana, rightly or mistakenly, are angry over the new farm legislation. The prime minister should have used the parliamentary debate to underscore its virtues. He did not. The entire effort to keep Parliament working in difficult times goes to waste when the national legislature fails to debate the burning issues. What is he really afraid of?