Europe story: Muslims are judged over a handshake

The case of Farah Alhajeh may seem like victory in the individual sense of receiving damages and being vindicated. 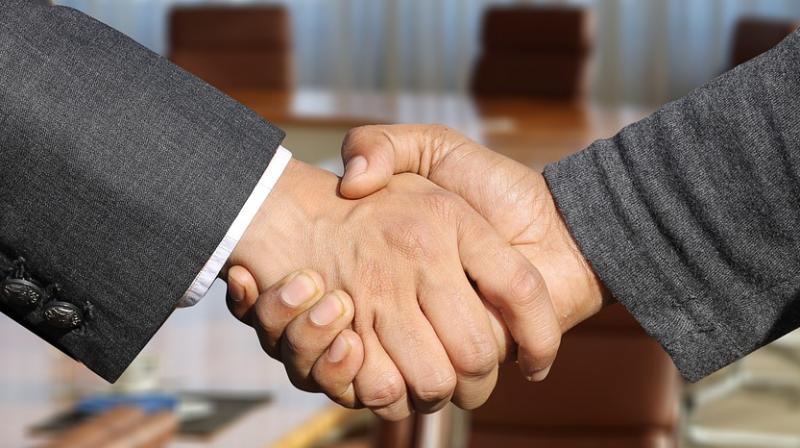 Victory is hard to define in contexts where even the handshake has been afforded such significance. (Photo: Pixabay)

To shake or not to shake hands has become a crucial question for Muslims in Europe. One of the controversies began in Stockholm several months ago. A 24-year-old girl named Farah Alhajeh went to the office of a Swedish company called Semantex to interview for a job. She had applied to be an interpreter for the company whose headquarters are located in Uppsala, a town outside of Sweden. When she arrived, a male interviewer was waiting to interview her. Instead of shaking his outstretched hand, Alhajeh touched her hand to her heart and stated that she did not shake hands with men or women.

What happened next shocked her. Instead of being seated for an interview as she expected, she was asked to leave and shown the way to the lift. In an interview given to the media, she described being completely astounded. Nothing like this had ever happened to her before. She was not about to just let it happen, however. Instead of forgetting about the incident, as some would have, Alhajeh filed a complaint with Sweden’s equality ombudsman, saying that she had been discriminated against owing to her religious beliefs. In turn, the company responded that they were protecting gender equality and that Alhajeh’s decision not to shake hands went against the company’s policy of treating men and women equally.

In front of the court, Alhajeh insisted that she did not shake hands with either men or women, hence treating both genders equally and not violating any company policy. Her attorney argued that Article 9 of the European Charter of Human Rights protected her behaviour. Semantex argued that hiring Alhajeh would have meant compromising their principles of gender equality and would have created awkward situations when Alhajeh was called to greet subjects for whom she was interpreting. In a three-two decision, the labour court came out in favour of Alhajeh, saying that they had tried to balance principles of gender equality against the individual’s right to religious freedom. They decided that Alhajeh had the right to offer a greeting of her choice and one that comported with her religious beliefs. They ordered Semantex to pay approximately £3,500 in damages to her.

But while Muslims in Sweden may be rejoicing over the decision, the prospects for no-handshake Muslims are not looking quite so good in Switzerland. The country’s somewhat odd immigration rules require the town councils or cantons to vote on whether or not citizenship should be awarded to immigrants. So it is in the small city of Lausanne, where a Muslim couple case came up for consideration. In the interview the couple refused to shake hands with the opposite sex. The canton voted to reject their application for citizenship because they felt that their views revealed an inability to integrate into Swiss society. They would never become Swiss citizens because they did not want to shake hands with the opposite gender.

Neither of these cases is new; in previous instances even applicants who refused to shake hands at citizenship ceremonies have been excluded from citizenship.

Victory is hard to define in contexts where even the handshake has been afforded such significance. The case of Farah Alhajeh may seem like victory in the individual sense of receiving damages and being vindicated. In the collective sense, where the Swedish Muslim community as a whole is considered, the very existence of the case signifies just how wary employers have become of hiring Muslims. The Swiss case reveals what many Swedish people would also have done — if they only could.

The question for European Muslims then is not whether one should or should not shake hands but rather how and what strategies for survival must be deployed in a Europe that is so very wary if not outright inimical to Muslims. Headscarves may be permitted in some places and handshakes considered unnecessary in others but what they connote is the refusal to accept Muslims on their own terms.

In a world where lines have been drawn and walls erected, where coexistence seems like a foolish dream and each side wants its dominance in one or another territory to be visible and clear, a handshake may no longer be a handshake. In purely legal terms, the refusal to shake hands may be deemed permissible; in cultural terms it labels Muslims as targets whose stubborn desire to remain different, makes then undesirable as neighbours and employees.

Next time, employers like Semantex may note the refusal, continue with the interview and then offer a different reason for not offering the applicant a job. Farah may have won her individual case against the company, but Swedish Muslims or rather all Muslims who live as minorities in Western countries may have lost, their fates closer to the couple denied citizenship in Lausanne. The premise that they can never fit into Western society, never be a good member of society or the workforce, share a commitment to gender equality, has in the view of their Western neighbours, pushed a bit closer to being a truth, the truth. In this world where Muslims are watched and judged, a handshake is no longer just a handshake.