J&K - The tragedy just does not end

The purported purpose of the alliance was to seek a national reconciliation on J&K. 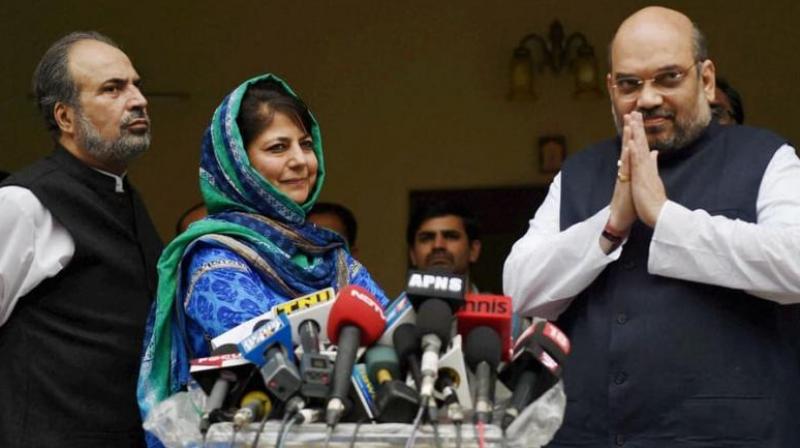 The BJP finally pulled the plug on its coalition government with the PDP in Jammu and Kashmir. The seeds of this disastrous coalition were embedded in the commitments made by the BJP in the agenda of governance signed between the two parties on March 1, 2015. The purported purpose of the alliance was to seek a national reconciliation on J&K. The recital of the agreement stated: “The purpose of this alliance is to form a coalition government that will be empowered to catalyse reconciliation and confidence building within and across the Line of Control (LoC) in J&K thereby ensuring peace in the state… While recognising the different positions and appreciating the perceptions the BJP and PDP have on the constitutional status of J&K considering the political and legislative realities, the present position will be maintained on all the constitutional provisions pertaining to J&K, including the special status in the Constitution of India.” This was the soul of the agreement that the government was being formed to energise the process of healing and understanding both within the state and across the border with Pakistan. It may be worth noting that this agreement was signed nine months after the November 2003 ceasefire had effectively broken down and unprecedented border shelling had commenced from both sides in September 2014.

The heart of the alliance lay in the grand bargain between the two on political initiatives, security matters and humanitarian measures. It would be worth reproducing the relevant sections of the said document. “The Union government has recently initiated several steps to normalise the relationship with Pakistan… The same will be pursued by taking confidence building measures such as, enhancing people to people contact on both sides of the LoC encouraging civil society exchanges, taking travel, commerce, trade and business across the LoC to the next level and opening new routes across all three regions to enhancing connectivity. The earlier NDA government led by Atal Behari Vajpayee had initiated a dialogue process with all political groups, including the Hurriyat Conference, in the spirit of ‘Insaniyat, Kashmiriyat aur Jamhooriyat’. Following the same principles, the coalition government will facilitate and help initiate a sustained and meaningful dialogue with all internal stakeholders, which will include all political groups irrespective of their ideological views and predilections. This dialogue will seek to build a broad-based consensus on resolution of all outstanding issues of J&K.”

On security matters the document stated: “While both parties have historically held a different view on the Armed Forces (Special Powers) Act (AFSPA) and the need for it in the state at present, as part of the agenda for governance of this alliance, the coalition government will examine the need for de-notifying ‘disturbed areas’. This, as a consequence, would enable the Union government to take a final view on the continuation of AFSPA in these areas.” On humanitarian measures it articulated: “Protecting and fostering ethnic and religious diversity by ensuring the return of Kashmiri Pandits with dignity based on their rights as state subjects and reintegrating as well as absorbing them in the Kashmiri milieu. Reintegration will be a process that will start within the state as well as the civil society, by taking the community into confidence.” Every word of that agreement, including the above, remained a dead letter from the day Mufti Muhammad Sayeed was sworn in as chief minister and till this farce ended a few days ago.

Were there moments in the last three decades since this vicious cycle of violence and death began when there appeared to be a light at the end of this dark black tunnel? The answer is yes. The first opportunity manifested itself in September 1996 when Farooq Abdullah became chief minister after six years of Governor’s/President’s Rule. Building on this restoration of democracy in J&K Prime Minister Atal Behari Vajpayee took a bus to Lahore on February 20, 1999. The Pakistani deep state returned the visit with the Kargil incursion in May 1999.

The second moment came in July 2001 when despite Kargil in 1999  Mr Vajpayee invited the newly-minted President Pervez Musharraf to Agra. The summit collapsed both because of BJP hawks and Mr Musharraf’s indiscretion.  Mr Musharraf though has in public and private interactions blamed an influential Indian minister, an Indian official and a prominent Indian media house for subverting the summit.

The third moment came in April 2003 when Mr Vajpayee, despite the Parliament attack and Operation Parakram extended a hand of friendship again both to Pakistan and the Hurriyat. He told Parliament: “I assured the people of J&K that we wish to resolve all issues both domestic and external through talks. I stressed that the gun can solve no problem; brotherhood can. Issues can be resolved if we move forward guided by the three principles of Insaniyat (humanism), Kashmiriyat and Jamhooriyat (democracy).” After Abdul Ghani Lone’s assassination in May 2002 the Indian security establishment had concluded that only a concurrent dialogue with both Pakistan and Hurriyat could bear any fruit. Mr Vajpayee followed this overture up with a visit to Islamabad in January 2004. The fourth moment came when the Manmohan-Musharraf talks on a borderless Kashmir almost came to fruition till India pulled back in 2007 after the lawyers’ strike in Pakistan based on the assessment that Mr Musharraf had lost the political capital to sell the “agreement” to his people. That was the last clutch at the elusive straw.

It is therefore quite evident that hard power cannot be the solution to the Kashmir imbroglio. At best you can hold territory not win the hearts and minds of the people. Then what is the BJP’s latest gambit all about? It has three elements: villainise Kashmir to polarise the rest of India, use the internal dynamics to heat up the Line of Control/International Border/Actual Ground Position Line, hope that an inverted Kargil-like situation may manifest that would allow them to ride a wave of hyper-nationalism in the 2019 general elections. The dogs of war are effectively out of their kennels.