It ain’t good to plead UK for jobs, Mr PM

Ms May’s government speaks in so many voices that everyone is confused. Perhaps this is intentional. 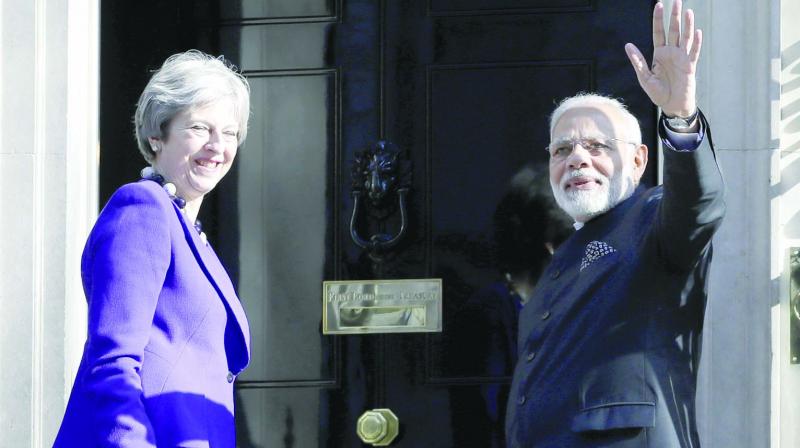 Prime Minister Narendra Modi was still in London when British Prime Minister Theresa May gave what is described as “a secret intelligence briefing” to the Prime Ministers of Australia, Canada and New Zealand, the only countries left in the Commonwealth that can still be called white, at the National Cyber Security Centre.

One understandable reason for excluding the Indian PM from this highly sensitive event could have been Mr Modi’s refusal to explicitly blame Russia for using chemical weapons in Syria and Salisbury, as the three Caucasian premiers did with Cold War gusto. Another could be the insistence on more work visas for Indians. Ms May must resent the attempt to burden her with the problem of people whom India educates but can’t find jobs for.

The over-arching reason is that despite gullible Indians imagining the Prime Minister was treated to special privileges during the recent Commonwealth summit, he is not family for her the way Malcolm Turnbull, Justin Trudeau and Jacinda Ardern (leaders of Australia, Canada and New Zealand respectively) are.

Ms May’s ideal would probably be the plan for a two-tier Commonwealth attributed to Sir Robert Menzies, Australian Prime Minister from 1939 to 1941 and 1949 to 1966, and the last defender of the “White Australia” policy. According to Menzies the real Commonwealth would be an inner group of White dominions. In those days that meant not only Australia, Canada and New Zealand, but also South Africa and the two Rhodesias.

Ms May seems to go through the motions of universalism pleasantly enough. She wouldn’t quarrel with the lead editorial in the Times which urged her last week to woo India to buy the British goods that can’t be exported to the European Union after the divorce.

On the eve of the summit she apologised to Caribbean politicians (whom she had earlier refused to meet) for her government’s monstrous treatment of the children of West Indians who were welcomed in 1948 when Britain was desperately short of manpower.

A cartoon in the rival Daily Telegraph showed her saying “Stay as long as you like” to an assembly of Africans, Asians and West Indians, while the prompter on the lectern before her read “Now Clear Out”. It appeared on the 92nd birthday of Queen Elizabeth who has never been accused of the slightest whiff of racism. Robust turban-wearing Indian dancers performed at Her Majesty’s birthday party at the Royal Albert Hall, reminding watchers of Boris Johnson’s acid comment that the Queen loves nothing better than “cheering crowds of flag- waving piccaninnies.”

One interpretation of the Telegraph cartoon could be the muted tussle between migrants from the EU and the Commonwealth. Ms May has reiterated that the Conservatives have not changed their target of cutting the number of immigrants to less than one lakh a year by 2022. What no one knows for sure is whether this will mean slashing the EU or Commonwealth quota.

Ms May’s government speaks in so many voices that everyone is confused. Perhaps this is intentional. Both Michael Gove and Priti Patel, present and former members of her government, have hinted immigrants from the Commonwealth will be given priority. But the minister in charge of exiting the EU, David Davis, seems to want exactly the opposite. Employers are assured they needn’t worry about the prospect of losing European plumbers, electricians, handymen and other workers. Bangladeshi restaurant owners were similarly given to understand that immigration curbs would not starve the curry industry of skilled chefs from the subcontinent. Uncertainty threatens to continue till the end of the year for that is when home minister Amber Rudd has promised a white paper on the government’s immigration policy.

Confusion— Dissimulation? — has a long lineage. The 1948 West Indians came on the back of the British Nationality Act 1948 which conferred United Kingdom citizenship on colonial subjects. Then came the 1961 immigration law which was colour blind in its wording but was “intended to operate on coloured people almost exclusively”, according to R.A. Butler, whom some called the best Prime Minister Britain never had. The so-called “working holidaymaker rules” Edward Heath introduced in 1973 benefited “mostly those who are White members of the Commonwealth, from Australia, Canada and New Zealand”. The Labour Opposition at the time denounced the rules as “cruel and brutal anti-colour legislation”.

Ms May’s avowed aim in 2012, when she was home minister, of “creating a really hostile environment for illegal migration” inevitably ensured the atmosphere was “really hostile” for all Afro-Asian-Caribbean visitors. It still is. It often seems as if immigration officials are specially instructed to be unpleasant to all Asians and Africans. Even some White EU citizens find the environment hostile.

The Commonwealth caravan was packing its tents when the 1959 star-studded film version of John Osborne’s Look Back in Anger was screened on British TV.

Since India was a living reality for the English in 1956 when Osborne wrote the play, some of the references are not at all surprising. The Indian stall-holder Kapoor (played by S.P. Kapoor), for instance, says he believes in justice but doesn’t expect it for himself. When Jimmy Porter (Richard Burton) asks why he came to Britain to be insulted and humiliated, Kapoor replies simply that as an “Untouchable”, he was beyond the pale in India.

Some might object Kapoor doesn’t sound like a dalit name. Others will claim that Indian conditions have changed since Osborne wrote the play. But the fundamentals remain unchanged. If Ms May is guilty of duplicity over Afro-Asian immigrants, Mr Modi is guilty of exposing his people to her wiles. Someone should advise him it’s demeaning for India’s Prime Minister to plead cap-in-hand with his British colleague for jobs for Indians whom India can’t feed.