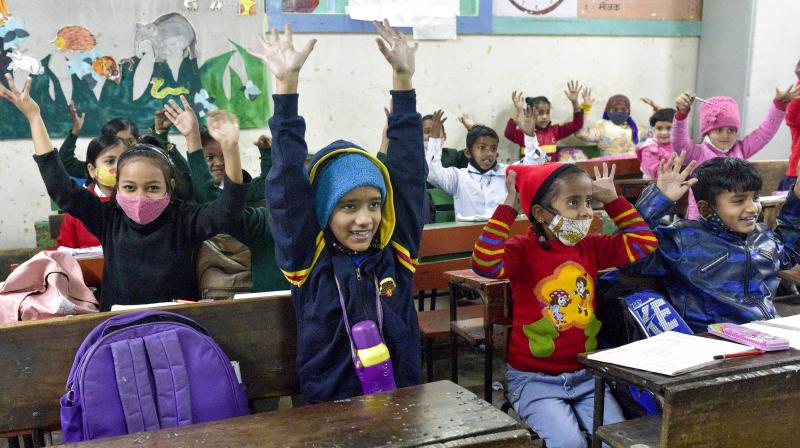 Since the immediate threat of large scale drop-outs has been avoided, governments across India now need to focus on the medium-term and long-term prospects of the education system. (Representational Image/ PTI)

The Covid-19 pandemic has caused an unprecedented shift in enrolment from private schools to government schools all across India. The phone-based Annual Status of Education Report (ASER) 2021 shows a six percentage-point rise in government school enrolment between 2018 and 2021. The field-based ASER surveys in Karnataka (2020), Chhattisgarh (2021) and West Bengal (2021) show a similar pattern. This goes against the widespread expectation of large dropouts during the pandemic. Rural government school teachers surveyed in the ASER 2021 report showed that the most prevalent driver of the shift from private to government schools was the financial distress faced by many families due to Covid-19.

This shift was also possible because India already has provisions for free government-funded education in place, since almost every village in the country has at least one government primary school. Though this is a great opportunity for the government to effectively regulate and ensure better learning for more children, it also highlights diverse capacity constraints.

One example is the Pupil-Teacher Ratio (PTR) which reflects the average number of pupils per teacher in schools. PTR was observed to rise during the global financial crisis of 2008 even in countries like the United States, where the government has a much higher spending power than the Indian government. This happened because while public school enrolment rose, state funding for education was reduced due to falling tax collections. In order to avoid making the same mistake over here, it is important to take stock of the rise in enrolment and avoid cutting down on medium-term and long-term investments on teachers and school infrastructure.

The priority during a crisis like this should be to ensure that children do not drop out of the education system. Since the current school enrolment trends in India look promising in this respect, the next step would be to ensure that they remain in school. When Indonesia faced an economic crisis in the mid-1980s, the worst effects on enrolment showed two years later because of a fall in public investment in education along with a rise in fees charged by private schools that were trying to recover their own losses. This could also play out in India, where instead of ramping up investment in public education, the Union Budget for the financial year 2021-22 slashed the proposed education spending by six per cent. However, the allocation was increased by nearly 12 per cent this year, which could be a step in the right direction.

Assuming that we have not yet seen the last of the Covid-19 pandemic, another important factor that could discourage students from continuing in school could be learning losses due to the frequent disruptions. Hybrid learning models are a way to ensure that learning continues even outside the classroom. A World Bank Group report studied the remote learning methods adopted worldwide to come up with four broad hybrid strategies that combine in-person learning with different remote learning methods, two of which are scalable in the context of rural India.

The first involves the use of paper (take-home packages, worksheets), as well as radio and TV lessons to supplement in-person learning. The second adds mobile follow-up to the previous one to ensure better two-way interactions.

Both these methods have been tried in different parts of India in several different ways. According to the national ASER 2020 phone-based survey conducted six months after the schools closed, more than two-thirds of children in government schools had received learning materials through WhatsApp in the previous week. Teachers also did home visits, and the government ran several educational broadcasts on All India Radio and Doordarshan to facilitate learning at home. Many states implemented their own special programmes as well. For example, the

Chhattisgarh government came up with the “Padhai Tunhar Dwar” campaign, which included lectures through a mobile application for children in areas with good connectivity, as well as community classes or “mohalla classes” conducted by school teachers in open spaces within the village for children who did not have access to technology. Under their “Bultu ke bol” programme, teachers transferred audio lectures to children using Bluetooth if they did not have smartphones or access to the Internet.

However, it should be noted that despite remote learning interventions, children might still suffer learning losses in the absence of regular in-person classes. This is especially true for the youngest learners in lower primary classes. Learning levels in Chhattisgarh, for example, dropped significantly over the past couple of years despite the government interventions mentioned above. According to ASER’s Chhattisgarh 2021 field survey, the proportion of children in Class 3 who couldn’t recognise letters in Hindi more than doubled from 10 per cent in 2018 to 23 per cent in 2021. Similar drops were observed in the ASER Karnataka (2020) and West Bengal (2021) surveys as well. This indicates a strong need for schools to go back to the basics and focus on strengthening children’s foundational learning instead of chasing the syllabus.

Besides that, remote learning efforts need to be consistent to ensure continued learning despite school closures that might be inevitable at certain times.

Since the immediate threat of large scale drop-outs has been avoided, governments across India now need to focus on the medium-term and long-term prospects of the education system. Besides ensuring that children get as much classroom time as possible, it is important to work towards institutionalising delivery mechanisms and teaching-learning pedagogies involving a hybrid model that aims for the mitigation of learning loss and the undisrupted delivery of education.