Coronavirus has a message for us humans

This calamity is imploring us to regain our humanity, with intelligence and benevolence 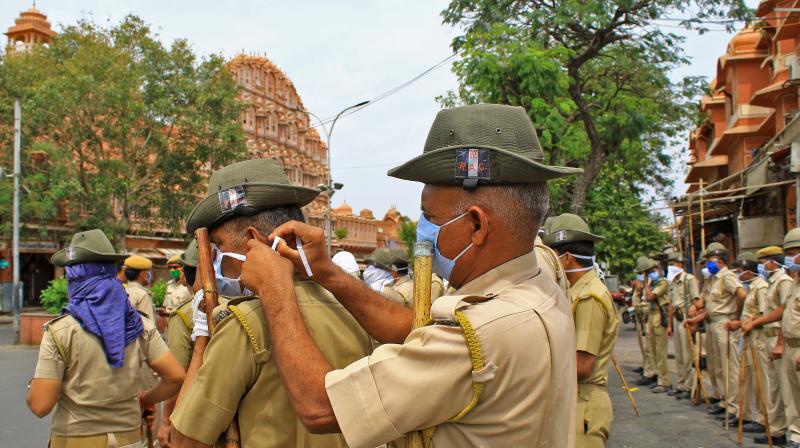 Police personnel mask up while preparing for a drill during the coronavirus lockdown in Jaipur on March 24, 2020. (PTI)

It unfolded like a Hollywood planet-scale doomsday thriller; scripted and shot, scene by scene, by a dexterous director on an opus, irresistibly engaging an entire planet. Its saga grew in a phantasmagorical sweep across nations and continents, bringing down societies on to their knees, relegating every other human preoccupation to insignificance, threatening to destroy everyone who gets touched, heading towards a chilling climax of who-knows-what Armageddon-scale destruction.

Born in Wuhan, a commercial city in China centrally-located Hubei province, of a population of over 110 million people, made picturesque with two rivers and many a lake, the novel coronavirus spread faster than a titillating untruth, a contumelious political slur or a shocking visual with such explicit sexual or violent import that it became impossible for our vicarious souls to not push forward with glee for the benefit of rest of everyone.

In all of a few weeks, a pre-COVID-19 world is already a blurring memory; when we were a different planet, a different people. A time when none listed hand-sanitizers or masks as precious items to hoard, when we did not engage in supermarket brawls for tissue paper or soap, where the significance of washing hands with soap was not taught on videos to be watched by hundreds of millions, when people staying indoors was not the most dominating motif of news, when we shook hands carefree, when our halcyon was not shattered by the frightening sound of another person’s cough or sneeze.

The hubris of power of sovereign nations with nuclear weapons crumbled, unimaginable power of the mighty fell apart, too quickly to comprehend. Borders are closing, markets are tumbling; even the gods amongst humans–rulers, monarchs, dictators, religious heads, military generals, billionaires, movie stars, icons of sports and music–have been brought down, and sequestered, forced to recede from limelight, hold back on their propensity to perform, no longer in control, sitting back in surrender to an unseen, tiny speck of a virus with an insatiable and unquenchable appetite of a super serial killer, out to snarf and devour an esculent mankind, bit by bit, part by part.

The sacred gods we humans created throughout our history in our own image too joined scared commoners as humbled places of worship shut down, not unlike other mundane entities transacting in material pettiness. Airlines, train stations and bus bays resembled death, without movement. Busy streets of overcrowded cities become eerily silent, abandoned.

Covid-19 is not just the biggest story of our age; it is so mammoth that is the only story. It is a tunnel, whose end is far, far away.

Of course, there are flashes of hope and positivity. New heroes have emerged, professionals hitherto taken for granted–doctors, nurses, hygiene and health workers, scientists, viralogists, are fighting to save mankind, a patient a time, at crumbling battle-fatigued healthcare centres.

Amidst a piercing cacophony of enforced caller-tunes with public interest advisories and shrill hollering of public panic, we cannot afford to miss the soft whisper of a message this troublemaker of a virus has for us. This lookalike of a tennis ball with mushroom-like tentacles, visible only when magnified astronomically, has something to tell us. Its message not unlike Shelley’s Ozymandias in its theme.

To our fears– real or imagined–which till recently were radically different, it speaks mockingly. It questions our wisdom in placing scores of different sub-identities over our primary one; fear me, this puny powerful super-virus warns, realise you are first, foremost, and perhaps only, a human being.

Churchill must impatiently wishing to break out free from his grave to tell us – don’t waste a good global crisis. Nothing unites two warring factions as a common enemy. Coronavirus can be that common enemy, powerful enough to unite mankind’s every two sets of antagonists, every two factions forever at war.

Covid, in its sweeping trail of destruction and anguish, is soliciting us– harness my power to cause dread in each one of you, across borders, across genders, across races–and unite. Find common cause against me. Even when the best amongst you rise to find an antidote against me, let my recall be a glue for you to come together, even if right now I have forced you to stay at a safe distance.

Yes, as masters of our planetary fate, we fostered divides. Men versus women. Indian versus Pakistani. Hindu versus Muslim, Sikh versus Christian. Religious versus agnostic.

We were forced into choosing one to exclude another. Black, brown or white. Heterosexual or homosexual. Conservative or liberal. Urban or rural. Each sub-identity might be crucial for comprehending human condition, or realising our fullest potential, but they never did matter so much as to ignore our principal truth, we homo sapiens are on a hostile, cosmic terra ferma.

Today, as we face an existential threat from a mortal molecular foe, wondering if might be the next victim, we must ask ourselves–how much of a male, Indian, Hindu, brown, heterosexual, urbane or conservative do you feel; or any other such permutation that applies to you.

We have run out of options but to reflect on viruses that infected us in the ‘Before-Covid’ era; hatred, lies, zeal to discriminate, oppress, unleash violence and justify it, and deny justice to another–based on differences of religion, caste, race–and judiciously review how important they seem now. Faced by a non-discriminating enemy which will kill everyone, no matter how you pray, what you eat, or what you believe; one touch and it gets you–all with equal precision.

We have to reflect on who our real heroes are and if we share their values. Scientists striving to find a cure for Covid, who uncompromisingly pursue absolute truth, whose labour of love soothes everyone, or those who divide us to a point where we stop being friends with those who vote differently.

Truth is, long before we were struck by Covid, we had fallen sick. We spread viruses; hate and lies, we held thoughts of hate for those who did not deserve it. We wallowed in bias and build echo chambers. The Covid virus exposed all the viruses.

Coronavirus will kill us for a while, but then in the end, we will win over it. But all human deaths before that happens would be in vain if we don’t realise, in a world of such threats, we never needed to have been each other’s mortal enemy.

In fear and panic, people resort to extreme behaviour, amazing us with their capacity for wisdom and kindness, or stupidity and cruelty. Coronavirus is imploring us to regain our humanity, marked with intelligence and benevolence. It is telling us to come together to fight different battles. It is forcing us to wash our hands of all sins of our past.

One day, soon, Covid vanquished, maybe we will come together, hands locked, our hearts together too, and evanescing hostilities helping us forge a world where no petty divide would matter.