Despite the Congress party’s poor bench strength, the veteran leader managed to get under the government’s skin on several occasions 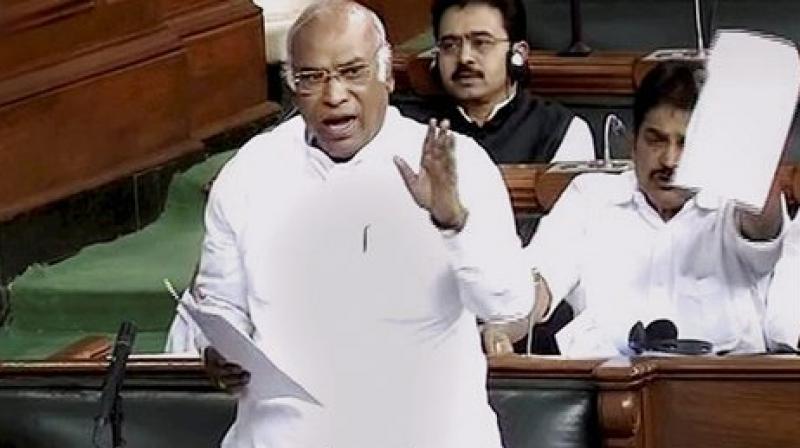 Senior Congress leader Ghulam Nabi Azad has been the leader of Opposition in the Rajya Sabha for over six years. This post will soon be falling vacant as Mr Azad’s term ends next month. The Budget Session of Parliament is barely a few days away but there’s no clarity about Mr Azad’s successor in the Upper House. From all accounts, the post would have gone to Anand Sharma who is the party’s deputy leader in the Upper House. However, Mr Sharma now has competition as veteran leader Mallikarjun Kharge, who was recently elected to the Rajya Sabha, is emerging as a serious contender. The Opposition leader’s post is critical as he or she leads the charge against the Treasury. Mr Kharge held the post in the Lok Sabha for five years (he moved to the Rajya Sabha after he failed to make it to the Lower House in the 2019 election) and despite the Congress party’s poor bench strength, the veteran leader from Karnataka managed to get under the government’s skin on several occasions. Though Mr Sharma has acquitted himself well in the Rajya Sabha, Mr Kharge’s seniority could well tilt the scales in his favour.

There is a strong buzz in the capital that Uttarakhand and Madhya Pradesh chief ministers Trivendra Singh Rawat and Shivraj Singh Chouhan may be shifted to Delhi when Prime Minister Narendra Modi reshuffles his Cabinet, which may now take place only after the West Bengal election. Mr Rawat has made himself unpopular with the people and party workers. Both complain that Mr Rawat has no presence and has failed to make any impact. Furthermore, he comes across as a poor second in comparison to his Uttar Pradesh counterpart Yogi Adityanath. Unlike Mr Rawat, Mr Chouhan’s popularity ratings remain high but the BJP leadership is unhappy at his acquiring a larger-than-life image. Mr Chouhan has become increasingly assertive and aggressive in his second term and this has not gone unnoticed by the leadership in Delhi. In fact, the party has been keen on promoting another leader in the state for some time but has not got an opportune moment to do so.

First, Congress insiders had a grouse that Nehru-Gandhi scion Rahul Gandhi was inaccessible to them and that his politically-inexperienced team members kept him from meeting party cadres. And now it is the same story with his sister Priyanka Gandhi Vadra, Congress general secretary in charge of Uttar Pradesh. When Priyanka joined politics two years ago, excited Congress cadres were confident that her entry would bring about a much-needed change in the party as she was reputed to be more open and connected well with workers. But, unfortunately for Congress members, it is as difficult to get an audience with Priyanka as it is with Rahul Gandhi. In Priyanka’s case, they blame Sandeep Singh, the main honcho in her office, for her inaccessibility. Unhappy Congress members maintain that Sandeep keeps a tight control on her appointments and is known to give preference to those who defer to him. There have been several instances when Sandeep has exchanged hot words with party leaders, the latest being Uttar Pradesh legislator Aradhana Mishra.

Ever since home minister Amit Shah visited the Delhi Police headquarters for a review meeting last week, speculation has been rife that the force will finally get a full-ledged commissioner. According to the grapevine, S.M. Sahai, a 1987 IPS officer, presently serving in the PMO, is the frontrunner for the post. The present incumbent, S.N. Shrivastava, was given additional charge as police commissioner after his predecessor Amulya Patnaik demitted office last March. An official order issued then had stated that Mr Shrivastava would hold this charge till further orders. He has since been continuing as an ad hoc police chief as his confirmation orders have yet to come. He is set to retire in June. This is perhaps the first time that the Delhi Police has been functioning with an acting chief commissioner for such a prolonged period.

When Arnab Goswami, Republic TV’s editor-in-chief and co-founder, was arrested by the Mumbai Police last year in an abetment to suicide case, the ruling BJP had gone all out to defend him. Union ministers and party spokespersons had lined up to attack the Maharashtra government for indulging in a witch hunt. Mr Goswami is currently embroiled in a fresh controversy over his long WhatsApp chats with the head of the Broadcast Audience Research Council revealing that he was fixing his channel’s TRPs. But, unlike the last time, no minister or BJP spokesperson has come to his rescue suggesting that the saffron party wishes to distance itself from its favourite news anchor. Maybe it has something to do with Mr Goswami flaunting his proximity to the government’s top bosses and how they were ready to hand down favours to him. Worse, he made fun of Prime Minister Narendra Modi’s poetry. Clearly, Mr Goswami’s benefactors have not taken kindly to his remarks.