Mr Shah would have had another term as president but for the fact that Mr Modi wanted him in the government. 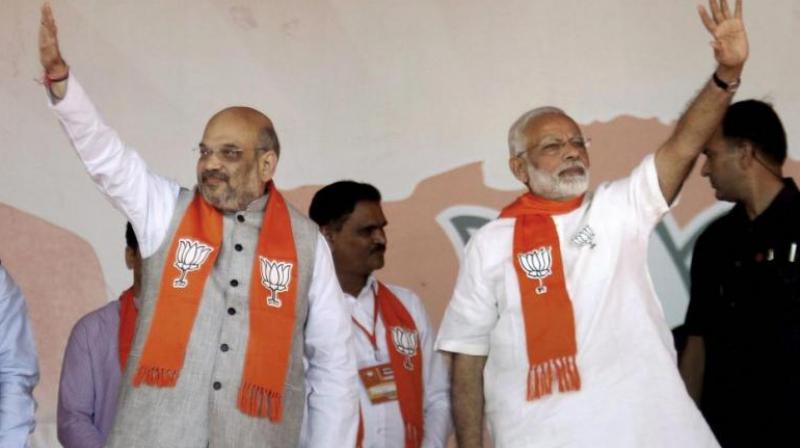 A coup of sorts was accomplished by Prime Minister Narendra Modi when he managed to get Amit Shah chosen as party president after he inducted Rajnath Singh, who was midway through his second presidential term, into the Cabinet.

The election of Jagat Prakash Nadda as the new president of the Bharatiya Janata Party (BJP) brings to light interesting aspects of the ruling party’s inner party dynamics. The presidential election is a culmination of the election of office-bearers at the district and state units, and the process is followed faithfully. We do not get a clear idea whether there are contests at these levels, or whether consensus is the mode at every level as it is for the president’s post.

Whatever the formalities of organisational elections, it is very clear that the process of choosing the party president does not follow the democratic norm of contest. The BJP president is hand-picked by the Central Parliamentary Board (CPB), the most powerful decision-making wing in the party. There is the unwritten convention that the person chosen to be president has to have the approval of the Rashtriya Swayamsevak Sangh (RSS), even though the BJP and the RSS pretend that they have nothing to do with each other. Many reports after Mr Nadda’s election mentioned as one of his qualifications that he is close to the RSS. No eyebrows are raised and no questions are asked about this prerequisite of the BJP president to have the acceptance of the RSS.

Former party president Nitin Gadkari was known to have been the blue-eyed boy of the RSS though he did not seem to have had great rapport with the senior members of the party — and the one time that the party bigwigs managed to edge him out and deny him a second term in 2013 on allegations of corruption in the companies owned by him.

A coup of sorts was accomplished by Prime Minister Narendra Modi when he managed to get Amit Shah chosen as party president after he inducted Rajnath Singh, who was midway through his second presidential term, into the Cabinet. All that Mr Modi needed to do was to get the CPB to approve the man he picked up, and he had no difficulty because of his unprecedented general election victory of 2014. Also, Mr Shah as the election in-charge of the key state of Uttar Pradesh got 73 of the 80 Lok Sabha seats. And for once, it was the choice of Mr Modi that seemed to matter than that of the RSS.

Mr Shah would have had another term as president but for the fact that Mr Modi wanted him in the government. His term got over in January, 2019 but due to the impending Lok Sabha election of May 2019, it was felt that he should continue to be at the helm in the party. It was also the case that the Modi-Shah duo had emerged as the winning pair. Mr Shah should have been replaced as party president soon after he became party president but it was not done. Mr Nadda was made the working president even as Mr Shah continued as president. It seemed to have been the calculation that Mr Shah should lead the party attack in the Assembly elections of Maharashtra, Haryana and Jharkhand. It was an “irregular” arrangement. Mr Modi and Mr Shah did not seem to know how to find a suitable replacement.

The choice of the party president was decided by Modi in 2014 and by Mr Modi and Mr Shah in 2019. The RSS is out of the frame at the moment. Mr Modi is at the centre of the party’s power dynamic. This is based on the principle that the winner calls the shots.

But the winning streak of Mr Modi seems to be thinning out with the setbacks in the Assembly elections of Maharashtra, Haryana and Jharkhand, with the explosion of protests against the Citizenship Amendment Act, the glum economic situation and the sullen situation in the Union territory of Jammu and Kashmir, the party is standing with its back to the wall. With Mr Shah seen as the architect of the Kashmir move, the CAA and as the mastermind of the party campaign in the three state Assembly elections, he does not appear to be as sure-footed and as invincible as he was between 2014 and 2019.

It might be the case that the RSS is biding its time and it will intervene in party affairs when the going gets tough for the BJP. Mr Nadda has the unenviable task of steering the party in inclement and he might to have to bear the brunt of the party’s growing unpopularity. And he may have to choose between being guided by Mr Modi and Mr Shah or by the invisible hand of the RSS during his term. As of now, Mr Nadda is not a leader in his own right. He can make himself into one if he chooses to be.

What is certain is that the days of complacency for the BJP and the Narendra Modi government are at an end. Mr Modi may have to focus more on governance and turn away from party affairs. Mr Shah might find it difficult to manage the party now that he has formally handed over the reins to Mr Nadda. It is a challenging time for Mr Modi, Mr Shah, Mr Nadda and for the RSS.