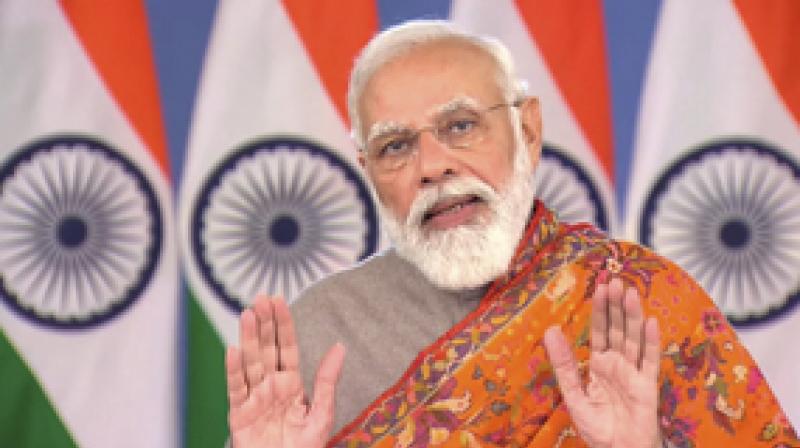 However casual and cavalier it may have sounded, Mr Modi’s November 19 address could mark a new beginning. (PTI)

Prime Minister Narendra Modi didn’t know of course but he had the examples of two other Prime Ministers to choose from. In 1980, Lee Kuan Yew had crushed a Singapore Airlines pilots’ strike that, he said, had cost “millions of dollars’ worth of advertisements and sales within a matter of two weeks”. More than 200 years earlier, England’s Robert Walpole, reckoned to be history’s very first Prime Minister, abandoned a highly unpopular excise bill that provoked riotous protests throughout Britain with the famous words: “This dance it will no further go”.

There are other dances, too, that will no further go, and that demand the Prime Minister’s sober reconsideration in the light of objective reality rather than religious passion. One doesn’t know why Mr Modi followed Walpole and not Lee over the three contentious agricultural reform laws whose repeal has now been promised but the decision could not be more welcome. Some would have thought from observing his governmental style from outside that he would heartily have agreed with Lee’s stern dictum that whoever governs “must have that iron in him” because government “is not a game of cards”. He could also have argued with some justification that an objective assessment of the three controversial laws shows that they are not inherently so repugnant after all. While the farmers understandably yearn for a guaranteed minimum support price, an efficiently streamlined marketing machinery with global reach is as necessary to modernise Indian agriculture and enhance profits and productivity as scientific cultivation, quality seeds and mechanised methods.

True, the manner in which the three laws were hustled through the two Houses of Parliament suggested little respect for parliamentary niceties. But then the National Democratic Alliance government has never shown much regard for democratic propriety. Agriculture is supposed to be a state subject but we have seen time and again how the state legislatures blindly rubber stamp the Centre’s diktat even over the choice of a chief minister. As for the charge that powerful businessmen like the Ambanis or the Adanis are all set to capture the storing, transport and marketing of farm produce, no law on earth can guarantee against the crony capitalism, nepotism and profiteering that seem ingrained in the Indian psyche. One can only cite the immortal Kautilya: “Just as it is impossible not to taste honey or poison that one may find at the tip of one’s tongue, so it is impossible for one dealing with government funds not to taste, at least a little bit, of the King’s wealth”. If one-time deputy prime minister Devi Lal did not actually retort “If I don’t promote my son, whose son should I promote? Yours?”, he might well have done. The remark would not have contradicted the reality of Indian public life. The point is that it is not the letter of the law that matters so much as how the law is really implemented.

That also applies to the Citizenship Amendment Act, or CAA, that was enacted on December 12, 2019 in order to guarantee fast track citizenship to Hindu, Sikh, Jain, Parsi, Buddhist, and Christian illegal migrants from Afghanistan, Bangladesh and Pakistan who entered India before 2014. It had provoked a storm of controversy as the exclusion of Muslims from that list of religions feeds into the popular narrative of a government and a political establishment committed to the ultimate goal of Hindutva. It needs to be explained clearly and convincingly that given the basis of India’s Partition in 1947 and the dwindling since then of East Bengal’s Hindu population from 28 per cent of the total to a mere eight per cent makes the need for protection obvious. It is beyond any Indian government’s ability to ensure justice for Bangladesh’s beleaguered Hindus in their homeland, as the Bharatiya Janata Party’s stormy petrel, Subramaniam Swamy, demands. But India can and must demonstrate — without damage to its secular credentials — that it is prepared to extend such protection as is possible without impinging on Bangladeshi sovereignty. After all, where else can persecuted Hindus seek refuge if not in the India from which Mohammed Ali Jinnah’s Muslim homeland seceded?

A convincing display of even-handed treatment ranging from not ungraciously rejecting the courtesy offering of a Muslim’s cap and scarf to a realistic reappraisal of the now abrogated Articles 370 and 35A of the Constitution can only affirm the confidence with which a legitimately elected government is prepared to work within the parameters of the law under which it was elected.

Speaking legalistically, the high court of Jammu and Kashmir had ruled that Article 370 “cannot be abrogated, repealed or even amended.” Article 35A, which empowers the Jammu and Kashmir state legislature to define “permanent residents” and provide special rights and privileges for them, stems from Article 370. Very few claim that these provisions cannot ever be deleted, but most agree that the deletion must be lawful. That means a Presidential Order preceded by the concurrence of the Jammu and Kashmir Constituent Assembly. Since the Assembly was dissolved on January 26, 1957, it can be argued that its authority has devolved on the state Assembly which alone could have authorised the announcement that home minister Amit Shah made on August 5, 2019.

But we are not talking of legality but of practical governance. From that point of view, the authorities can hardly claim — as some BJP stalwarts have done — that New Delhi’s action has led to a decrease of violence. Or that it has filled the majority community in Kashmir with delight. India can afford to brush aside comments by Turkey’s President Recep Tayyip Erdogan on Kashmir in the context of the plight of Myanmar’s Rohingya community and the Uighurs in China’s Xinjiang province. But no government in New Delhi can be similarly indifferent to the views of more than 213 million Indians who happen to profess the Islamic faith and who comprise, according to the Pew Research Centre, 15.4 per cent of the country’s population.

As with the three farm laws, the authorities have demonstrated a new flexibility over the bodies and burials of Kashmiris killed in police action. It’s a small beginning that need not remain small. The diversity that should be India’s strength has much to gain from a process of truth and reconciliation. However casual and cavalier it may have sounded, Mr Modi’s November 19 address could mark a new beginning.