Anita Anand
The writer is a development and communications consultant and the author of Kabul Blogs: My Days in the Life of Afghanistan

In democracies, civil society holds up a mirror to government, acting as a watchdog, representing the interests of people 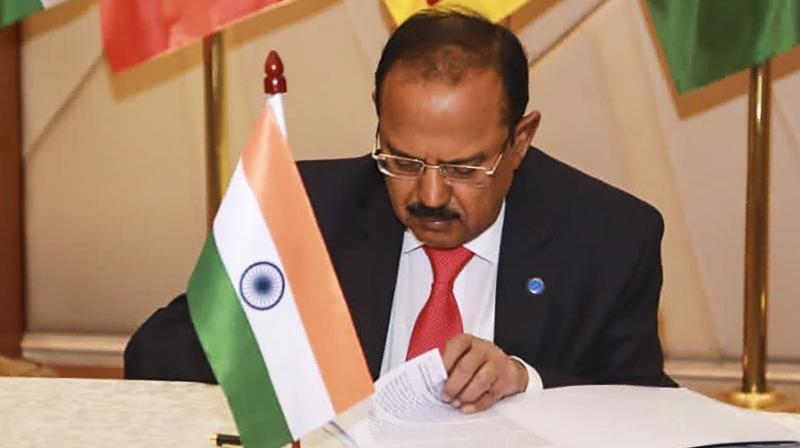 Seeing social movements as a group that 'war' must be waged against is a preposterous suggestion by Mr Doval. (PTI)

On November 13, national security adviser Ajit Doval, addressing the passing out parade at the Hyderabad-based Sardar Vallabhbhai Patel National Police Academy, said civil society was the new frontier of war or fourth-generation warfare (4GW), and it was the responsibility of the police to protect people from being subverted, divided and manipulated.

“It is the civil society that can be subverted… that can be divided, that can be manipulated to hurt the interests of a nation. You are there to see that they stand fully protected.”

What exactly is civil society? A report of the World Economic Forum of 2013 entitled “The Future Role of Civil Society” states: “NGOs, labour leaders, faith-based organisations, religious leaders and other civil society representatives play a critical and diverse set of roles in societal development. In the last two decades these roles have shifted as the external environment for civil society has changed.”

The report lists civil society organisation (CSO) activities to demonstrate why governments frequently seem to court them in one breath and malign them in another. These include holding institutions to account and promoting transparency; raising awareness of societal issues; delivering services to meet education, health, food, and security needs; implementing disaster management, preparedness, and emergency response; bringing expert knowledge and experience to shape policy and strategy; giving power to the marginalised; and encouraging citizens’ engagement.

I became a civil society professional without knowing it. In 1970, I joined Kishore Bharati, a rural development project in Madhya Pradesh, an experiment to make science relevant to rural students’ lives. The Science Teaching Programme, as it came to be called, was a partnership with the Tata Institute of Fundamental Research (TIFR), Delhi University and the Madhya Pradesh government. A truly collaborative experiment. For me, Kishore Bharati and similar projects were about doing what the government was not doing or could not do. Since the 1970s, Non-Governmental Organisations (NGOs) have emerged to conduct activities outside the mainstream. Many, like Kishore Bharati, have initiated projects to help children, women, farmers, the elderly, differently abled, as these needs were identified.

As the decades progressed, the name civil society began to be used for NGOs. India, a United Nations member nation, participated in global debates and dialogues on human rights, peace, the environment, children, minority, and women’s rights etc. Indian CSOs were a part of the global community of CSOs, active and present, in the UN forums.

In India, issues of development and displacement go side by side. As a nation state riddled with issues of caste, religion, and class, it is a challenge for the government to balance the needs of all its people, especially those at the bottom of the economic ladder. Poverty alleviation strategies have been implemented through government schemes and reservations or a quota system.

Governments do not take kindly to CSOs, unless they are of use to them. In recent years, Indian CSOs have worked closely with state governments and done pioneering work. During the term of Congress governments in the past, prominent CSO leaders have served on government planning and policy making bodies. Social activists such as Arvind Kejriwal have moved into politics at centre-stage and many student activists have joined political parties.

The present government sees CSOs -- that protest and organise against policies that further divide society or harmful development practices that degrade people, livelihoods, and the environment -- as dangerous as evident from Mr Doval’s statement. Seeing CSOs and their members as a threat to law and order takes paranoia to a new level.

However, the present government has its own “civil society”. This is the RSS cadre of workers, upper caste males and a women’s wing with approximately five million active members and nearly 50,000 shakhas or grassroot groups. Founded in 1925 to preserve and promote Hinduism, the shakhas work at the community level in slums, helping the poor and marginalised. Its these grassroots workers that brought the present government to power.

In democracies, civil society holds up a mirror to government, acting as a watchdog, representing the interests of people who cannot speak for themselves. The ideology of the BJP does not allow for this kind of interaction. A hierarchal and patriarchal party born out of the desire to promote Hinduism, it cannot comprehend the role of civil society, outside party lines, in governance.

In India, over the last five years, the government’s actions against select CSOs has been radical and unwarranted. The CSOs questioning the government’s policies and practices have been labelled as seditious, anti-national and unpatriotic. Indeed, a threat to society itself, as Mr Doval points out. These CSOs have been threatened, funding cut off, operations shut down, bank accounts frozen. Several people have been jailed and killed. In the last few years, protests by two major citizens’ groups, those opposing the Citizenship Amendment Act 2019 and most recently the farmers’ groups have felt the wrath of the government. Can these groups be termed as terrorists or insurgents?

Seeing social movements as a group that “war” must be waged against is a preposterous suggestion by Mr Doval. Putting CSOs in the same category as terror groups and insurgents is dangerous. It’s the present government that has declared war on its citizens, subverting, dividing and corrupting them. They have initiated the fourth-generation warfare.