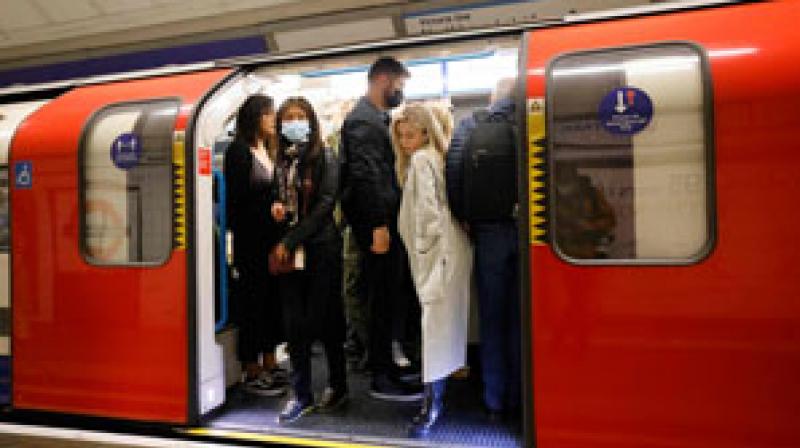 The sense of freedom was palpable in the UK in mid-September. Representational Image. (AFP)

To travel during Covid times is in a sense an act of insanity. The struggle to stay safe and celebrate freedom. But let’s ditch the faux philosophy for now. Wearing a mask on a long intercontinental journey contained within a kernel of freedom. While feeling sorry for the cabin crew in their full PPE kit. It was another matter that once we landed at Heathrow, whaaat? No masks?

I cannot tell a lie, dear reader, we pulled off our masks for at least 10 minutes, with the excuse that you can’t drink coffee with a mask on.

The sense of freedom was palpable in the UK in mid-September. Let’s not blame them. The stranglehold of the pandemic was such that all societies now strain at the leash for freedom. Try and think of our various festivals and events and election rallies before we point. Okay lecture over. The phenomenon of Brits yearning for nightclubs and pubs was tied to the weirdness of Brexit and fears of shortages. For us though, it was fear of the UK’s National Health Service. Years of colonial subjugation and its intractable rules apparently get transmitted genetically. (I joke, I joke, at least I think I do.)

Those “test and trace” rules, fears of 10,000 GBP fines, the anxiety of not knowing where or when someone will check up on you, the misery of being fleeced royally by private labs for RT-PCR tests… it all weighed up. Sit in one room, only go out for 20 minutes of exercise, keep a couple of metres between you and other residents of the house.

Well. The three tests we paid for — two mandatory tests on Days 2 and 8, and one in the “test to release” scheme for Day 5 — arrived on Day 4 of the 10-day quarantine period. The same day as we had the one and only visit from the NHS person. Who met us at the gate with our passports, and disappointingly asked nothing about how many metres we had ensured between us and how many minutes of exercise in the outdoors and so on from the strict imperial-style rules.

The Day 5 test results arrived on Day 7, which meant that our “test to release” was a strength test in patience and a cause of frustration. Small pennies compared to massive disasters. I hear you.

We squeezed out of the rules and into “freedom” after we tested negative for the third time in 10 days, having scraped our epiglottises and noses.

Only to find some supermarket shelves empty and a massive uproar over fuel shortages. Huge queues at petrol pumps were matched by panic. Almost as bad as the toilet paper pandemonium reported in the early days of the pandemic. Between the news and social media and the queues one saw for oneself, it was hard to know where the truth lived. A few miles out of Nottingham where we were when the shortage struck, there were no queues, no signs saying “no fule” and no crisis. On TV, they blamed social media, the people, the shortage of lorry drivers but almost no one discussed why there were no lorry drivers.

I mislead you here. No one actually said “lorry drivers”. As a sign of how much languages change in usage and geography and colonial times, TV kept saying no “HGV drivers”. I asked Google and realised that TV people in the UK only follow technical driving licence rules when they speak so “heavy goods vehicle” drivers which in India would be “heavy commercial vehicle”.

Why no lorry drivers? Because Brexit. But no one really wanted to say that. So embarrassing for the Boris Johnson Government. Come back, come back, said the Boris Johnson government to the people they turned away with their no more immigrants we don’t like idea. Come back and work for us on temporary visas but please leave on December 24 because we don’t really want to celebrate Christmas with you. How very odd that HGV drivers across Europe didn’t drop whatever they were doing and swim English the channel faster than Tarzan.

If the crux of a developed economy is overdone capitalism, money and spending capacity then the pain at empty pumps, empty shelves and empty pockets thanks to the government withdrawing its pandemic alleviation allowance (there’s some other colonial-style name for it) made you question Brexit. And the pandemic. Signs of shops closing down everywhere. I saw this last in the UK of the 1980s.

How unfair I’m being. Life is not always a comparison. The people were friendly. Never met any racists. At least not openly. The taxi drivers, the bulwark of all travel observations, were a delight as ever. The only difference from a couple of years before is that younger subcontinentals appear to identity as British rather than wherever their grandparents came from. The state of Afghanistan was blamed on Pakistan by those of Pakistani origin as well as the one delightful Afghan we met. Who regaled us with his Hindi, his Bengali and his old Hindi songs. “If my country was like your country,” he said, “I would have left here long ago.” His joie de vivre in spite of his fear for his Afghanistan was matched by the pain of the Syrian who mourned for his home left 20 years ago and his family left behind he may never meet again.

The countryside was beautiful, as autumn colours burst forth. That a dying leaf can cause such joy. Walking through the Bridgewater Gardens in Salford, Manchester, a new project by the Royal Horticultural Society, you had to marvel at the massive love for nature, for preservation, for restoration. A 5 km walk in the freezing rain passed in the blink of an eye as you took in walled gardens, old woodland paths, Chinese planting and plans for wild meadows.

A visit from the fire department to check the smoke alarms at a relation’s home underlined how systems can work. Without complications, without dare-I-say-it bribery, and with efficiency and compassion. At the same time, the bogey of privatising Britain’s best national assets like the NHS also raised its head.

The pandemic should have taught us that health has to be public. But as we returned to India and compulsory RT-PCR testing by private labs at Delhi airport, ah well. Human nature trumps all however far you travel.