Ironically, a BJP leader from Madhya Pradesh had once publicly pushed the cause of early marriages 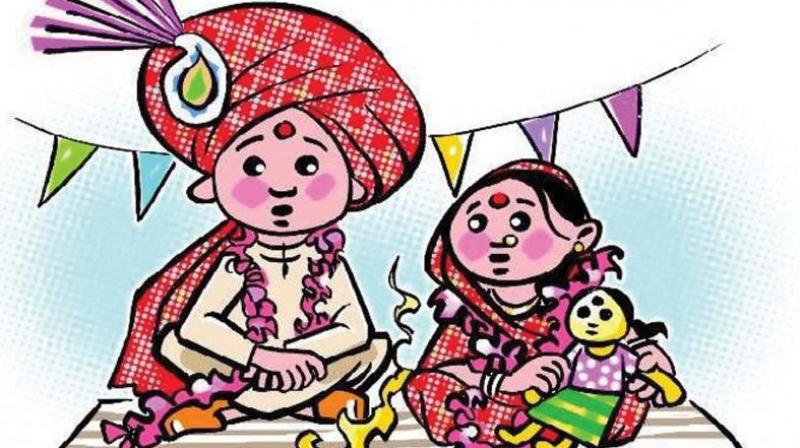 The bill, as it stands now, states that “if the bride is under 18 and the bridegroom is under 21, their parents must register the marriage within 30 days of the event”.

Does the registration of child marriages legitimise them? That question is now at the heart of a political storm in the desert state of Rajasthan with the ruling Congress and the Opposition BJP locked in a heated dispute over who is more socially progressive.

The controversy also raises a larger, related issue -- what is the role of civil society in a hyper-polarised ethos? Can it choose to remain silent, or take its own time in responding when a political storm is brewing over the very rights that it advocates for?

The context -- last week, the Ashok Gehlot-led Congress government brought a new bill amending the Rajasthan Compulsory Registration of Marriages Act 2009, on the mandatory registration of marriages, including child marriages. This amendment, passed by the state Assembly amidst an uproar from Opposition MLAs, tweaked a section of the 2009 law. The bill, as it stands now, states that “if the bride is under 18 and the bridegroom is under 21, their parents must register the marriage within 30 days of the event”. In the earlier version of the law, the age criterion was 21 years for both.

The Rajasthan government says the amendment is merely a technical update of an older law, that it will lead to greater accountability, make it easier to crack down on child marriages and safeguard minors’ interests, especially in cases where the girl is widowed. The state law minister, Shanti Dhariwal, pointed out that a marriage certificate was a legal document and it will help a widow to access benefits from government schemes.

The Rajasthan government insists that the amendments do not signify any “validation” of child marriage, that the district collectors will continue to have powers to act against the regressive social practice and that every minor has the right to get his/her marriage annulled upon becoming a major if he/she so desires.

Nevertheless, the questions that are being raised merit a debate.

That Rajasthan has a child marriage problem is no secret. It is also not the only Indian state to have such a problem and the Covid-19 pandemic is only making things worse.

In a country where the practice continues unabated due to poverty and deeply-entrenched social and cultural norms, despite a law to prevent child marriage, one would have thought that local civil society groups would be the loudest voices in the discourse, now that child marriage is back in the news.
Strangely, that has not happened.

Mahim Pratap Singh, a well-known journalist in Rajasthan, says that the amendment “throws up a lot of concerns and questions, specifically with regard to the motivations behind it. Unfortunately, however, there aren’t any answers, or even a discussion around it within Rajasthan, even by an otherwise watchful civil society. The only response to it has been in the form of half-hearted outrage by the Opposition BJP.” He added: “Interestingly, the BJP has enough of its own skeletons in the closet over this issue.”

Ironically, a BJP leader from Madhya Pradesh had once publicly pushed the cause of early marriages. Speaking to a national newspaper in May 2018, Gopal Parmar, then the BJP MLA from Agar, had said: “Earlier, girls and boys used to marry before they turned 18 and 21. Marriages were fixed when they used to be of tender age, and did not go astray… or (they did not) think of anyone else. Now, they meet at coaching classes, and some fall prey to vices like ‘love jihad’.’’
In September 2021, it is the same BJP which is trying to put its political adversary on the mat on the issue of child marriages.

“Civil society is studying the pros and cons of the amendment… Personally, I see this as a setback,” says Kavita Srivastava, a noted human rights activist and part of the Rajasthan chapter of the People’s Union for Civil Liberties (PUCL). Ms Srivastava is worried that the recent amendment could make it even more difficult to annul child marriages. “Registration could put more pressure on the girls to keep the marriage going. It is not at all clear if the amendment will meet its intended objectives. It is more likely to set things back for girls.”

Chhaya Pachauli, a health activist and director of Prayas, a NGO, does not think the recent amendment to the Rajasthan Compulsory Registration of Marriages Act 2009 will do anything to prevent child marriages in the state. “It can possibly help girls who have been child brides to access benefits from government schemes as is being claimed by the government, but it’s not at all clear how it will help prevent child marriages,” she says. Ms Pachauli too flags the “urgent need for serious deliberation around this issue among civil society groups in Rajasthan to understand and draw consensus on the kind of repercussions this amendment can have.”

However, not much discussion on this has happened as yet beyond the political landscape, she says.

In a statement, the All India Democratic Women’s Association (AIDWA) has drawn attention to some of the bewildering aspects of the recent amendment. As is known, child marriages, per se, are not invalid under the Prohibition of Child Marriages Act 2006 (PCMA, 2006) but parents and guardians of children (except women) can be punished, with imprisonment and fines, if they have promoted the marriage or have allowed it to be solemnised either wilfully or negligently. “It is therefore absurd to think that those who have been made culpable under the Prohibition of Child Marriages Act 2006 will come forward to register marriages under the amended law. The Rajasthan government’s intent in revisiting the law is not clear or viable,” says AIDWA.

These are among the few civil society voices that have spoken out so far. More need to come forward.

Child marriages disproportionately impact girls at every level. It not only hampers their education and life chances but also affects their health and mortality. This is not just about one state or a specific political party.

Let there be a wider debate, and beyond the political landscape. If we call ourselves liberals, or see ourselves as part of civil society, we should engage with, and critique, if necessary, those who are part of our comfort zone as well as those we find abhorrent.