The domestic political consequences for poorly performing leaders aside, the pandemic is exacerbating existing international schisms 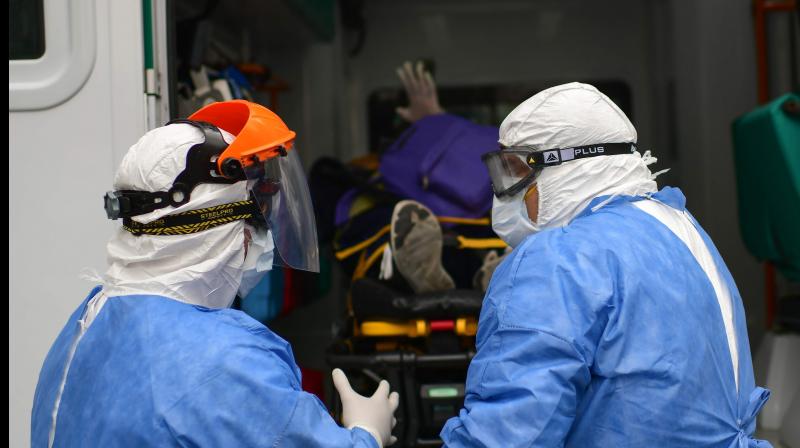 The pandemic led to open hostility as the US seeks a transparent inquiry and responsibility-fixing. AFP Photo

Historians say pandemics can be inflection points for major global change. Arab historian Ibn Khaldun lived through the 14th century bubonic plague, or “black death”. In his preface to the study of world history, he reasoned they are not random acts of God. The plague he survived ended the Middle Ages, clearing the path for the Renaissance. Will Covid-19 similarly impact the contemporary world?

Over the past decade, liberal democracies have been mutating with the rise of populist-nationalist leaders. Externally, inter-state ties were evolving from the certitudes of a unipolar world towards a Sino-American bipolar or a nascent multipolar paradigm. In several significant democracies, leaders emerged by successfully tapping the angst of workers and the middle class over globalisation.

After the Arab Spring churn in West Asia, refugees pushed into Europe, exacerbating public paranoia. This boosted extreme right-wing parties like neo-Nazis. But above all, in 2016 Donald Trump was elected US President, followed in 2019 by the ascension of Boris Johnson as British Prime Minister, riding a Brexit wave, and Jair Bolsonaro as Brazil’s President. Earlier, Narendra Modi swept into power on a Hindutva-nationalism plank in 2014, repeating it in 2019.

In Europe, low-key Chancellor Angela Merkel kept infections and mortality low, unlike Italy and Spain. Sweden experimented with a non-lockdown but safety-based approach that saw a high but relatively manageable number of cases and deaths. The performance of populist-nationalists in India, Brazil, Britain and the US ranged from passable to disastrous. In first three, the leaders have already won elections, but US President Donald Trump faces re-election in November. Brazil’s Jair Bolsonaro displayed scorn for the virus, even moving amid crowds without precautions. Brazil ranks third globally for infections and fatalities. Britain’s Boris Johnson, equally nonchalant, got infected and had to be admitted to an ICU for a few days. Britain is fifth, having delayed safety measures, in particular ignoring old people’s homes, causing high fatalities.

US President Trump was another virus sceptic. Out of five million-plus global cases, the US now has nearly a third. For this the Trump presidency hangs in balance in the November polls. Realising an economic recovery is unlikely, nor is the infection curve expected to drop uniformly across the US, he has a twin strategy. One, to reopen the US economy, despite some experts fearing it will be premature, and two, by scapegoating China and the World Health Organisation.

The New York Times estimates that by May 3, instead of the actual 65,307 deaths, the number would have been 29,410 or 11,253 had social distancing started on March 8 or March 1 respectively. On May 18, President Trump wrote to Dr Tedros A. Ghebreyesus, director-general of the World Health Organisation, giving a 30-day notice that unless they “commit to major substantive changes” he will make permanent the suspension of America’s contribution.

The US alleges China and WHO delayed declaration of a pandemic when by early January both knew that Covid-19 was highly communicable and lethal. In fact, on February 3, the WHO chief was criticising the US for imposing a China travel ban.

Prime Minister Narendra Modi didn’t mock Covid-19, but he also ignored early action. The WHO declared a pandemic on March 11. On March 10, Jyotiraditya Scindia resigned from the Congress, joining the BJP the next day. Over the next 10 days the BJP was preoccupied overthrowing Madhya Pradesh CM Kamal Nath, who resigned on March 20. The lockdown began March 25, but it could have started 10 days earlier, with a short window for workers desiring to return home. At that stage, they were mostly Covid-19 free. The subsequent saga of their internment, movement on foot or bicycle blots the government’s handling of less privileged citizens. Moreover, their late return to distant states may spread the epidemic to rural, semi-urban areas with poor healthcare facilities.

The domestic political consequences for poorly performing leaders aside, the pandemic is exacerbating existing international schisms. The unipolar order and US hegemony faced a challenge from China, now with Russian support, since the 2008 financial crisis. This accentuated after President Xi Jinping assumed office in 2012. The US tried a contain and engage policy, conscious of mutual dependence of the world’s two largest economies. President Trump sharpened the trade standoff by weaponising sanctions through higher tariffs, besides loudly protesting intellectual property theft.

The pandemic led to open hostility as the US seeks a transparent inquiry and responsibility-fixing. Even the European powers are no longer seeing China as a benign partner. At recent World Health Assembly, a compromise resolution was mediated by the Europeans for an inquiry without naming China. Meanwhile, “de-coupling” gains currency as many nations like Japan want to reduce dependence on Chinese supply chains for critical goods production. China, having controlled Covid-19, is kickstarting its industrial behemoth while developed nations are going through stages of calibrated reopening.

But until a vaccine arrives, maybe by early next year, and covers 60 per cent of the world’s population to create herd immunity, economic and trade ties may be partially reconfigured. There lies an opportunity for India. The suspension of labour laws and overnight privatisation may or may not lure investments but would destabilise healthy capital-labour relations. India faces an extra-assertive China this summer, and now an edgy Nepal with new territorial claims.

As Afghanistan is nudged by the US to accommodate the Taliban, with India also so advised, and US troops scaled back, a perfect storm is brewing. Internal economic and health crises is combining with South Asia’s increased instability. Low oil prices are slowing down GCC economies and thus will bring multitudes of Indian workers homewards. States like Kerala, having handled the pandemic well, may be hobbled by their burden, besides diminished remittances. The year 2020 will test all democracies and their leaders. If President Trump loses in November, it may have a domino effect on other nationalist-populists who mishandle the pandemic. Some may consolidate power by undemocratic means. Whether this is constructive destruction or random chaos, only the coming months will tell.