Sunanda K Datta Ray: US, China on the brink of a new global cold war

And India is caught uneasily between the contending giants 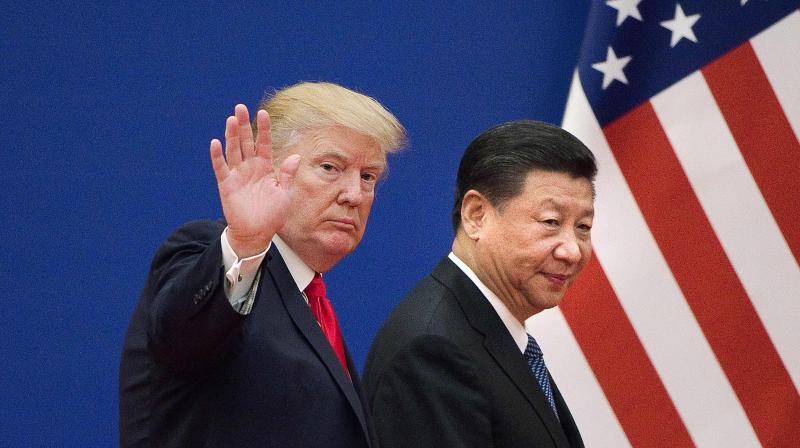 Donald Trump has been talking of 'consequences' if Xi Jinping's government was knowingly responsible for the Covid-19 outbreak. (AFP)

We are on the brink of a global war. It's not just a battle against a mysterious and deadly germ but an old-fashioned contest for supremacy like the one the United States and the Soviet Union waged for decades. US president Donald Trump’s threat that China must face up to the “consequences” if it was “knowingly responsible” for the outbreak of Covid-19 is a reminder that an India that is neither pragmatic nor principled might be caught uneasily in the middle of the next Cold War.

It all began with the Sino-American trade war, developed into an unseemly slanging match over the coronavirus pandemic, and is now reflected in China’s bid to tighten its grip over the South China Sea. It’s difficult not to see India’s latest restrictions on foreign investment in the light of this confrontation. Although the new regulations apply to all foreign direct investment from countries with which India shares a land border, they are obviously not aimed at either Bhutan or Afghanistan. Moreover, New Delhi suddenly imposed the condition of prior government approval for such investments only when the People’s Bank of China raised its stake in India’s Housing Development Finance Corporation from 0.8 per cent to 1.01 per cent.

China’s net investment in India was only $1.6 billion until 2014, most of it in infrastructure and involving major Chinese state-owned enterprises. But total investment increased five-fold to at least $8 billion in the next three years, according to the Ministry of Commerce in Beijing, with a noticeable shift from state-driven to market-driven private sector firms. Even this figure doesn’t take into account all Chinese corporate acquisitions in the technology sector, nor investments routed through third countries. For instance, a $504 million (Rs 3,500-crore) investment by the Singapore subsidiary of the Chinese mobile and telecom firm Xiaomi would not figure in official statistics because of how investments are measured.

It will be interesting now to see how the Narendra Modi government responds to American pressure over Huawei, the multinational technology company with a presence in more than 170 countries and earning $122 billion annually. Trump wants a total ban on Huawei’s 5G technology, but like the British, French and German leaders, Modi has so far held his own. However, seeing how proud India’s prime minister is of his so-called friendship with the US president, and also how quickly he buckled under when Trump threatened “retaliation” if he didn’t lift his own ban on exporting hydroxychloroquine, no one is sure how long New Delhi will dare to remain defiant.

India’s own problems with China are not to be minimised. Apart from the long-standing territorial dispute, unequal trade saddles this country with a $53.57 billion deficit. Chinese smartphones like Oppo and Xiaomi lead the Indian market with an estimated 72 per cent market share, leaving Samsung and Apple behind. TikTok, the controversial video app, has 200 million subscribers in India, where it has overtaken YouTube. Alibaba, Tencent and ByteDance rival the US penetration of Facebook, Amazon and Google.

Chinese investors have also put an estimated $4 billion into Indian start-ups which rely on overseas venture capital and are called unicorns when they are worth more than $1 billion and are funded from abroad. In the past five years, 18 of India’s 30 unicorns have been Chinese-funded.

There are additional concerns that since Covid-19 has taken a huge toll of equity prices, the Chinese might be able to acquire some of India’s most valued companies in hostile takeovers. Clearly, neither the dreadful coronavirus explosion in Wuhan nor the trade war with the United States has weakened China’s international bargaining position. The trade war has raged since 2018 when Trump began setting tariffs and other trade barriers on China to force it to make changes to what he called “unfair trade practices”, a growing trade deficit, theft of intellectual property, and the forced transfer of American technology.

Meanwhile, China’s efforts to extend its control over the Spratly Islands where there are multiple competing claims by setting up new administrative structures have also incurred American displeasure.

The two new districts will be under the authority of the local government in Sansha, a city in the southern island of Hainan, and will govern the Paracels (seized from Vietnam in 1974) and Macclesfield Bank -- an area claimed by Vietnam and Taiwan -- as well as the Spratly Islands and their adjacent waters, where there are multiple overlapping claims.

China is accused of expanding its control over the South China Sea by building artificial islands and facilities that can be used for military purposes. Beijing claims almost all of the area but has conflicting claims with Vietnam, the Philippines, Taiwan, Malaysia and Brunei. The conflict has remained unresolved for decades despite talks between China and the Association of Southeast Asian Nations on a code of conduct governing governmental behaviour in disputed waters. The two sides are committed to finalising the code by next year, but progress has been slow since a draft agreement was presented in August 2018. Beijing’s persistent refusal to make the code legally binding prompts the suspicion that its strategy is to complete the infrastructure it wants and enhance and establish its military presence in the area so that its hegemonic authority cannot ever be questioned.

Neither singly nor collectively can Asean challenge such bullying. The United States, with which several Asean governments have defensive treaties, can, but is unlikely to go to war with China unless its own interests are directly threatened.  But the US Navy will probably continue its provocative patrols near the disputed features that Beijing claims in the South China Sea, and Trump will no doubt continue to make contentious and accusatory statements about Beijing while haggling over taxes and duties. It’s the Cold War all over again.