Opinion   Columnists  23 Feb 2020  A new bill that is loaded against marginalised
Opinion, Columnists

Sweta Dash
Sweta Dash is a gender studies scholar at Ambedkar University. She is associated with the Right to Food and Rethink Aadhaar campaigns.

The Economic Survey 2018-19 clearly states that “India is set to witness a sharp slowdown in population growth in the next two decades”. 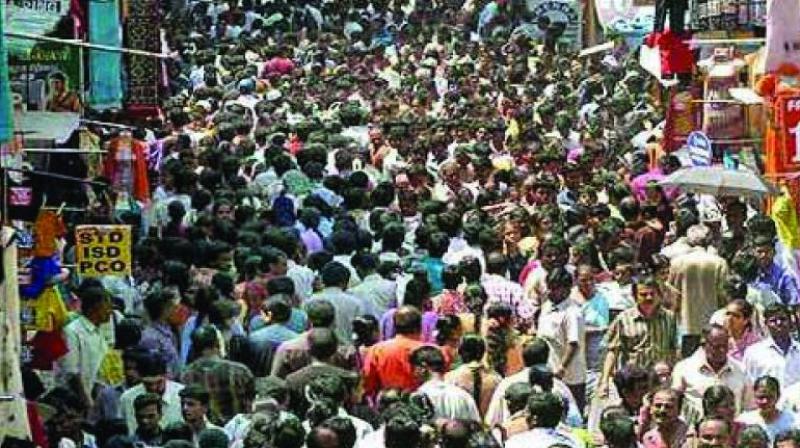 Population explosion has been a regularly used trope to incite fear and panic in many Third World countries. (Representational Image)

On February 7, while the country was in the throes of the anti-CAA/NRC/NPR protests and waiting anxiously for the Delhi elections, the orchestrated fears of population explosion surreptitiously made their way into the Parliament again. Anil Desai, Shiv Sena MP, introduced the Constitution (Amendment) Bill, 2020, enforcing a two-child formula on the population.

The bill claims that “population explosion” is a frightening phenomenon that “will cause many problems for our future generations.” Desai urges that the government must tackle the situation with incentives and punitive measures at the earliest: “The State shall promote small family norms by offering incentives in taxes, employment, education, and so on, to its people who keep their family limited to two children and shall withdraw every concession from and deprive such incentives to those not adhering to small family norm, to keep the growing population under control.”

The Economic Survey 2018-19 clearly states that “India is set to witness a sharp slowdown in population growth in the next two decades”. It illustrates that the decreasing growth rate (i.e. less than one per cent in 2021-31 and under 0.5 per cent in 2031-41) will be similar to that in Germany and France. However, the working age population and the ageing population will be on rise. This implies the need to urgently invest in employment opportunities and healthcare facilities.

The Sample Registration System, 2017, the largest demographic survey that provides annual estimates of fertility and mortality indicators, corroborates these findings. At an all time low of 2.2 in 2017, the steadily declining total fertility rate (TFR) in India is actually very close to replacement level. Kerala and Delhi record the lowest TFR at 1.7 and 1.5, respectively.

Finally, one needs to engage with the horrendous arguments about Muslims procreating more than the others. Based on an analysis of the National Family Health Survey-4, the TFR for Muslims has actually declined by 23 per cent whereas that of Hindus has declined by about 17 per cent. If only numbers could be used to silence the communal incitements of Hindutva leaders like Sakshi Maharaj!

Population explosion has been a regularly used trope to incite fear and panic in many Third World countries. In his work, An Essay on the Principle of Population, in 1798, Thomas Malthus warns, “Population, when unchecked, increases in a geometrical ratio. Subsistence increases only in an arithmetical ratio.” For him, when people multiply beyond control, the world would run out of resources to feed its people. The need to see through the inadequacies and prejudices of such ideas could not be emphasised enough.

In India, the reason to worry for inadequate resources is not our population but income inequality. The Oxfam report states India’s top one per cent bag 73 per cent of the country’s wealth. The survey records a dangerous finding that the minimum wage worker in rural India will take 941 years to earn what the top paid executive at a leading Indian garments firm earns in a year! As Nisha Agrawal, the CEO of Oxfam India, explains, “The billionaire boom is not a sign of a thriving economy but a symptom of a failing economic system. Those working hard, growing food for the country, building infrastructure, working in factories, are struggling to fund their child’s education, buy medicines for family members and manage two meals a day. The growing divide undermines democracy and promotes corruption and cronyism.”

Meanwhile, the Directive Principle in Article 39 notes: “State will strive to ensure that there is no concentration of wealth, and thus try to achieve some kind of income equality.” The irony is brutal.

The National Sample Survey Office (NSSO) surveyhas reportedly showed a 45-year high unemployment rate of 6.1 per cent. However, it also showed improvements in terms of longer period of education. By that data, we are facing a crisis of educated unemployment.

The 2019 Global Hunger Index ranks India 102nd out of 117 qualifying countries. Such threatening figures are corroborated further by the Comprehensive National Nutrition Survey which exposes undernutrition, overnutrition and obesity.  The survey indicates that between 1992 and 2016, chronic malnutrition of children has declined by only one-third.

Additionally, the new bill harps on about some newfound concern for natural resources: “Our natural resources are extremely overburdened. The rate of growth of any country is directly related to size of its population. Natural resources like air, water, land, woods, etc. are subjected to overexploitation because of overpopulation.” While addressing the United Nations Climate Action Summit last year, the Prime Minister had also asserted this concern and gloriously claimed that “need, not greed” has been our guiding principle. However, there is a different reality on the ground: from displacement and misuse by Adani and other crony capitalists to the underutilisation of funds by the ministry of environment, forest and climate shange (MoEFCC). Reprimanding the disuse of Rs 75,000 crores by MoEFCC, a three-judge bench headed by Justice M.B. Lokur, since retired, had asked, “What are you doing? So many funds have been created under the orders of this court. Which are these funds and what is the amount lying in these funds?”

The country is suffering from the tremendous burden of a failing economy wherein access to food, work and education are seriously affected. Instead of sustained efforts to bridge this abyss, the government is piggybacking on the banal rhetoric of “population explosion”. Meanwhile, policymakers do not bother to think twice about promoting safe sex, practice of sexual hygiene and understand consensual sex. The demand for a two child policy, then, is not a neutral concern. It is deeply riddled with masculinist, casteist, classist, and capitalist vested interests.

Our hopes rest on the possibility of the bill being rejected by the Parliament.

Sweta Dash is a gender studies scholar at Ambedkar University. She is associated with the Right to Food and Rethink Aadhaar campaigns.