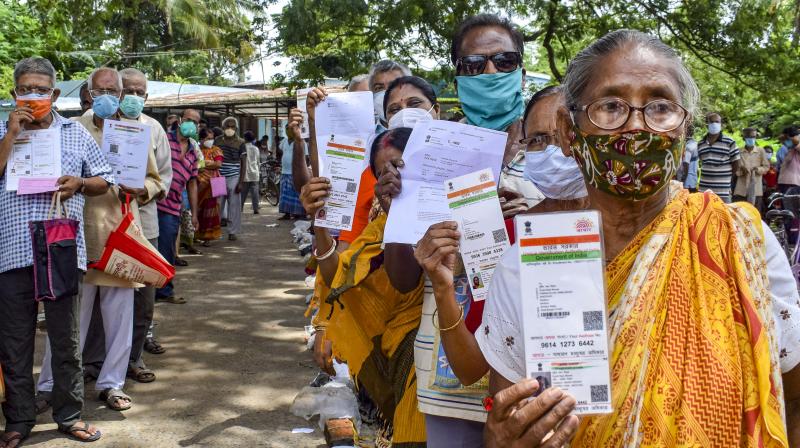 Prime Minister Modi, with his love for technology, is enthused to bring everything into digital order, and all that he wants is to keep a close eye on every citizen. (Representational Photo: PTI)

Prime Minister Narendra Modi displays a neophyte’s zeal for the use of Aadhaar, an idea that he had strongly opposed when he was the chief minister of Gujarat. But Mr Nandan Nilekani, in a meeting with Mr Modi soon after he became Prime Minister in 2014, persuaded him about the virtues of Aadhaar, and Mr Modi became a convert. So, the Narendra Modi government in its first term in office brought the Aadhaar (Targeted Delivery of Financial and Other Subsidies, Benefits and Services) Act 2016. Then finance minister Arun Jaitley made it into a money bill which need not get the Rajya Sabha’s approval because the BJP did not have a majority in the Upper House. This was the first act of subterfuge. Then the government decided that Aadhaar should be linked to all bank accounts. So, of the 140 crore bank accounts in the country, 120 crores are now linked to Aadhaar, says Saurabh Garg, CEO of the Unique Identification Authority of India (UIDAI). He also disclosed that newborn children will be issued Aadhaar at the hospital soon. So, it is not surprising that the Modi government is now eager and anxious to link the Aadhaar number to voter registration as well.

But law and justice minister Kiren Rijiju went about his job in a round-about manner. First, he said that the move was based on the recommendations of the parliamentary standing committee which included members from all parties. But he forgot to tell us that not all the recommendations of a standing committee are always accepted by the government of the day. And as Nationalist Congress Party Lok Sabha member Supriya Sule pointed out, the government should bring forward a comprehensive electoral reform bill which would include reservations for women. Of course, electoral reform of the comprehensive kind is not what this government wants. It is also true, of course, that it is the same with all other governments as well.

Mr Rijiju tried to soften the blow by saying that fresh voter registration will now take place four times in a year instead of one. The second reform of the bill is gender neutrality. Earlier, if a man was in service, his wife was counted as a voter. But this was not the case with a working woman. The husband was not recognised as a voter because of his working wife. So, the term “spouse” has been inserted. The third reform in the bill is that the Election Commission should give a notification before it can requisition a building for election purposes.

But the crux of the Election Laws Amendment Bill 2021, as passed by the two Houses of Parliament earlier this week, is that of linking the Aadhaar number to voter registration. It might appear that this is a facilitatory measure where a new voter can register himself or herself by using the Aadhaar card. But the intention of the government is something else. The law minister said that this is to weed out voters who are registered in more than one place. Or those who possess more than one voter identity card. The government says that the way to end this malpractice is to connect it with Aadhaar. It is basically an expansion of the use of Aadhaar.

But neither the Supreme Court nor Parliament had spelled out what the Aadhaar number is meant to be for. Is it a social security number as it is in the United States? All governments have fought shy of making this clear, or clarifying what its position is. It was initiated by the Manmohan Singh government under Nandan Nilekani, who mooted the idea, as a way of streamlining the beneficiaries of government subsidies. And that is what it should be. And even under the 2016 Act, it remains to identify the beneficiaries of subsidiaries. The question of whether it should be extended for other purposes has stayed unsettled. The Narendra Modi government is misusing this gap in the definition of Aadhaar to extend the power of the State to identify and monitor citizens. The Supreme Court’s judgment that there can be legitimate reasons for State intrusion into the privacy of the citizen had been used by Mr Rijiju to defend the use of Aadhaar’s new function. At the same time, he has said that the Election Commission would use Aadhaar to check the identity of the voter and no other data would be brought into the public domain. It is of course true that given the Leviathan that the modern state is, it can even enter the minds of the citizens through psychiatric means as had happened in the former Soviet Union. And it can do so without Aadhaar as well.

So, the issue is not about the misuse of Aadhaar to violate the privacy of the citizen. The basic question is: what is Aadhaar, and what is it meant for. If the government brings in a law making Aadhaar an all-purpose identity card meant for all things, there would be no need for a separate voter identity card either. Aadhaar should suffice. But no single identity marker can serve all purposes. This dream of the State streamlining the lives of citizens should not be allowed. The use of Aadhaar should be restricted to the beneficiaries of State subsidies, whether they are farmers or wage workers.

Prime Minister Modi, with his love for technology, is enthused to bring everything into digital order, and all that he wants is to keep a close eye on every citizen. He is busy constructing Big Brother with digital reach. For a man and a party which believes the State is God, the surveillance apparatus is considered legitimate. Mr Modi looks upon Aadhaar as a remote-control device to monitor citizens. This idea must be challenged. His ideas — such as “one nation, one election” or “one nation one ration card” — is to establish the dictatorship of the State.

This is one of the evil ideas that both socialism and fascism share — the supremacy of the State and the subservience of the individual. All political parties in India, from the left to the right end of the spectrum, want to use the State as an instrument to rule over the people. That is why most of the Opposition parties who criticise the BJP on this issue sound weak and false. The Supreme Court has, sadly, failed to check the expanding tentacles of the State.