The world is becoming aware of the double standards in Chinese propaganda, and for the first time it is taking steps to counter its moves 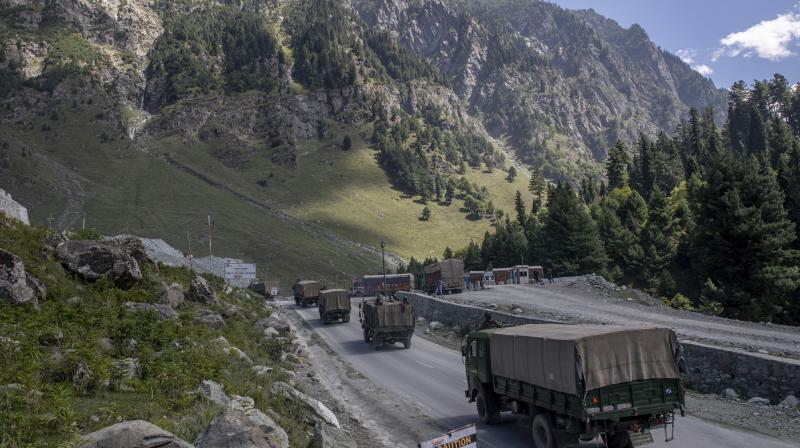 An Indian army convoy moves on the Srinagar- Ladakh highway at Gagangeer, northeast of Srinagar, Indian-controlled Kashmir. The Indian military said it apprehended a Chinese soldier Monday, Oct. 19, in the remote Ladakh region, where the two countries are locked in a monthslong military standoff along their disputed border. (AP)

Since five months now, Indian and Chinese troops have stood face-to-face in the high Himalayas; in all probability, the standoff will continue during the cold winter months ahead in Ladakh.

It has consequences at many levels, not just militarily.

The first: what has President Xi Jinping achieved by trying to advance a few hundred meters in Galwan, Gogra or Pangong Tso?

Different motives have been attributed to the Chinese chess moves.

To cite a few, Beijing wanted to stop the Darbuk-Shyok-DBO Road, protect China’s projects in Gilgit Baltistan (and Shaksgam valley occupied by China); gain strategic advantages on the ground; enhance Chairman Xi’s prestige; boost the standing of the People’s Liberation Army; humiliate an arrogant competitor (India) in a period of weakness; it was even rumoured that Gen. Zhao Zongqi, the Western Theatre Command chief, thought he would get a seat in the powerful Central Military Commission after Ladakh.

China is today the loser: infrastructure development will continue, India will not renounce its legitimate claims on Gilgit-Baktistan, and so on.

Further, Tibet, Taiwan, Hong Kong or Xinjiang may come up for discussion in the not-too-far future and the “One-China” policy may be questioned in many quarters.

This didn’t stop Zhao Lijian, the Chinese foreign ministry’s “wolf warrior” spokesman, to continue with his anti-India tirades: “China does not recognize the so-called ‘Ladakh Central Territory’ and ‘Arunachal Pradesh’ illegally established by India, and opposes development of infrastructure construction in border dispute areas for the purpose of military control.”

This diplomat had the cheek to add: “Neither party should take any actions in the border area that would complicate the situation in order to avoid affecting the efforts of both parties to ease the situation.” This was the day Beijing announced a new strategic road leading up to Metok, north of the McMahon Line.

A Chinese TV report said the Pai-Metok Highway will be completed by the end of September 2022: “After completion, the length of the road from Nyingchi City to Metok County [North of Upper Siang of Arunachal Pradesh] through Bomi County will be shortened from 346 km to 180 km, and the driving time will be shortened from 11 hours to 4.5 hours.”

At the same time, the world is fast becoming aware of the constant double standards in Chinese propaganda, and for the first time it is taking steps to counter Beijing’s moves.

Take France for example. In the past, Paris was often reluctant to offend China as it was “doing business” with Beijing. But things are changing; realising the danger of Chinese hegemony for the planet, French President Emmanuel Macron recently appointed Christophe Penot, his ambassador to Australia, to the new post of ambassador for the Indo-Pacific.

The Sydney Morning Herald reported: “The coronavirus has catalysed European concern over Chinese government actions in Hong Kong, the treatment of Uyghurs in Xinjiang, military incursions into the South China Sea and political interference.” In June, Mr Penot had already warned that international standards were increasingly called into question, adding that the current Covid crisis was likely accelerate the process: “France and Australia have a particular responsibility here to ensure that the post-Covid world does not get worse and, if possible, that it becomes better than the world before.”

The Australian newspaper commented: “France is the last European power to change its vision of China and the region. In September, Germany, Europe’s largest economy, which has long enjoyed close ties with Beijing, released its first Indo-Pacific strategy focused on increasing diplomatic pressure on China.”

France in the Quad?

A couple of years ago, I had asked an Indian observer why France was not included as a participant in the Quad. “Nobody thought of it”, he had told me. This has changed after President Macron’s visit to India in March 2018. Addressing a French gathering in New Delhi, the young President reminded his countrymen: “France is a power of the Indian and Pacific Oceans; we are present at Reunion, we are also there in French Polynesia and New Caledonia. And we are a maritime power, it is often forgotten but France is the second maritime power in the world. We have a strong navy, we have nuclear submarines equipped like few other powers in the world; a maritime surveillance capability through our own satellites and technologies; it is obvious we are a military and intelligence power ranking us among the first nations in the world.”

France is ready to work with India on the oceans.

A few months earlier, C. Raja Mohan and Darshana Baruah had written for Carnagie India about Deepening the India-France Maritime Partnership: “As maritime security acquires greater salience in India’s foreign policy, New Delhi is increasingly looking to leverage its strategic partnerships, particularly with Paris. Although India and France have joined forces on a number of issues since 1998, regional cooperation in the Indo-Pacific has never risen to the top of the agenda. However, this may be about to change.”

After the Quad’s last meeting in Tokyo last week, US spokesperson Cale Brown said the foreign ministers of the US, Japan, Australia and India had reaffirmed their collective efforts towards a free, open, and inclusive Indo-Pacific: “they pledged to continue regular consultations to implement their vision of a peaceful, secure, and prosperous Indo-Pacific”.

US deputy secretary of state Stephen Biegun more recently explained: “The Quad is a partnership driven by shared interests, not binding obligations, and is not intended to be an exclusive grouping. Any country that seeks a free and open Indo-Pacific and is willing to take steps to ensure that should be welcome to work with us.”

It seems that Paris’ vision could perfectly fit into this scheme. So why can’t France join the four founding nations?

Emmanuel Lenain, French ambassador to India, answered the question in an interview with India Today: “Indo-Pacific is a priority. Both the leaders [Modi and Macron] have been working on that at least for the past four or five years. It is about values. We want an open, transparent Indo-Pacific. Now, what would be the framework. I don’t think anything is exclusive… All like-minded countries should join efforts towards an open, transparent Indo-Pacific.”

It sounds like the US secretary of state’s definition.

Whether France joins or not, there is no doubt all these new collaborative efforts should be credited to President Xi and his reckless foreign policies. One more “loss” in his balance sheet.