Mr Gadkari refused to be drawn into a conversation on political issues. 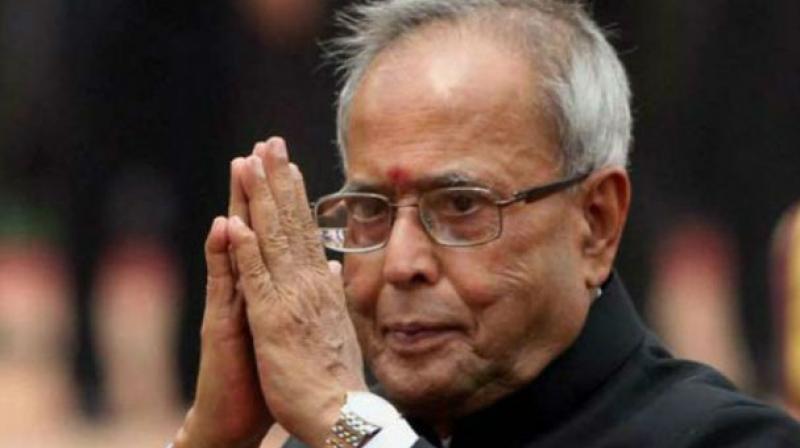 It is well known that former President Pranab Mukherjee has a fine political mind and an amazing memory. Mr Mukherjee can reel off facts and figures about past political developments, even going into details like the seating arrangement at a meeting. When someone recently remarked that Mr Mukherjee had the memory of an elephant, Congress president Sonia Gandhi quipped: “Two elephants.” Given Mr Mukherjee’s reputation, people were baffled that the former President’s latest book The Coalition Years: 1996 to 2012 had quoted from another book while referring to the proceedings of a meeting of the Congress Working Committee at which he was present. Instead of giving his own account, Mr Mukherjee has quoted from journalist Rasheed Kidwai’s book, Sonia: A Biography about the meeting at which P.A. Sangma, Sharad Pawar and Tariq Anwar raised the issue of Mrs Gandhi’s foreign origins which eventually led to their departure from the Congress. Congress insiders maintain that Mr Mukherjee may have decided not to present a personal account of this meeting because of the uncharitable remarks about Mrs Gandhi and her parents. Instead, Mr Mukherjee used Mr Kidwai’s second-hand version of the internal proceedings.

Union minister for road transport and highways Nitin Gadkari was at his amiable best at a tea party he hosted last week for the media on the occasion of Diwali. Mr Gadkari refused to be drawn into a conversation on political issues. Instead, he held forth on the major projects being undertaken by his ministry and even took on personal questions. In the course of this informal chit-chat, Mr Gadkari confessed that there was a time when he was obsessed with the chartbuster song, Teri meri prem kahani hai mushkil, from Salman Khan-starrer Bodyguard and even used it as his caller tune for months. Today, he has changed it to the famous song, Itni shakti hame dena data from the movie, Ankush. Perhaps a sign of the troubled phase the BJP is going through. Mr Gadkari also dwelt, at length, about his weight loss programme. He disclosed he had shed over 30 kg since he underwent a bariatric surgery. He is now on a maintenance diet under the supervision of actor Randeep Hooda’s sister, the well-known Delhi-based nutritionist, Anjali Hooda-Sangwan.

When senior Congress leader and former Madhya Pradesh chief minister Digvijay Singh married for the second time two years ago, his family virtually boycotted him. Relations between them were so bitter that they just about exchanged pleasantries. Given this ongoing cold war it was, therefore, surprising when Digvijay’s son, an MLA from their native place Raghogarh, and brother Lakshman Singh, joined him on his ongoing Narmada Parikrama. The senior Singh, accompanied by his second wife, is currently undertaking a six-month Narmada Parikrama across Madhya Pradesh. Though it is meant to be a religious yatra, Digvijay is using this opportunity to regain his lost credibility and re-establish his connect with the people who had handed him a humiliating defeat over a decade ago. Reports from Madhya Pradesh suggest that Digvijay’s efforts are yielding results and people are responding favourably. Perhaps, this is what prompted Digvijay’s son to join his father on the yatra. According to the grapevine, Jaivardhan Singh fears that in the process of gaining his father’s material legacy, he may end up losing his political legacy to Digvijay’s second wife. It is being speculated that Digvijay’s second wife may be his choice for the Raghogarh seat in the next elections.

A special function was held last week at the Maharashtra Sadan in Delhi to confer former Prime Minister Manmohan Singh with the Mohan Dharia Award for nation-building. The award has been instituted in the memory of the former Union minister Dharia by his family, which now runs the NGO Vanrai, founded by him.

The low-key function was attended, among others, by a sprinkling of Congress leaders, including former Maharashtra chief ministers Sushil Kumar Shinde and Prithviraj Chavan. The guests also included a lone Bharatiya Janata Party leader, Sonepat MP Ramesh Kaushik, who was formerly with the Congress. Mr Kaushik was attending the programme as a friend of the Dharia family. However, Mr Kaushik left the venue abruptly after receiving a phone call, shortly before the proceedings commenced. Apparently, the call was from the BJP office asking him to skip the function. It would appear that the BJP has a mechanism in place to keep a sharp eye on its leaders.