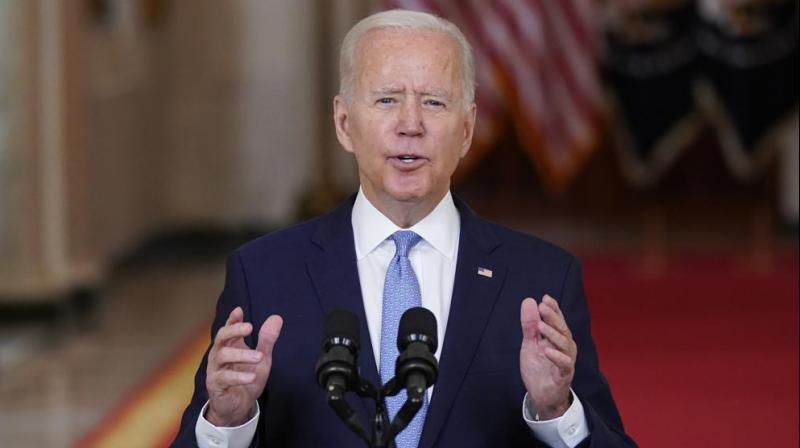 This is President Biden’s first significant strategic move and one that will have profound effects on global geopolitics. (AP Photo)

The French are furious. They believe they have been had. Their $66 billion deal to build a dozen conventional submarines for Australia has been torpedoed by a counter-offer by the United States to build eight nuclear-powered undersea behemoths for the Australian naval fleet.

The Australian government, on learning about the offer, which was announced by US President Joe Biden on September 15, promptly scrapped the French deal and announced they would be delighted to have nuclear submarines instead.
The US-Australia submarine deal is part of a far more significant trilateral partnership launched that day between the United States, Australia and the United Kingdom. It is a major step towards resisting rising Chinese aggression in the Indo-Pacific region.

This is President Biden’s first significant strategic move and one that will have profound effects on global geopolitics. It also highlights the criticality of the Indo-Pacific in world politics.

Pointing out that the US, Australia and Britain “have long been faithful and capable partners”, Mr Biden declared: “Today, we are taking another historic step to deepen and formalise cooperation among all three of our nations, because we all recognise the imperative of ensuring peace and stability in the Indo-Pacific over the long term.”

The French, however, did not see the bigger picture. It’s a betrayal, said French foreign minister Jean-Yves Le Drian. Commenting on the Australian government’s decision to renege on the submarine contract, he remarked: “Speaking politely, it’s a real stab in the back… We had established with Australia a relationship of trust ... that trust has been betrayed. And today I am angry, with much bitterness at this break.”

Indeed, he had reason to be angry. For, the French-Australian deal had been in the works since 2014 and had virtually been cemented. Moreover, it was designed to last 50 years. The French foreign minister said that they had been discussing the details of the submarine deal with their Australian counterparts up to a couple of days before the surprise announcement.

He said the new partnership is the most significant strategic development for Australia since the signing of the ANZUS treaty between Australia, New Zealand and the US following the Second World War. Not only will Australia become the second country after the UK to get state-of-the-art US nuclear technology, but it also signifies its integration into a much larger military system.

All that is of course little consolation for France, which has lost a massive defence contract, as well as suffered a loss of face. It’s a humiliation for France and one that is destined to leave a scar on trans-Atlantic ties. Paris has withdrawn its ambassadors from Washington and Canberra in protest. It also cancelled a high-profile US-France celebratory event marking the 240th anniversary of the Battle of the Capes. The grand official reception at the Residence of France in Washington D.C. to celebrate this event on September 17 was called off at the last minute, with the French foreign minister saying that going ahead with it would have been “ridiculous”!

What should worry the French and other European powers more is that the announcement of the AUKUS marks the beginning of a significant strategic shift away from Europe, a part of the globe that has dominated global geopolitics for over a century. The focus has shifted completely and irrevocably to the Indo-Pacific, which is now the current fulcrum of world geopolitics.

The consequent downslide in Washington’s relations with Western Europe is somewhat inevitable. The influential US think tank Carnegie Endowment for International Peace carried an article last year on why Europe’s relations with the United States are destined to erode. Author David Whineray wrote one reason for this is that the “US interest in Europe -- a product of the dominance of the Cold War in US foreign policy -- will continue to decline this decade. As others have argued, the new Cold War is with China. The focus of US foreign policy of any futuremadministration will be the Pacific, not the Atlantic.”

And indeed, this is the broader reason for the spat involving France and Australia. For Washington, Australia’s ability to stand up to China is more important than relations with Paris.

Europe perhaps does not quite see it that way. It only feels increasingly frustrated with the United States for several reasons, not the least of which was the sudden, unilateral US decision to quit Afghanistan in the middle of the night. The reaction in Britain, the closest US ally, was nothing short of fury. A BBC report quoted an unnamed Cabinet minister who felt the US unconcern about the Afghanistan debacle shows that America is “looking inward and is unwilling to do even a modest amount to maintain global order”. The minister added: “The US remains by far and away our most important ally, but we are not Washington’s most important ally by some stretch.”

Coming from a British minister, that is indeed something. The trans-Atlantic divide can only further widen. Already issues like Washington’s decision to restrict visas for Europeans (as part of its Covid-19 containment plan), its continued apathy on climate change, the abrupt troop withdrawals from Germany as well as disagreements over issues involving China and Hong Kong have made relations more acerbic than ever before. The Europeans also complain that President Biden’s policies demonstrate an unconcern for the rest of the world and are not very different from Donald Trump’s “America First” approach.

There are, however, other more profound dynamics at work. America is rapidly shifting away from dependence on the Chinese economy and its technology while Europe remains deeply engaged with China in both those areas, and therefore has not supported a hard anti-Beijing posture.

The French might have reason to be furious, but they would only be imprudent if they do not read the writing on the wall. It is time for some serious strategic rethinking in Europe, which has leaned far too long on the United States for its security requirements, and more.