Traffic fines need to be effective, not excessive

It is true that the new penalties are a quantum jump over the rates prevailing earlier. 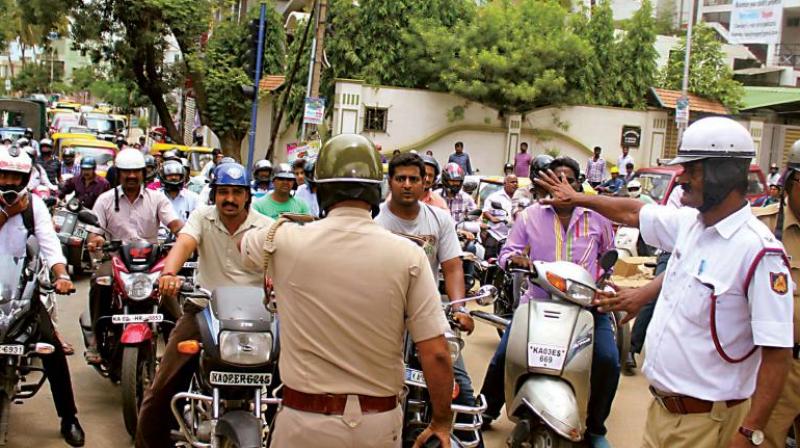 The intention of the government was, quite clearly, not to indulge in incrementalism, but to impose a qualitatively new regimen of traffic fines.

The steep increase in challan rates for traffic violations raises some interesting issues that go beyond merely the legal aspects of this move. Public opinion is divided on the desirability of the new measure. There are some who believe that this will bring in much-needed discipline and compliance in traffic regulations. Others aver that the increase is far too severe, and imposes much too high a burden on the ordinary citizen. The truth, as always, lies somewhere in between.

It is true that the new penalties are a quantum jump over the rates prevailing earlier. The intention of the government was, quite clearly, not to indulge in incrementalism, but to impose a qualitatively new regimen of traffic fines. Thus, the penalties mark a definitive break from the past. Now, if you jump a red light you will have to pay not Rs 100 as in the past, but Rs 1,000 — a ten-fold increase; if you break the speed limit, you will be fined not Rs 200, but Rs 2,000; if you drive without putting on a seat belt the fine is not Rs 300 as before but Rs 1,000; if you drive after drinking you will pay up not Rs 2,000 as earlier, but Rs 10,000; if you drive without a licence, you will pay not Rs 500 but Rs 5,000, again a 10-fold increase. And so on. Besides, some new penalties — much-needed, it must be said — have been added. There was no fine earlier for not giving way to an ambulance. Now, if you commit this crime you will pay Rs 10,000. Similarly, earlier there was no penalty for a minor driving a car. Now, the fine is Rs 25,000, and three years’ imprisonment, along with the annulment of the registration of the car, with the owners of the car being held culpable.

The purpose behind this very sharp increase is to compel vehicle owners to obey traffic rules. The obvious reasoning is that unless an element of draconian deterrence is brought in, people will continue to give scant regard to traffic regulations. That this was, indeed, the attitude until now is apparent by the prevailing traffic cacophony on our roads. India must rank as one of the most undisciplined nations in the world as far as compliance with traffic rules is concerned. Drivers cock a snook at rules, break traffic lights with impunity, honk in no-honking zones, drive in any lane they wish to, overtake from any direction, care a damn for speeding regulations, consider seat belts or helmets an optional accessory, ignore requirements of pollution control certificates, do not carry with them necessary documents pertaining to the vehicle, and, on the whole, treat the roads as their personal fiefdom.

There was, therefore, undoubtedly a need to bring greater order and compliance in this area. But what is interesting — and a window to our psyche as a people — is the government's conclusion that only harsh deterrence measures, of the kind that have been brought in now, makes us behave. In other words, we inherently lack a sense of civic responsibility. We do not volitionally — and as an extension of our responsibilities as a citizen —comply with rules. We do not respond to exhortation. We are not willing to change our behavioral patterns on our own. What we need is the fear of the danda — or in this case hugely amplified fines — to realise the importance of the rule of law.

In this sense, are we basically different from citizens of other countries? Traffic rules are obeyed in the vast majority of countries, even in those where such heavy fines are not imposed. Why does this inbuilt mechanism for compliance with public rules not kick in where we are concerned? There are important lessons for us as a society, if we accept that only severe deterrence can make us better citizens. Should we then not have similarly high fines for public littering, for breaking a queue, for desecrating a listed monument, or vandalising public property? Does this mean that we then need to change our entire mindset with regard to becoming a better civil society?

There is another important aspect to this. Can we transform a penal regimen in isolation, without also changing the system by which the regimen is administered? It is no secret that the police see traffic challans as a lucrative source of personal revenue. How do we stop this corruption, and do these vastly increased fines not open the golden gate for traffic policemen to substantially increase their unaccounted income? What does this situation mean then for the truly law-abiding citizen? How do we eliminate arbitrary harassment of drivers at the receiving end of corrupt police officers? This is particularly true for the vulnerable group of commercial vehicle owners. They are a favourite of corrupt cops, and usually have little recourse but to pay a bribe, on any trumped up charge that the traffic police conjures. The essential point is that one cannot reform a system without holistically dealing with all its consequences, and affecting collateral change as is imperative.

On balance, the bitter truth appears to be that deterrence is required for any society. It is especially relevant for us, for we appear to be resistant to changing for the better unless there is an element of fear about breaking the law. Perhaps, this truth was realised millennia ago. Chanakya, who was otherwise a democrat, and certainly not as ruthless as he is made out to be, was clear about one point: to run a society in accordance with rules for the well-being of all, you need to have a deterrent system in place. That deterrence system must be fair, impartial and transparent, and effective but not excessive. Has Mr Nitin Gadkari borrowed at least half a page from Chanakya’s Arthashastra?

The writer, an author and former diplomat, is a member of the JD(U). The views expressed are personal.