Opinion   Columnists  22 May 2021  Gautam Moorthy | An out of the box solution to end Israel, Palestine row
Opinion, Columnists

Gautam Moorthy | An out of the box solution to end Israel, Palestine row 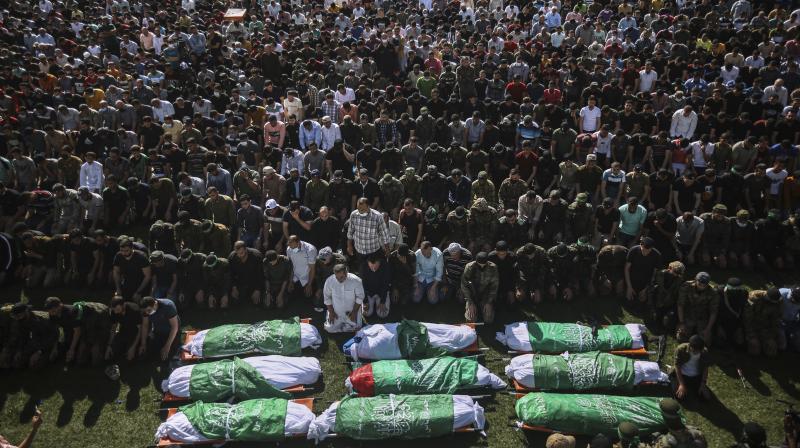 Palestinians pray by the bodies of members of the Izzedine al-Qassam Brigades, the military wing of Hamas movement, who died in Israeli bombardment of a tunnel, during their funeral in Khan Younis, southern Gaza Strip, Friday, May 21, 2021. (Photo:AP)

As the entire world heaved a sigh of relief, even if with fingers crossed, as the Egyptian-brokered ceasefire came into effect at 2 am local time on Friday, May 21, ending the devastating 11-day conflict that saw over 240 fatalities, most of them civilian, the question uppermost on everyone’s mind is if this respite is ensure a permanent truce and an end to the conflict. The conundrum and the antagonism that led to this dispute is the unshakeable belief by both the Israelis and the Palestinians that they are the rightful owners of the land for which they are fighting.

Without going deeply into the genesis of the dispute, it is worth recollecting that much headway has been made on the path to peace, keeping in mind the situation in 1948. Starting with the first Camp David Accord in 1978 between Israel and Egypt, which resulted in Egypt granting full recognition to the State of Israel in return for the Sinai Peninsula, to the Abraham Accords of 2020, much water has flown under the bridge. In between, the Oslo Accord of 1993, leading to the much-publicised Camp David Accord of 1993, promised a two-state solution which at the last minute failed mainly as Israel refused the right to return of all displaced Palestinians.

With most Arab countries grudgingly accepting the existence of the State of Israel (with back-channel diplomacy active to get Saudi Arabia too on board), the main parties in the dispute, besides Israelis and Palestinians, are the Iranians. Iran is implacably hostile to Israel and to a large extent to Saudi Arabia as well. Iran is known to fund and support Hamas in the same way as it funds and supports Hezbollah in Lebanon. Violence has been the rule rather than the exception since the first “intifada” of 1987, with brief lulls in between. Therefore, is there any possible solution to end this never-ending cycle of violence? There possibly is, and it is perhaps as “out of the box” as it can get.

Briefly, before the 1967 war, the West Bank was a part of the Kingdom of Jordan from 1948 onwards. Jordan eventually relinquished all claims on the West Bank in 1988 and even deprived the Palestinians of their Jordanian citizenship. The Gaza Strip has had a more convoluted history and was occupied by Egypt till 1967, when it was captured along with the Sinai Peninsula by Israel. Subsequently, as a result of the Israel-Egypt peace accord, Egypt relinquished all claims on Gaza, agreed to keep the Sinai Peninsula demilitarised and created a small buffer zone between it and the southern border of Gaza. In 1994, as a result of the Oslo Accords, Gaza came under the control of the Palestinian Authority. Since 2007, however, it has been completely under control of Hamas, which views the Palestinian Authority, now called Fatah, with contempt and is implacably opposed to it. In 2005, Israel withdrew unilaterally from Gaza: its military as well as its settlements. After ousting Fatah, Hamas took complete control of the territory in 2007.

The situation today is that the Palestinians remain hopeful of regaining the West Bank without Israeli settlements, and of a restoration of peace in the Gaza Strip, with the ultimate aim of the establishment of a full-fledged independent Palestinian state. For this to happen, with of course Israel’s grudging acceptance, a new paradigm needs to evolve. Having the same belligerents talking to each other again through well-meaning intermediaries is not going to yield any new result. All that will come of it will be more of the same.

Hence, as a forerunner to any eventual Palestinian state, given the current impasse, and to forestall any further bloodshed, there exists a strong case for Jordan to reclaim the West Bank and for Egypt to reclaim the Gaza Strip, of course with Palestinian consent. Both Jordan and Egypt have good diplomatic relations with Israel. Both have the trust of the Palestinians. If they are sovereign owners of the land, their locus standi improves vastly compared to them being just honest brokers. Their ownership and control of the territories will bestow upon them the necessary authority to deal with Israel on equal terms and not as mere supplicants, as is happening now with Fatah. Once these lands become their sovereign territories, the issue of settlements on the West Bank can be taken up in due course. It must be reiterated that Israel has to withdraw all its settlements in Gaza. The issue of settlements in the West Bank is not set in stone. In this way, Hamas can be de-fanged on the Gaza Strip.

Such a proposal, it is felt, would have the backing of all Arab countries. Iran too can be brought on board. Without Iran’s support, Hamas cannot be the disruptive force that it is today. Subsequently, after peace is established, both Jordan and Egypt can relinquish their claims on the West Bank and Gaza respectively to pave the way for the establishment of a full-fledged sovereign Palestinian state. This idea may seem hare-brained at first. It is however predicated on the fact that the belligerents want a just and durable peace with an end to violence and the desire for wanting peace is not as hare-brained as remaining in a perpetual state of conflict and suffering.