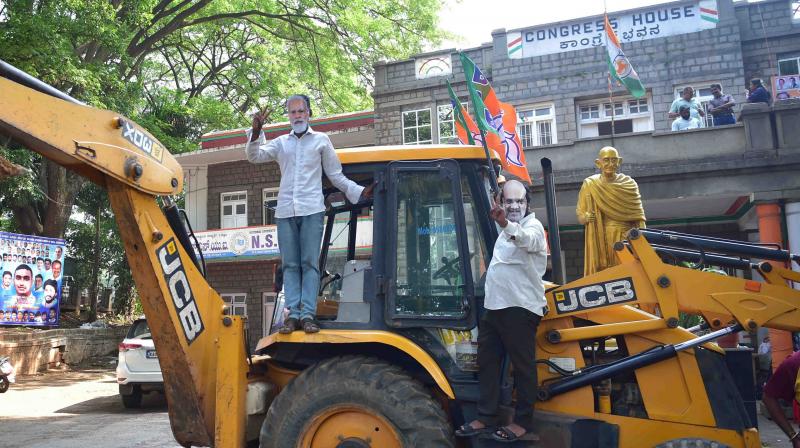 A Member of Youth Congress wear PM Modi mask during a protest against the central government for the hike in fuel,LPG price and the using bulldozer in jahangirpuri encroachment in Delhi, in Bengaluru. (PTI)

There was a clash between groups of Hindus and Muslims near a mosque in Jahangirpuri in northwest Delhi on the evening of Sunday, April 17, as a Hanuman Jayanti procession called Shobha Yatra was passing by the mosque. There was stone-pelting. Some people were injured. The police used teargas, arrests were made and a First Information Report filed. The police says that permission was not given for the third procession of the day as the letter seeking permission for the procession came late. The details are hazy, as always. No one knows how the clash happened after the heated arguments. An FIR that was registered was by a policeman who was injured. People were arrested.

On Wednesday, the North Delhi Municipal Corporation sent in its anti-encroachment squad with the bulldozers to the mosque area where the clash took place on Sunday, and a kiosk selling soft drinks was pulled down and a nearby spare parts shop was razed. An extra force of 1,250 Central Reserve Police Force jawans was deployed in the area prior to the demolition work. Senior Supreme Court lawyers like Dushyant Dave, Prashant Bhushan and Kapil Sibal brought the matter to the notice of the bench headed by Chief Justice N.V. Ramana. The court ordered that the demolition work should stop, and the status quo maintained. But the demolition continued because the municipal officials said that they did not receive the court orders. Mr Dave had to go to the Chief Justice’s court again and to tell him that the demolition was still continuing. Then the CJI directed the court registrar to emphatically communicate the orders to the officials concerned.

One of the incidental aspects of the situation is that the demolition squad brings down structures owned by Muslims. The riot on April 17 occurred near a mosque. A determined BJP government at the Centre — the municipal corporations come under the jurisdiction of the Union home ministry in the bizarre administration structure of the National Capital Territory of Delhi — shouts from the rooftops, through the pro-Narendra Modi government television news channels, that the law was being followed and no one should object to encroachments being demolished. And once anyone mentions the word “Muslim”, the BJP representatives begin to cry out aloud that this is minority appeasement and “pseudo-secularism”.

This is not an unusual situation. It would be foolish to be shocked by the fact that there was a clash between groups of Hindus and Muslims near a mosque as a Hindu religious procession passes by, and the reasons for the clash are not far to seek. The clash itself cannot be laid at the door of the barely-concealed anti-Muslim bias of the BJP and its other ideological affiliates. Communal clashes from the 1920s onwards have been a regular feature of modern India’s political life. BJP spokespersons are loud in their protestations that their party does not discriminate against Muslims and all that it wants to do is to preserve law and order, and that it is not the BJP’s fault if the law is broken by Muslims, and it does not matter that they are poor Muslims, who are punished under the law. Of course, the high-handedness and the illegalities that can be committed under the guise of the law are too well-known to Indians.

The BJP is not afraid or ashamed to target Muslims under the cover of the law because it is fetching the party rich electoral dividends. It would be stupid to speak about morality in politics. The BJP and its friends are only too eager to counter any criticism by saying that the Congress had pampered the Muslims, and this is payback time. What the Supreme Court does or does not do, what lawyers who want to defend the weak and the poor — and of course if the weak and the poor happen to be Muslims, then they are committing a grave political sin and they deserve to be labelled and shamed. There is then an undeclared low-intensity communal war that the BJP is waging wherever it is in power, and it cannot be criticised or penalised because it is exercising the political freedoms guaranteed by the Constitution. The political parties and civil society groups that are fighting against the BJP’s communal politics carry a huge burden of acts of omission and commission, and the BJP unsparingly uses that ammunition.

The question of whether the Hindu-Muslim animosity the BJP wants to keep simmering is good for the country seems unimportant because the electoral support that the BJP enjoys in Hindi-speaking north Indian states reveals that there is an undeniable undercurrent of hostility of Hindus towards Muslims. The BJP is tapping into it, and it cannot be faulted for taking advantage of the communal fault lines. The Muslims will survive the constitutional onslaught because no people can be trampled upon, and their self-respect razed to the ground. There will therefore continue to be outbreaks of communal violence.

India, at the social level, divided by caste and religion, and there will be caste and communal violence. It is not enough to lament that the BJP has destroyed secular India. There never really was a secular India on the ground.

Dr B.R. Ambedkar rightly observed in his closing remarks in the Constituent Assembly that creating a system of political equality will not be sufficient if there is deep-rooted social and economic inequality. And we must add that even if inequality is removed in all senses, caste and communal prejudices will continue to simmer and periodically erupt into spurts of violence. This violence needs to be contained to the extent possible and if the BJP governments want to live off communal violence, there is no remedy.

In Europe, the religious wars between the Catholics and Protestants in the sixteenth and seventeenth centuries ended by the eighteenth century because the people were simply tired of sectarian violence. A majority of Hindus and the minority Muslims must wake up to the futility of hatred before communal violence can end. It may well take a long time, or they may continue to indulge in hatred. Of course, there will be many who will argue that one should not equate Hindus and Muslims over their hatred quotient. Hindu communalists believe Muslims are the culprits of communal violence, and the Muslim communalists believe that it is the Hindus. The clear political beneficiary of communal animosities is the Hindu-oriented BJP.