Opinion   Columnists  22 Apr 2022  Farrukh Dhondy | Did BoJo lie? I have a dream… of what may be coming next!
Opinion, Columnists

Farrukh Dhondy | Did BoJo lie? I have a dream… of what may be coming next! 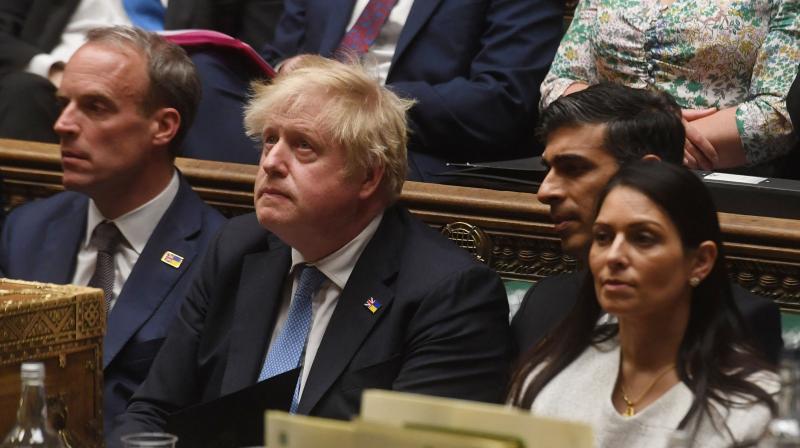 A handout photograph released by the UK Parliament shows Britain's Prime Minister Boris Johnson apologizing to MPs for the for the "partygate" fine and making statement to MPs on the situation in Ukraine following its invasion by Russia during the first session after the on Easter Recess, at the House of Commons, in London, on April 19, 2022. (AFP)

“In the honeyed glades my beloved dances

To my fluted melodies, avoiding my glances

Why is she shy to declare her devotion?

It’s plain to see in her every bodily motion.

The eyes declare — why long for more?”

We live, as the Chinese say, in interesting times. Britain’s Opposition Labour Party had tabled a motion forcing BoJo, the Prime Minister, to be referred to the House of Commons’ Privileges Committee to decide whether he had lied to Parliament. As the debate progressed on Thursday, it became clear that BoJo didn’t want his party to oppose this motion. He wants to give the country the impression that he is open to any investigation as he has nothing to hide. The motion was passed and the “Privilegewallas” will now investigate!

If he is found guilty, it’s not just naughty boy stuff with a slap on the wrist — for ministers it is, as we used to say in my reckless childhood in Poona watching idiotic Western movies, “Curtain Call at Cactus Creek”! Resignation time!

Days before this vote, two issues came to the fore in Parliament. The first was a proposal by the home secretary, Priti “Clueless” Patel, to send all the seekers of asylum in Britain to “camps” in Rwanda. She proposed to pay the Rwandan government millions of pounds to accept and house the refugees attempting to seek asylum in Britain. She doesn’t want them to remain here. Her proposal was widely opposed by the Opposition parties and human rights activists. After her debate, BoJo dramatically entered Parliament and apologised for “Partygate”, a term used for the fact that he, his wife and the chancellor of the exchequer, Hedgie Sunak, were fined by the police for meeting in “party gatherings” and defying the rules of isolation that they themselves had set. It was, said the Opposition, a resigning matter.

So, what happens now? The “privilegewallas” may conclude that BoJo didn’t knowingly mislead Parliament. They could rule him innocent. But, like Martin Luther King, I have a dream and in tune with the great man’s nocturnal subconscious activity, I too think I am on the side of democracy and natural justice.

So, what then, gentle reader, do I see in my dream, or like Alice in the Looking Glass? I see the Privileges Committee condemning BoJo in the strongest terms. He is guilty of lying to Parliament and resigns. The Tory party is thrown into turmoil. They can’t agree on a successor. There are moves in Parliament to dissolve it and call an election. The Tory MPs, preferring to keep their seats even as Opposition MPs, rather than go down with BoJo, agree. The watching public bravely elect a coalition with Labour leading it.

The first of these specifies that those who are targeted for shipment to Rwanda have to fill in seventy-five forms send them to the Rwandan embassy and then to a newly-formed Committee for Immigrants’ Advancement (CIA) chaired by the newly-ennobled Lord Tariq Ali of Wahyatt. Lord Ali has the privilege — I mean duty — of choosing which individuals should fill in the forms and be targeted for deportation. Angela’s second amendment to the Rwanda bill is that it shall be retrospective. So, the daughters, for instance, of immigrant refugees from Uganda in the 1960s will be eligible for such deportation to the heart of Africa. Now I am personally acquainted with Lord Ali of Wahyatt and know him to be a fair and humane person. He is the perfect choice for the job and I am sure he will only consider deporting those individuals who are a menace to British society. I am also sure that Priti Clueless, having originated this fascinating and unusual legislation, will be delighted that it has been passed into law. Unless, of course….

And there will, after years of the drift of the UK between all manner of poles of hypocrisy, be other reforms. The breaking of the law by defying it and partying when it was forbidden will be retrospectively made a criminal offence. Not being murder, rape or other serious breaches of the law, this will carry a sentence of community service — small jobs such as cleaning red wine stains from sofas and carpets every day for a period of not less than three years.

Despite BoJo’s boasts of being Ukraine’s staunchest ally and sanctioning every billionaire who earns money from Russia, it will be discovered that his administration had a very large-holed net to trap such slimy fish. There are for instance foreign registered firms, let’s say in the IT industry, which trade or traded, until recently, in billions of rupees, roubles and international currency with Russia. The gains from these Russian earnings have, on occasion, landed up in the possession of “non-doms” who live at well-known addresses in, for instance, London. Their funds and houses will now be subject to immediate, sanctioning confiscation.

No doubt the former Tory chancellor, Hedgie Sunak, will be biting his lip at the thought that he had allowed this oversight and these particular “non-dom” billionaires to get away with their, at least part-Russian, gains on his diligent watch.