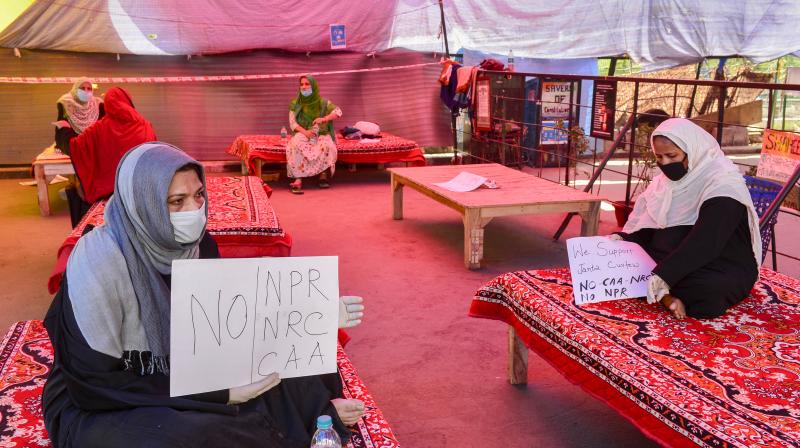 Sometimes, when a global crisis occurs, as we are now seeing with the corona pandemic, it should compel people to behave differently. This is because to continue with past practice, as though nothing needs to change, is suicidal. PM Narendra Modi, in an address to the nation, has reiterated the serious nature of the problem, and outlined what needs to be done by ordinary people in the joint effort to contain and defeat the virus.

A key aspect of this endeavour is what is now called "social distancing". In practice this means that large meetings -- of even a few dozen people -- should not take place, period. While the government is working to enforce this -- schools, colleges, malls, cinema halls, even offices partially -- have been closed, and non-government actors are enforcing human congregations at their own level, two sets of people appear to be immune to such good sense.

The first are Muslim clerics who insist that the Friday congregation at mosques should continue; and the second are the protesters at Shaheen Bagh in Delhi.

I am aware that in saying this I will immediately be targeted by well-meaning reflex liberalists as attacking Muslims only. This is far from the truth. It is a matter of record that while I am a proud Hindu, I have staunchly believed in the non-negotiable imperative of respecting all faiths. But respect for all faiths does not mean that one shies away from saying what one believes is right, irrespective of which religion it applies to.

It is for this reason that I was very critical of UP CM Yogi Adityanath’s refusal to cancel the Awadha Ram Naumi mela. I am relieved, however, that he has done so now. If a diehard Hindutva votary like Adityanath can cancel a festival so popular among Hindus, keeping in mind the larger goal of containing the coronavirus, why can’t the protestors at Shaheen Bagh, most of whom -- but not all -- are venerable Muslim ladies, call off their protest for the moment, and recongregate, if necessary, when the medical crisis is behind us?

Equally, why can’t Muslim clerics instruct their religious brethren to temporarily forsake the gathering in mosques on Fridays, and offer namaz at their own homes? After all, major Hindu temples -- like those at Tirupati, Siddhivinayak and Puri -- have closed their doors, even when thousands of devotees used to visit them every day.

I understand that religious faith and practice are very important to believers, but sometimes there are occasions when larger national - and even international - imperatives require enlightened decisions for the larger public good, including that of the believers themselves. The flock may not wish to change established religious practice, but it is precisely at this time that the leaders of the religious community must come forward and persuade it to take the right decision given the circumstances prevailing.

The anti-CAA-NRC protestors at Shaheen Bagh have the sacrosanct right to protest. This is guaranteed by the Constitution, and by the fundamental tenets of a vibrant democracy. The attempt to demonise them -- as some leaders of the BJP and the ultra-right -- are consistently attempting to do, is wrong. The grit and determination of the elderly ladies at the protest site is also worthy of both respect and admiration. In voicing their opinion against the CAA-NRC they are in no way being anti-national, or seditious. The protestors have braved freezing winter nights and stuck to their convictions. However, the fight against the corona virus, where large  congregations of people, especially in close proximity, poses a serious threat, and can advance community spread of the disease, requires the protestors to heed the call of greater public interest. CM Arvind Kejriwal has said that gatherings of more than 50 people should not be held.  This instruction needs to be followed.  The protestors at Jamia have done so. Those at Shaheen Bagh need to follow suit.

We live in highly polarised times, which the ruling dispensation has verifiably contributed in creating. But some matters should not be automatically seen from the secularism versus anti-secularism debate. Those who believe in secularism as an article of faith, must also have the courage to say to those very minorities for whose interests and protection they are fully committed, that they must act responsibly, in the interests of a larger goal that is pivotal for humanity as a whole. As president Kovind has rightly tweeted: "The coronavirus strikes beyond man-made distinctions of religion, race and region. We suddenly realise that in the face of a grave mortal threat like the present one, we have but one identity - we are human beings."

It is good that Muslim clerics have appealed to community members to spend the Shab-e-Meraj, the night when Prophet Muhammad is believed to have ascended to the heavens, in prayer at home and not in mosques. That night falls today, on Sunday. Some religious leaders of the Christian community too have issued statements discouraging the faithful from church congregations on Sunday. It is time now for Shaheen Bagh to be put on hold, especially since two of its lead organisers have been tested positive for the virus. Equally, Friday congregations at mosques should be forthwith suspended, and Muslim religious leaders should play the lead in enforcing this. Religion teaches us to serve god by serving humanity. This basic lesson needs to be internalised by all.