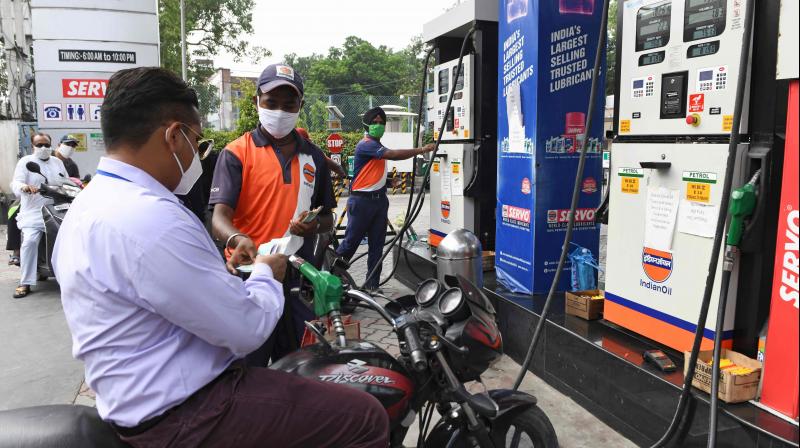 The nations that follow India on the list of those with high taxes are all European nations, plus the United States and Japan. (Photo: AFP)

The price of petrol has crossed Rs 100 in some parts of India for the first time. A parallel development is that of the total revenue that the government receives — 33 per cent, or one-third now comes from the tax on fuel. India’s consumers pay the highest rate of tax on the petrol and diesel that they consume. The nations that follow India on the list of those with high taxes are all European nations, plus the United States and Japan. These are of course places where consumers are much better off than us and the government can in fact extract money from them without significant hurt.

In India, the majority of consumers are poor. And a tax on fuel affects all of us equally and hurts the poor disproportionately. The autorickshaw owner and the Uber driver pay the same to fuel up their vehicle as the corporate executive and or business tycoon. This makes very little sense. Ideally, taxation should be focused on those who can afford to pay more, and this is through direct taxes like income tax. But this has not happened in India for a variety of reasons. The base of people who file their income-tax returns has gone up, but the actual money that comes in as direct taxes has not gone up proportionally.

The other reason that taxes from fuel have gone up as a proportion of all taxes is what has happened to the Goods and Services Tax. This was meant to replace a series of other taxes and create a single market where more trade and more commerce would happen, expanding the economy. But the GST was not able to produce as much revenue as the taxes it replaced. And the market has not grown. Indeed, in the last 36 months, the Indian economy has slowed significantly, falling from around eight per cent growth in the quarter starting January 2018 to around three per cent in the quarter starting January 2020. And in the period after that, the economy has actually contracted for the first time in decades. And so, the short-term prospects for growth are not good, and the government must look around for immediate ways in which it can fund itself. The easiest way is through taxes on fuel.

Petrol and diesel had been deregulated before Prime Minister Narendra Modi took office. The logic of deregulation was that the Indian State kept subsidising the consumer even when the price of crude rose globally, putting the mostly state-run oil businesses here at a loss. The consumer was protected no matter what the price of crude was. But now the reverse has happened. The government is protected no matter what the price of crude is. If the price goes down it takes more profits and does not lower the retail rate of petrol and diesel. If the price goes up, it hikes up the rates further. This was not the purpose of deregulation.

The Prime Minister says that it is not his fault and previous governments are to blame for keeping India dependent on imported crude. But that is the case with all the world’s nations who do not have a reserve of oil that can be tapped. Alternative sources of energy are a recent phenomenon and their ability to match fossil fuels in terms of price is something even more recent. We should know that in the area of petrol and diesel in automobile use, this parity has still not come.

Petrol and diesel are very energy dense. About 50 kg of fuel or a full tank can take the car for about 700 km. For an electric car to do that, it needs a lithium ion battery pack that must be at least 45 or so kilowatt hours. The price of this battery alone is around $5,000, and so approximately `4 lakh. Add the rest of the car and the minimum cost of a vehicle that can do the same range as a petrol or a diesel-driven car can do today is around `10 lakh, which is out of the budget for three-fourths or more of India’s car buyers. This will change over time and the cost of battery packs will fall as more and more nations take to electric vehicles for environmental reasons. But it is wrong to assume that it could be done today and certainly wrong to assume it could have been done in the past.

The last aspect is that of infrastructure. Lithium ion batteries in cars take about 10 hours to charge at home, assuming all car buyers have a garage with access to electricity. America, Europe and China have tens of thousands of direct current fast chargers in networks that span their nations.

This enables cars to charge up in about half an hour or so. India does not have these networks because the government has not built them. Even if all cars today were to magically become electric and not dependent on fossil fuel, where would they be charged? That the Prime Minister did not say.

The reality is that no matter what Jawaharlal Nehru or Indira Gandhi or Atal Behari Vajpayee did, we would be dependent today on petrol and diesel. The question is whether the government should extract such a large share of tax from us. That is a question only Narendra Modi can answer and not Jawaharlal Nehru.