Frankly, it’s not just bizarre but deplorable to frame differences over the efficacy of Covaxin as issues of national pride 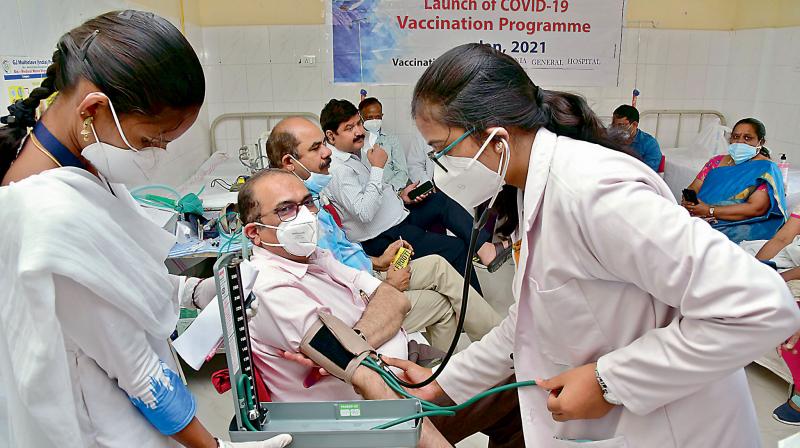 A file photo of the doctors from Osmania General Hospital who were vaccinated ( Image Source: DC Image)

I’m used to schoolboys squabbling, hacks quarrelling and, even, fishwives shouting like alley cats but doctors and scientists lunging at each other’s throats came as a complete surprise. Unfortunately, that’s what we have witnessed as differences of opinion, particularly over Bharat Biotech’s Covaxin vaccine, transformed into vicious disputes and nasty divisions. The fact that this is not edifying is the least of my concerns. More important, I fear it is fuelling vaccine hesitancy, not just among the uninformed general population but also among those who are well aware of the need for vaccination.

In its main front-page story, Tuesday’s Hindustan Times reported that the average turnout was “less than 50 per cent” for the first three days of vaccination. Out of 7,704 sessions, where 100 people per session should have been vaccinated, only 381,305 people have taken the jab. What makes this low turnout worse is that at this stage it is health workers who are getting vaccinated. These are the people who understand the importance of vaccination. Normally, they don’t need to be convinced. So, if they’re backing off, that would suggest a possibly bigger problem.

It’s this problem that I want to focus on today. At its heart, I would say, is the controversy over the efficacy of Covaxin which, in turn, has been made considerably worse by an inexplicable attack by 49 doctors and scientists on the experts who were the first to raise legitimate questions about the vaccine. Far from allaying the concerns, which are legitimate and need answering, these 49 gentlemen seem to suggest it is anti-national to raise valid doubts and it is our patriotic duty to grit our teeth and take the vaccine. Well, that is an attitude almost calculated to rile people. And it certainly had that effect on doctors, nurses, ward boys and other health workers.

To understand my point, let’s come to the perceived problem with Covaxin and then turn to the inflammatory critique it has unnecessarily provoked.

The problem arises from the fact Covaxin has been cleared “for restricted use in emergency situations … in clinical trial mode” although its efficacy data from Phase 3 trials is not available. Two of India’s top virologists, Gagandeep Kang and Shahid Jameel, have questioned this. Their reasons for doing so are simple. Though safe, we still don’t know how efficacious it is. As they have explained, without credibly established efficacy data we don’t know if Covaxin works or how well it works. It’s being given in the belief that it will but if that turns out not to be the case not only will that seriously damage trust in vaccination, but it could also mean many recipients, who think they are protected and inevitably drop their guard, could end up getting needlessly infected. If this happens, it can only add to our problems.

However, the case against using Covaxin goes further. Experts also say the argument it is an acceptable shortcut in a pandemic doesn’t hold. First of all, both cases and deaths are a fraction of what they were when they peaked in September. So, there’s no emergency now.

Second, we have other vaccines with credibly established efficacy that we could use. And they’re available in sufficient quantity. So, as Dr Kang told me in a recent interview: “I would ask why would you want to give a vaccine without efficacy emergency-use authorisation in these circumstances?”

Now the government’s doctors have advanced a third reason for prematurely pushing Covaxin. They claim it could be better at tackling new strains of the virus. The problem is that there’s absolutely no data to support this. Both Dr Kang and Dr Jameel say it is simply “an hypothesis”. This time Krishna Ella, chairman of Bharat Biotech, which has made Covaxin, agrees. On January 4, he publicly admitted that “it’s only an hypothesis right now”. Isn’t it odd that the government should think otherwise?

In fact, on January 4, Dr Krishna Ella went one step further. Most people have forgotten about this additional point which is why it’s worth recalling. “Just give me one week’s time (and) I’ll give confirmatory data”, he said. Two weeks and more have passed but he hasn’t done so. Instead, he’s gone silent on the subject. It was in the face of such well-established concerns that 49 doctors and scientists decided to vindictively pounce on those who initially raised them. In a statement released on January 14 and within hours tweeted by the health ministry, they attacked what they called “irresponsible statements by vested interests … defaming (the) Indian scientific community and casting aspersions upon its integrity by making politicised statements about the recent research in the field of Covid-19 vaccines”. Referring to doubts about Covaxin as “reprehensible utterances”, the 49 sought to wrap themselves in the flag by asserting they have “a vision to make India a global leader in scientific research” and “a name to reckon with”. And, presumably for Prime Minister Narendra Modi’s benefit, they added they are “atma nirbhar”.

Frankly, it’s not just bizarre but deplorable to frame differences over the efficacy of Covaxin as issues of national pride or as an attempt to run down Indian achievements. Yet that is what the 49 did. No doubt the sound of the patriotic drum they tried to beat was music to their ears, but it turned out to be a discordant and disturbing note for the doctors, nurses and assorted health workers who they imagined would be reassured. It seems to have put them off in very sizeable numbers. As I said earlier, they’ve probably made matters much worse.

So, if we are going to ensure that Indians in their hundreds of millions get willingly vaccinated, we must be fully transparent about the vaccines we are using and their efficacy and not attack as “anti-national” all those who raise legitimate concerns. But if that doesn’t suffice to resolve the spreading doubts, we might have to consider temporarily withdrawing Covaxin till its efficacy is sufficiently and credibly established. Remember, the important goal is to get the largest number of people vaccinated. Which vaccine is used should be a mere detail.