Patralekha Chatterjee | Get priorities straight in time of a pandemic

Amid the deaths, disease, debt and despair, guess what some state governments in India are concerned about? 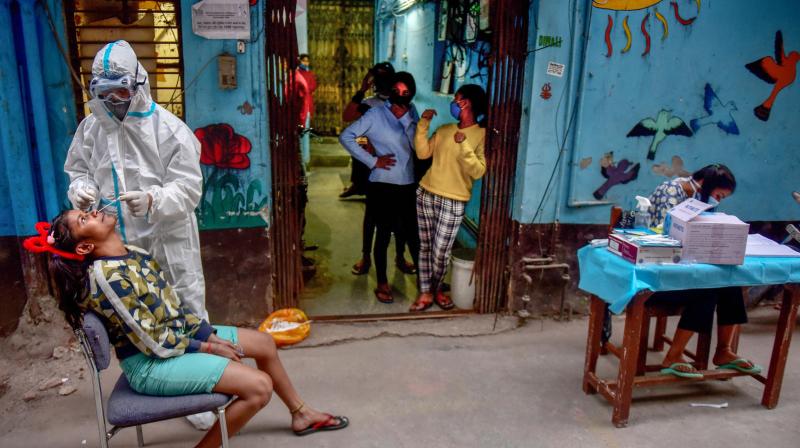 The number of Indians infected by Covid-19 has crossed 90 lakhs. Over 1.3 lakhs have died of the virus. The economic distress in the wake of the pandemic is palpable. Millions have seen their earnings drop.

Amid the deaths, disease, debt and despair, guess what some state governments in India are concerned about? They are worrying about who one marries, whether the person is of the same faith or a different one, and if there is any hint of conversions, forced or otherwise.

In the last few weeks, several BJP-ruled state governments have been ratcheting up tension by publicly announcing their plans to bring about legislation to outlaw what they describe as “love jihad”.

Last week, it was the turn of Madhya Pradesh, where night curfew has now been imposed in Indore, Bhopal, Gwalior, Vidisha, and Ratlam districts from November 21 as Covid-19 cases surge. In the middle of all this, Madhya Pradesh home minister Narottam Mishra found time to declare that a “love jihad bill”, which intends imposing five years of rigorous imprisonment for “violators”, will soon be introduced in the state Assembly.

Madhya Pradesh is not the only state stoking sentiments around the “love jihad” conspiracy theory, which pivots around the belief that Muslim men in India are part of some organised campaign to convert Hindu women to Islam. Four other BJP-ruled states — including Uttar Pradesh and Haryana — are following the same playbook.

Earlier this month, Haryana home minister Anil Vij announced that his state was planning to bring in a strict law to control “love jihad” cases and soon a committee would be constituted to draft the law. The tourism minister of Karnataka, also BJP-ruled, has tweeted that the southern state would bring in a “a law banning religious conversions for the sake of marriage”. Assam minister and BJP Northeast pointperson Himanta Biswa Sarma has joined in the chorus against “love jihad”.

What is behind this rush for laws to outlaw “love jihad” in the time of a pandemic?

It is clearly a rallying cry to mobilise BJP supporters. But that is only part of the story.

Think of all the issues and questions that gets pushed off the news cycle each time “love jihad” grabs headlines. Public health experts like Anant Bhan and Hemant Shewade point out that India is far from being on the top of the pandemic and governments at the Centre and in states must focus on addressing the needs of those with Covid-19 and those who have other diseases. There is literally no time to waste.

Why then this noise about “love jihad” when in February this year, G. Kishan Reddy, Union minister of state for home in the Narendra Modi government, said: “The term ‘love jihad’ is not defined under the extant laws.” He also said: “No such case of ‘love jihad’ has been reported by any of the Central agencies.” Mr Reddy was replying to a question by Congress MP Benny Behanan in Parliament on “whether Central agencies have reported any case of ‘love jihad’ from Kerala during the past two years and if so, the details thereof?”

Mr Reddy also noted that Article 25 of the Constitution provides for the freedom to profess, practice and propagate religion subject to public order, morality and health. “Various courts, including the Kerala high court, have upheld this view,” he said in a written reply.

It is astonishing that in 2020, an adult woman in India is not seen as capable of making decisions on her own about herself and there are so many who are willing to believe that there is a vast conspiracy leading to young Hindu women being seduced and coerced into marriage by Muslim men under false pretexts. Hadiya Jahan’s case comes instantly to mind. Her family claimed that she was a victim of “love jihad”, despite her saying that that she had converted willingly. The Supreme Court subsequently restored the marriage. A Supreme Court-ordered probe by the National Investigation Agency into 11 cases of inter-faith marriages in Kerala has not found any evidence of forced conversion in any of the cases.

In India, there is no law barring couples from different faiths from getting married. Couples, including interfaith ones, can get married under a Special Marriage Act without changing their religion. The law, however, requires the registrar to post a notice about the intended marriage 30 days before the wedding and this has triggered many problematic situations, with families and right-wing groups trying to stir the pot if it the couple are from different faiths.

The All India Lawyers’ Association for Justice, a national lawyers’ collective, has condemned the announcements made by the BJP-ruled states to pass a law against “love jihad”.

In a statement, the association said that it “believes that every person has the right to marry or not, and to select their partners as per their will and desire… Governments, instead of pursuing a communal agenda that penalises those who exercise their constitutional freedoms, must take immediate steps to enact a law that would specifically cover the field of so-called ‘honour’ crimes.”

It is clear that charges of “love jihad” may not stick in court. It is also clear that the “love jihad” bogey is more a marker of the politics of intimidation than anything else. All this high-decibel talk about an imagined “love jihad” and the rush for laws to stop something that does not exist is worse than tilting at windmills — it is helping divert attention from far more pressing issues surrounding the pandemic.

We can neither afford deepening of fissures nor diversions.