Lawmakers and their law-breaking progeny

The powerful need to have their egos massaged, and the supplicants must outdo each other in the most abject display of sycophancy. 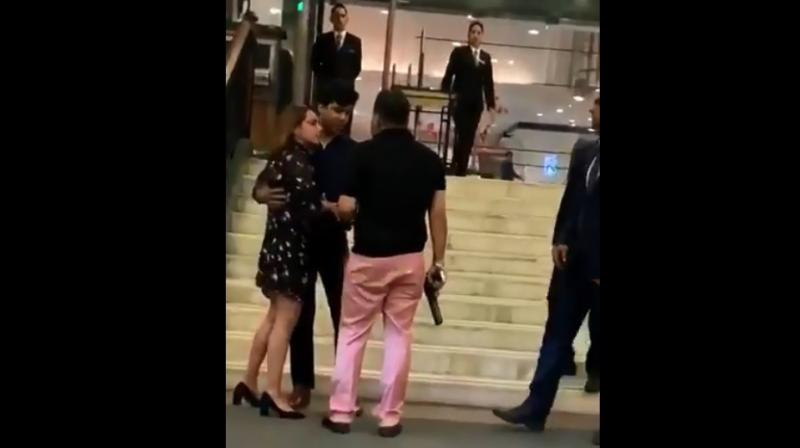 The police booked Ashish Pandey, son of ex-BSP MLA Rakesh Pandey, for allegedly brandishing a gun at guests and threatening them in foyer of The Hyatt Regency hotel in R K Puram. (Photo: Screengrab)

On May 7th, 2016, Rocky Yadav, alias Rakesh Ranjan, son of JD(U) lawmaker Manorama Ranjan, was on his way from Bodh Gaya to Gaya. He was enraged that the car in front of him was not giving him way. That car was being driven by a young class 12 student, Aditya Sachdeva. When Rocky finally overtook the “erring” car, he drew his gun and shot Aditya dead. Fortunately, it made little difference to chief minister Nitish Kumar that the criminal was his own party leader’s son. The case against Yadav was pursued relentlessly. In spite of key witnesses turning hostile, Rocky, his cousin, and the gun-toting guard allotted to his mother — all with him in his car — were convicted and sentenced to life imprisonment. Rocky’s father, who tried to hide his son when police was looking for him, got five years in jail.

This kind of VVIP lawlessness was again on display last week by the pistol-brandishing shenanigans of Ashish Pandey, son of a former MP of the Bahujan Samaj Party (BSP). This time the incident took place in New Delhi, in the premises of the five star Hyatt Regency, on the night — or the early hours of the morning — of 16th October.

Ashish Pandey, accompanied by some friends, including three UK-based women, had an altercation with Gaurav and his friend, Hina. When they were out in the porch of the hotel, Pandey pulled out a pistol from his car. Expletives flew fast and thick. A finger pressed on the trigger of the menacing gun was all it required for another Rocky Yadav-type tragedy. Fortunately, the hotel staff managed to separate the warring group. The entire unsavoury incident was captured on video, and has gone viral, replete with the most foul language used by all the participants — including the women. Last heard, Ashish Pandey “surrendered” to the police. His pistol and his abandoned BMW car have been recovered.

Why do so many progeny of the powerful in our country behave so outrageously? The answer is blunt: They believe they have the ordained right to do so. This feeling of being above the law is their prime inheritance. They have grown up in an immoral cesspool where the primacy of law but rarely intrudes. In our country — with few exceptions — politics corrupts; “successful” politics corrupts absolutely. Rocky and Ashish Pandey would most likely have grown up in an atmosphere where electoral “winnability” finesses ethics, and the race to power asphyxiates morality. They would have also seen how law-enforcing authorities — including the police — kowtow before the open misuse of power. Their brashness stems from a nurtured conviction that they are inherently above the law. In fact, they are encouraged to believe that they are a law unto themselves. Those who question them are labelled as self-righteous nobodies. Far from doing the right thing, they are idiotic enough to understand that might alone is right.

Ethical depravity is reinforced by visible money power. Such brats flaunt their affluence: expensive cars, designer clothes, lavish lifestyles, women as accessories, and limitless money to spend. Their parents believe that their ill-begotten money, earned through milking public office, must be used to spoil their children silly. Anything asked for must be made available. Conventional pursuits, such as doing well in school or college, are scoffed at as priorities of the less privileged. Not surprisingly, many of such children are school drop-outs, or have not made it to college. Those who do go to college acquire a degree through devious means. Cheating in exams is hardly a major offence when they have seen their influential parent buying an MLA or MP ticket, spending huge amounts beyond the electoral limit set by the Election Commission, and conspiring to bump off irksome political opponents.

The disgusting thing is that such brats are never short of hanger-ons. I have often said that in India there is only one real definition of an orphan: someone who has neither power nor money. The Rockys and Ashish Pandeys of this world have both. Hence, they are surrounded by those who encourage their dissolute debauchery. In India, it appears that to genuflect before the powerful is a socially acceptable goal unfettered by notions of rectitude. The powerful need to have their egos massaged, and the supplicants must outdo each other in the most abject display of sycophancy. In his path-breaking study of a village in Karnataka, M.N. Srinivas, the noted sociologist, says that “individuals who were economically and socially inferior seemed only too ready to agree with their superior, and flatter him when an opportunity presented itself.”

Sycophancy comes with an in-built antenna to understand the locus of power, and where benefit lies. Those who seek to benefit by enhancing their proximity to power must always say the right thing at the right time with the right degree of exaggeration and deference, so as to leave no doubt about their absolute loyalty and the unquestioned primacy of their benefactor. There is no conflict of morality here. As Tulsidasa aptly says: “Samaratha kar nahin dosha gusain, ravi paavak sursari ki nahin: (The powerful can have no faults; they remain as pure as the sun, the fire and the Ganga).”

When Manu Sharma shot dead Jessica Lal, or when Rocky Yadav put a bullet through the head of Aditya Sachdeva, or when Ashish Pandey brandished a gun at the Hyatt Regency, they were confident that their power, their influence, their money and their band of “chamchas” would see them through their act of criminality. What is truly worrying is that many of these brats will join politics to follow in the footsteps of their parent. It is a vicious cycle of depravity, legitimised by the unethical landscape that all of us — in some measure or the other — have conspired to concur with. The time has come to put a stop to this criminality, and this can only happen when the common man says: enough is enough.